A town of a glorious past
All the places

How things change! Centuripe, today resting on a knoll, almost forgotten by the frenzy of modern society, was at one time one of the most important Sicilian cities, certainly in the Siceliota epoch (7th century BC) and moreover in the Roman era (3rd – 1st centuries BC) . Few ruins remain of its glorious past. Demonstrating this is the fact that many old stones have been incorporated into newer buildings in the recent.

In the area of Acqua Amara, behind the town, there are a few ruins of ancient Roman baths and here and there, stones belonging to ancient structures. A few others, in Via Giulio Cesare, are monumental remains of old Roman structures called Augustali because they are from what was perhaps the seat of the sacred cult of Divo Augusto. 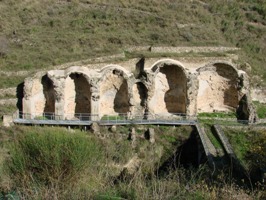 In a valley, a little outside the town in the area of Bagni, are the spectacular and Majestic ruins of other Terme Romane (Roman baths) (photo). The area was painted by travellers of ‘700 because of the splendour of these ruins. Today five enormous domes give testimony to the ancient splendor. Near Casino, for lovers of archeological adventure, there are a variety of hidden excavations. On Via Napoli there are ruins of a Roman cistern. 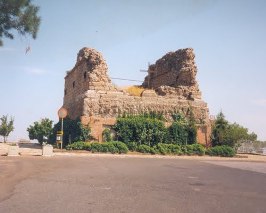 To the east of the built-up area on one of the five points of the star-fish that gives its shape to Centuripe, are ruins of the Roman mausoleum (tomb monument, photo), named Corradino. In the form of a tower, looking at this makes it easy to imagine the lost grandiosity.
On the opposite side with respect to the maosoleum, woven into the fabric of the city, is the so called Customs. In reality it is a cistern typical of the Roman era with the characteristic barrel vault. The position of this type of structure is almost embarassing in this urban context.
Close by, north of Mount Calvario, are the ruins of probably another cistern called Panneria. More ruins, always from the Roman era, are now being discovered. Under the Church of the Crucifix, one can see the few remnants of two rooms from a Roman structure. In the area of Difesa, on the road that takes you towards Catania, are the ruins of an oven while in the area of Mulinello those of a mill, both clearly from the Roman era.