Enviroments of Caltagirone
All the places 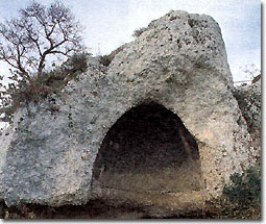 The Mountain is located north of Caltagirone and includes a series of small hills where there are over 1500 rock-cut tombs, of prehistoric origin. There is a type of burial chamber called Tholos, which is circular with a pointed arch and that is preceded by a small vestibule. This type of tomb is distinctively Mycenaean.

The necropolis of the Mountain dates from around 2000 BC. There are only tombs and the village or was built by huts, or was in one of several nearby sites. The Mountain can altimetrically be divided into three zones, each comprising several districts: High Mountain (the Di Bernardo and D’Alessandro districts), Middle Mountain (the district of Castelluccio), and Low Mountain (Rocca Contrada). The tombs have yielded finds such as bronze daggers and swords, buckles, Mycenaean gold rings, and ceramic vessels made on a wheel…the graves were originally closed by a door of stone and covered externally with additional stones.

Paolo Orsi, the most famous explorer from Sicily, managed to penetrate some of the tombs discovering that the numerous bronze objects have distinct similarities to Mycenaean crafts.  Inside the compartments were usually some funeral beds made of stone, and niches cut into the inner walls, in which to deposit objects. In one of these was found a beautiful bronze sword, preserved now in the museum of Syracuse, which once again has similarities to Mycenaean craftmanship. On the lower part of the Mountain, under the highway, is another Tholos tomb, this time, transformed into a Christian Church in 1500. Today it is in ruins but one can appreciate the remains of a  painting in the apse, a painting of the Madonna and the Crucifix unfortunately destroyed by vandals and the atmosphere. 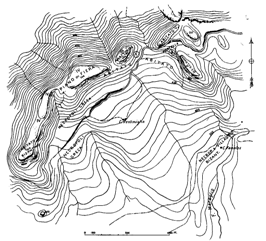 Monte San Mauro (photo, the map) South of Caltagirone, in the area formed by five hills, the Siculi peoples lived until the 7th century BC when the Greeks took their place. To visit the area of the excavations one must take Via Porto Salvo, behind Santa Maria di Gesù. On this little hill, that doesn’t go above 550 meters, lived a population that certainly had important contacts with powerful people. They were, after all, very close to Gela. On hill number three one sees a system of defensive walls that include some long spiked rocks along the north-west ridge. There are also a few square shaped dwellings and big pits used for the conservation of food. You can also see the ruins of an imposing rectangular building divided into two by a terrace wall that is supposed to have been the residence (an Anaktoron) of a local prince or a sacred building (reminiscent of that of Mount Bubbonia).

By foot from the third hill at Barravecchia, there is the necropolis. The numerous findings from San Mauro can now be seen in the Museo Archeologico in Syracuse while the well-known relief with the sphinxes and dance scenes are in the Museo Regionale della Ceramica.

Is located north-east of Caltagirone. It is a plateau that can be reached by taking the road that leads to Raddusa from the junction south of Caltagirone. After having travelled for about 4 kilometers, and past a steep downhill turn and straightaway, you can see on the right the unpaved entrance to a road marked as SP92 leading in to a deep valley. Monte Balchino was inhabited from the 19th to the 5th century BC. It was most probably a fortified place (phrourion) for control of the territory, since it is on the straight road that led  the mighty Gela inland. It was most certainly surrounded by an imposing wall that now appear almost everywhere are at a height of about 2 or 3 rows, and can be dated to around the 7th century BC.

There are few ruins in all the area like a square shape tower in the west side.

The houses had square rooms with dirt floors. On the slopes north and south of the mountain, cemetaries have been detected with simple pit or tombs hewn into the rocks. This site was destroyed in the mid 5th centruy BC.

A lot of pottery was found and it is now on display at the Museo Archeological in Syracuse. 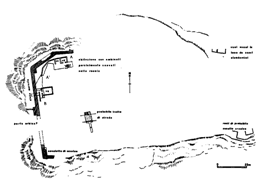 Sant’Ippolito is located north-east of Caltagirone on the road that is called “delle sfere” which leads to the highway towards Catania. The plateau, 400m above sea level, is almost inaccessible. The hill itself follows the fortunes of the neighboring sites, having traces of pre-historic life from the 7th century BC. On the lower eastern part a Neolithic village was discovered (5000 BC) with huts, remains of hearths, pottery fragments in the style of Stentinello (characterized by simple geometric designs and impressions) or inscriptions and  remnants of stone work with axes and arrowheads. 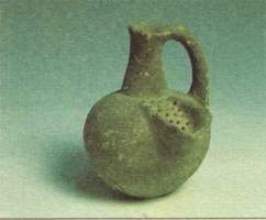 The part above the plain was instead occupied by a later village, from the age of Rame, destined to enter history thanks to their original ceramic work (photo) with painted dark colors and yellowish-red on the bottom, and decorative patterns consisting of bands of lines, vertical, horizontal and diagonal. This style (facies), from the 3rd century BC, came to be referred to as the style from Sant’Ippolito.

There were findings of oval shaped flasks with a loop handle (derivation: Cyprus), hemispherical vases with cylindrical spouts (derivation: Crete), and fruit bowls with round feet. Most of what has been recovered is in the Museo Archeological in Syracuse and in the local Ceramica Museum.

map
Siamo a Caltagirone cittadina famosa nel mondo da oltre mille anni, per la sua bellissima produzione di ceramica. Interessantissimo museo che illustra attraverso la raccolta di manufatti provenienti...
map
The Ganzaria mountain is a hill located above the village of San Michele di Ganzaria about 800 meters above sea level, facing part of the southern most part of Mount Erei. It seems that its name...
map
Mongialino valley / Piano Casazze Immersed in the fields of wheat on the plain of Catania is a valley, silent and almost surreal. In the valley, one arrives after having crossed many ports of...
This site uses cookies. By continuing to browse the site, you are agreeing to our use of cookies.
Ok Find out more