A huge cave with an enormous emotional impact. It was the seat of now extinct animals (dwarf elephants, hyena, deer, wild boar, bear, donkey) and was inhabited by the prehistoric Sicilians more than 10,000 years ago. 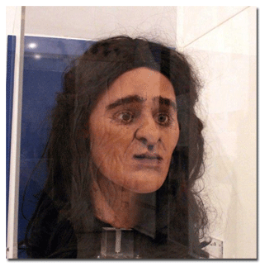 Inside, on the right side, human skulls were found, perfectly preserved, including that of Thea, a woman of about 30 years and 165 cm tall (photo). Now one finds these in the museum of paleontology and geology, the “Gemmellaro” of Palermo.

Together with the other deceased, the beautiful Troglodyte was buried in a shallow grave, in the supine position, surrounded by animal bones, pebbles and ornaments  from necklaces made from deer teeth. All of the items recovered were covered by a thin layer of earth and on top of that was spread ocher, (a natural dye) that formed a fine covering.

The cave also yielded to the museums many tools made of flint, that are usually very small (microlithic) and in quartz with grander dimensions. On the outside of the cave was a basin from a lake that the paleontologists have suggested it was full of Sicilian Hyppos from 200,000 years earlier!