A charming canyon
All the places

They are formed by the meeting of the Pollina river with the limestone rocks of this part of Sicily.

The mountains crossed by the Pollina river have been carved over millions of years creating an extraordinary canyon: the Gole di Tiberio.

The gorges, 10 km away from the mouth, are located  between the municipalities of San Mauro Castelverde and Castelbuono.

In local culture it is said that in the district there was a Roman villa dedicated to the Roman emperor Tiberius along a "grain road" that connected the Tyrrhenian Sea with the center of Sicily. 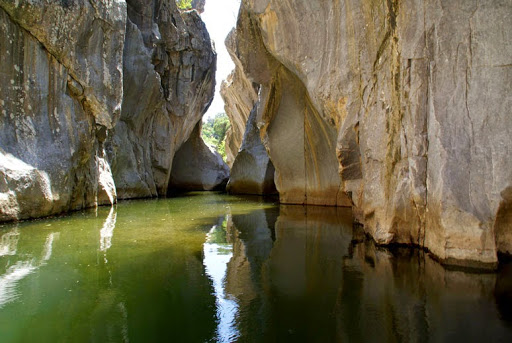 Waterfalls, ponds and overhanging walls rich in endemic plant and animal species were born from their marriage.

The uncontaminated flora is splendid.

At the edges of the river there are oleanders, willows, poplars, tamarisks, rushes, reeds and numerous herbaceous species.

The gorges are about 70 meters high and almost 400 long, with the typical rock vegetation leaning against its walls.

The initial part is dotted with caves where different species of birds nest. Here the river bed is passable on foot. The central part, 250 meters long and 8 meters deep even in summer, is the most fascinating and suggestive one which can only be traveled by rubber boat conducted by expert local guides. Its high walls are smooth and tortuous.

At the narrowest point of the gorge an incredible and huge boulder embedded on the high walls connects the two sides. This shady point of the river, when hit by the sun's rays, lights up with an amazing play of lights.

The reflected light of the water on the walls seems to dance in a fantastic and changing way, prompted by the ripples of the river.

Mysterious helical drawings on the walls testify to fossil remains of gastropods dated 120 million, belonging to the Nerinea genus, a distant progenitor of the snails.

The final stretch of the gorges opens onto a delightful natural swimming pool.