by Giovanni Vallone, the motorwriter of Sicily 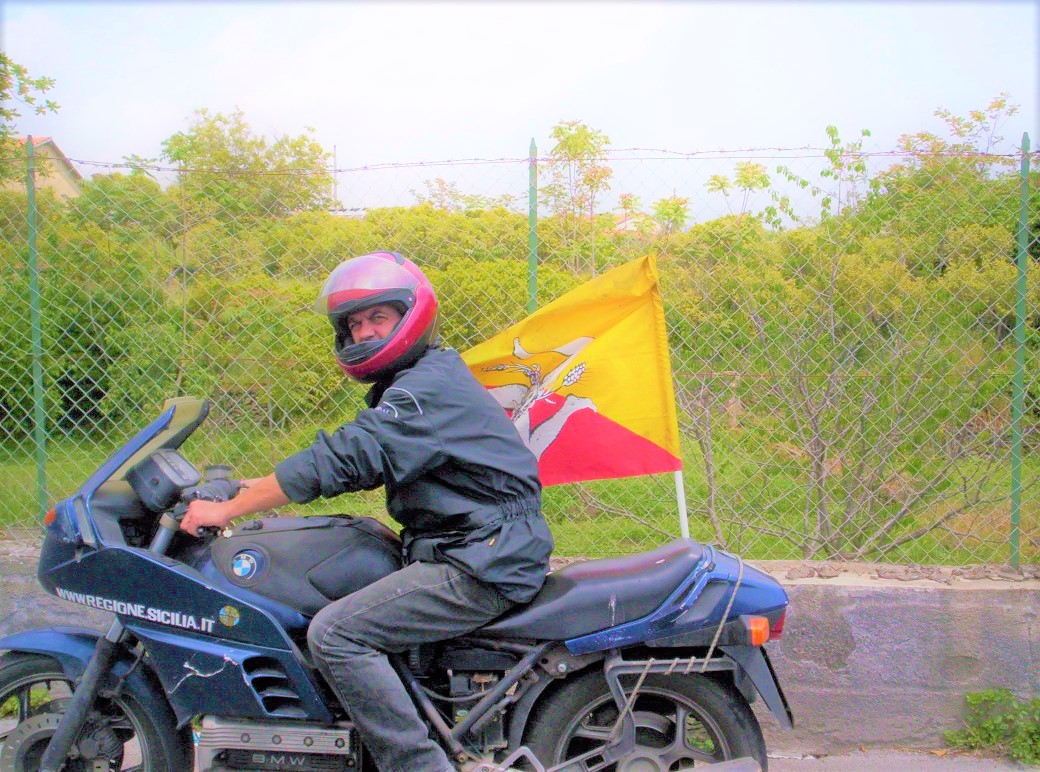 Welcome to my land, welcome to Sicily.

The island is well known for it's hospitality, for the sea and the incredible artistic, archaeological and landscape heritage, which has made it one of the regions with the highest number of Unesco pearls in the world.

For over twenty years i've rode around my land, while filming it, photographing it, exploring it and this tour doesn't seem to be enough to be achieved in the space of one lifetime.

When I arrive in a place, especially when in the inland, at lunch time I lie down on the ground with a piece of cheese, some of our local olive's, bread and a bottle of water. I conclude with an orange, almost everlasting throughout the year.

The colors of Sicily 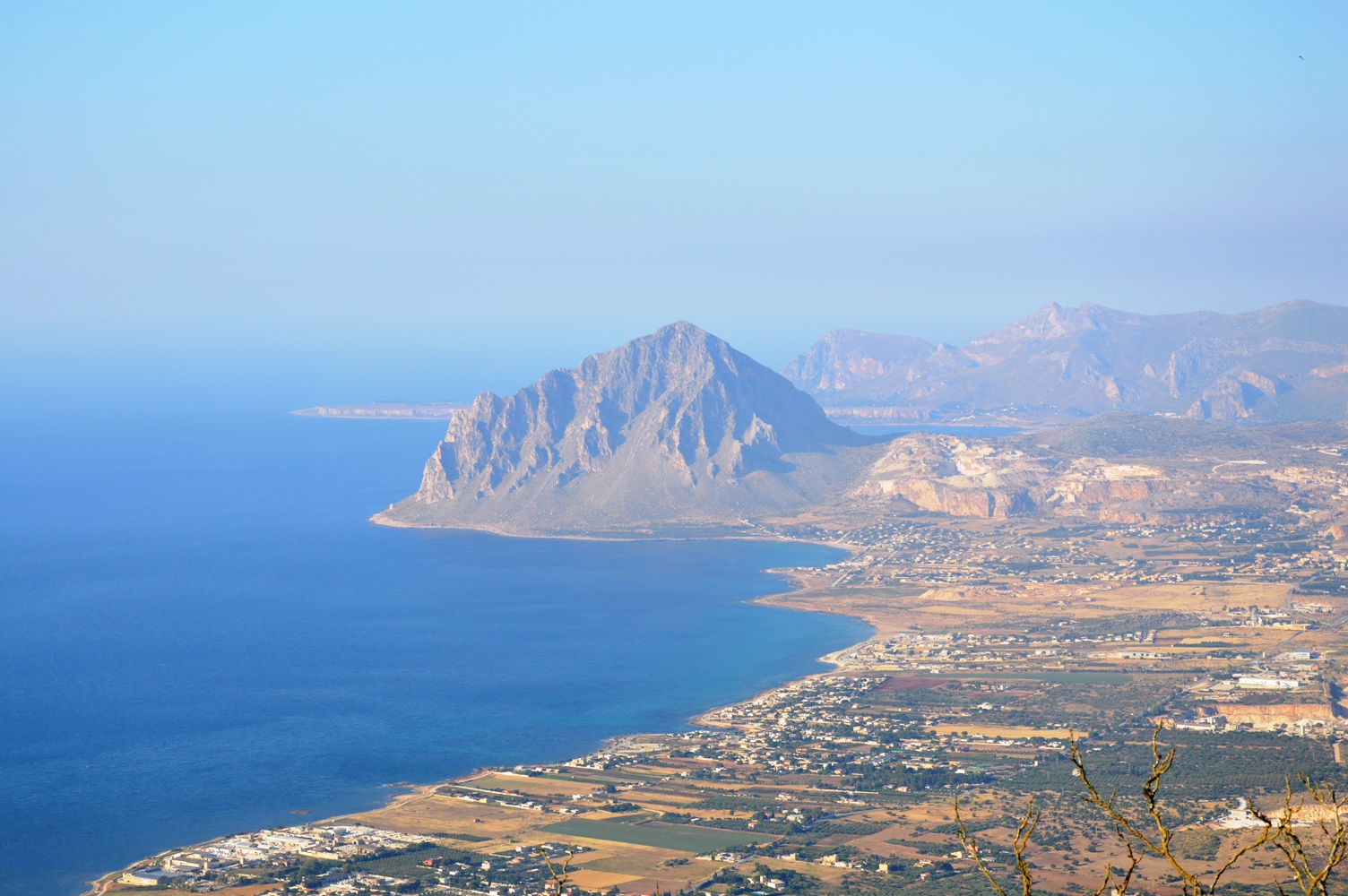 Sicily is well known for the limpidity of its colors and the warmth of its sun.

A wonderful climate, makes the island one of the most popular destinations for travelers from around the world.

Sky and sea have shades that are almost primordial, without a inch of pollution (especially the sky).

The sun is red like the oranges of this land.

If you fail to see why you feel attracted to this land it's because it is not visible, but perceptible.

It is the so-called “who knows what” that charms you.

The  "Atmosphere" the uniqueness of this island.

Sicily is really a strange place, full of contradictions, so uneven in all its components, that eventually it results in a perfect balance.

A kaleidoscope of elements, the perfect chaos, in other words: the perfect harmonious order.

Among the particularity's the most evident are the stones. 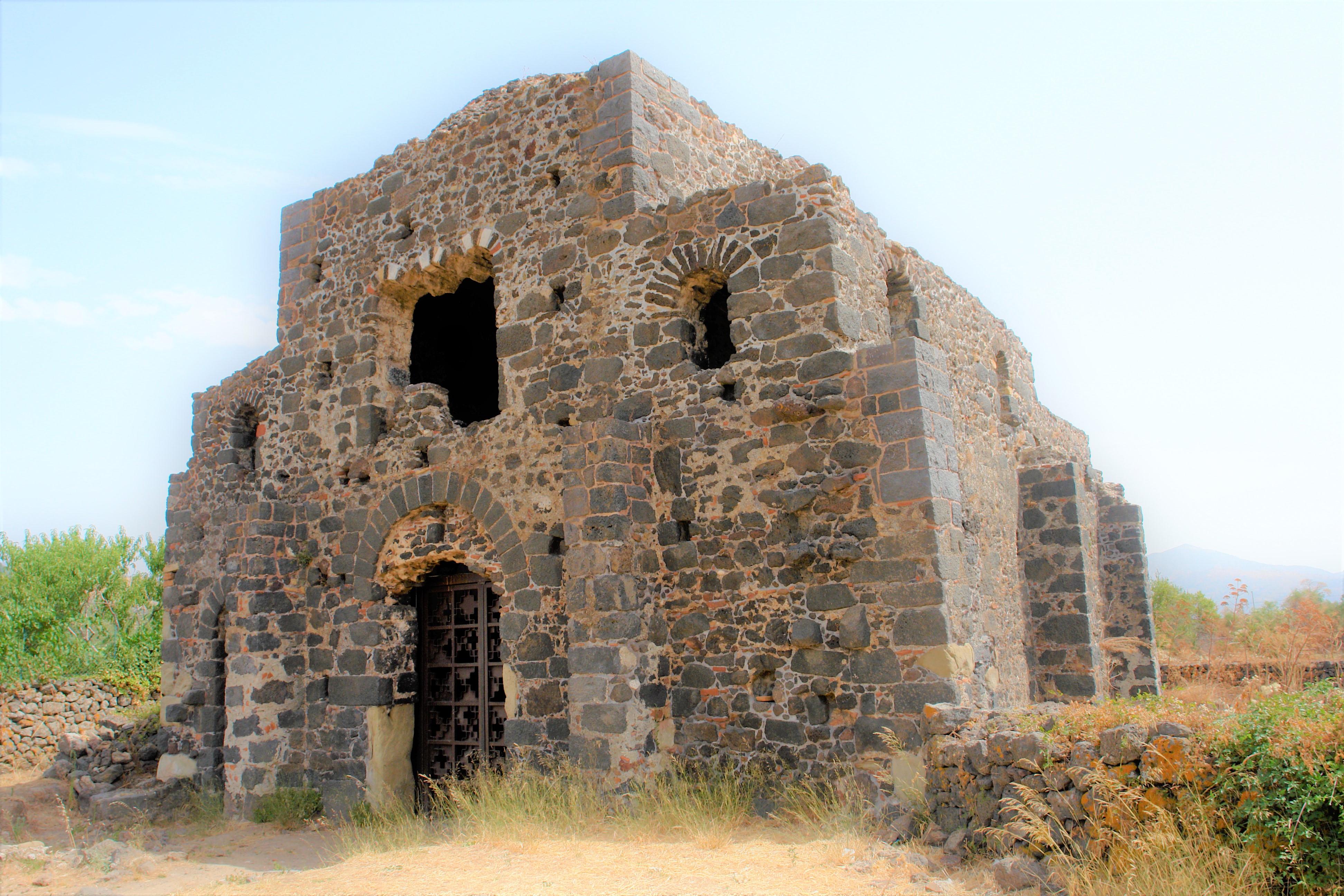 The black Sicily In the Catania area, we are dominated by the giant masses from Etna, it's black like coal or rather like the lava that has flown down hundreds of times (and still does), from the mouth of its summit craters at 3,300 meters. The ancient houses of Catania were all built in lava stones. Streets, churches, wells, fountains ... all in lava stone. 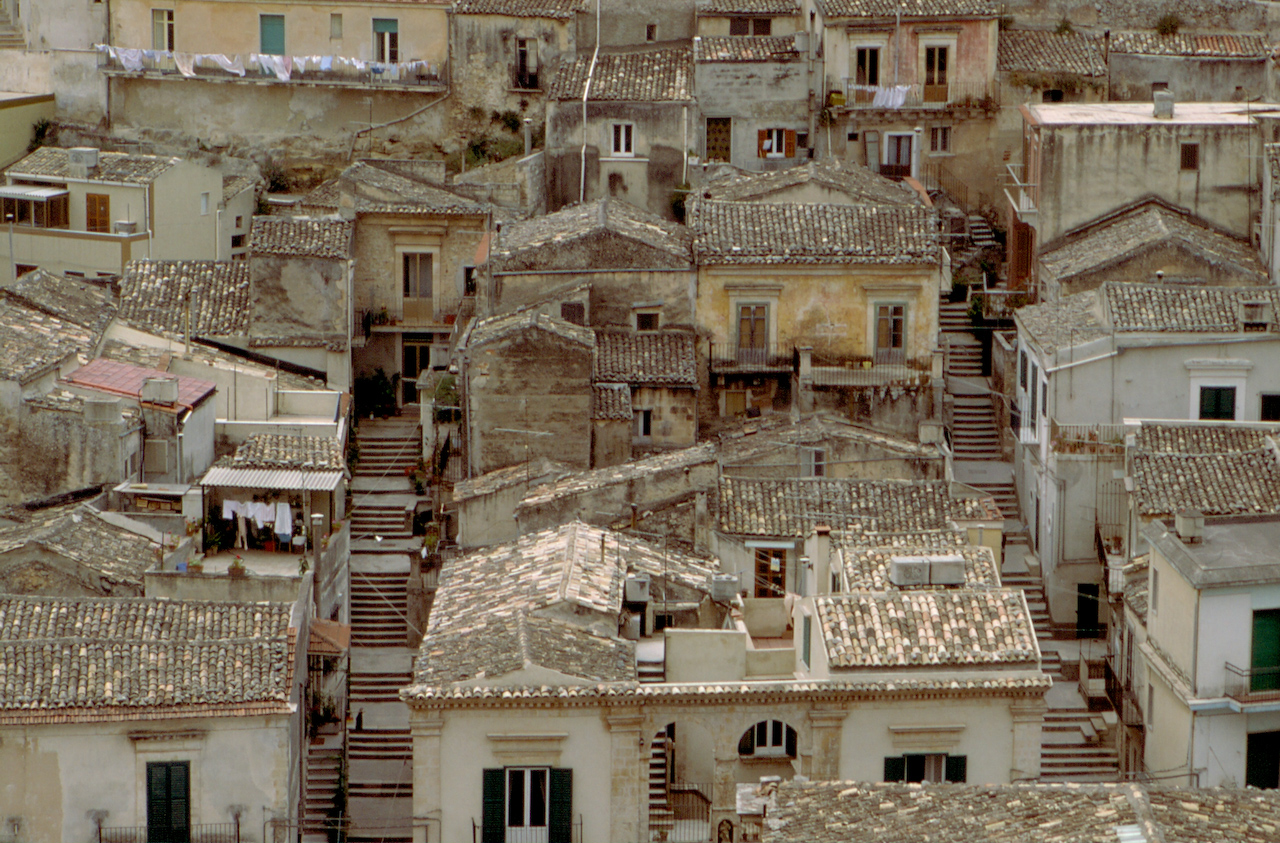 The white Sicily The sea facing towards Africa, especially in fronte of Ragusa and Agrigento, is called the African sea. And in his area, towards the south, Sicily really recalls more of Africa than of  Europe. All is white; even the palm trees, so characteristic throughout the island, that are even in greater number. Unforgettable are the white stone walls that surround the agricultural properties. Unforgettable are the carob trees, olive trees and the gentle dryness, not that annoying, that so much warmth gives to this white limestone, the stone of the African Sicily.

Sicily in color The remainder of the island, the northern part, the part assailed by the mountain ranges that plunge to the Italian sea (facing towards Italy), is the realm of the third stone of  Sicily: the sandstone, which with its colors, at times close to yellow, sometimes close to red, the others towards brown, complete the naif of Trinacria. 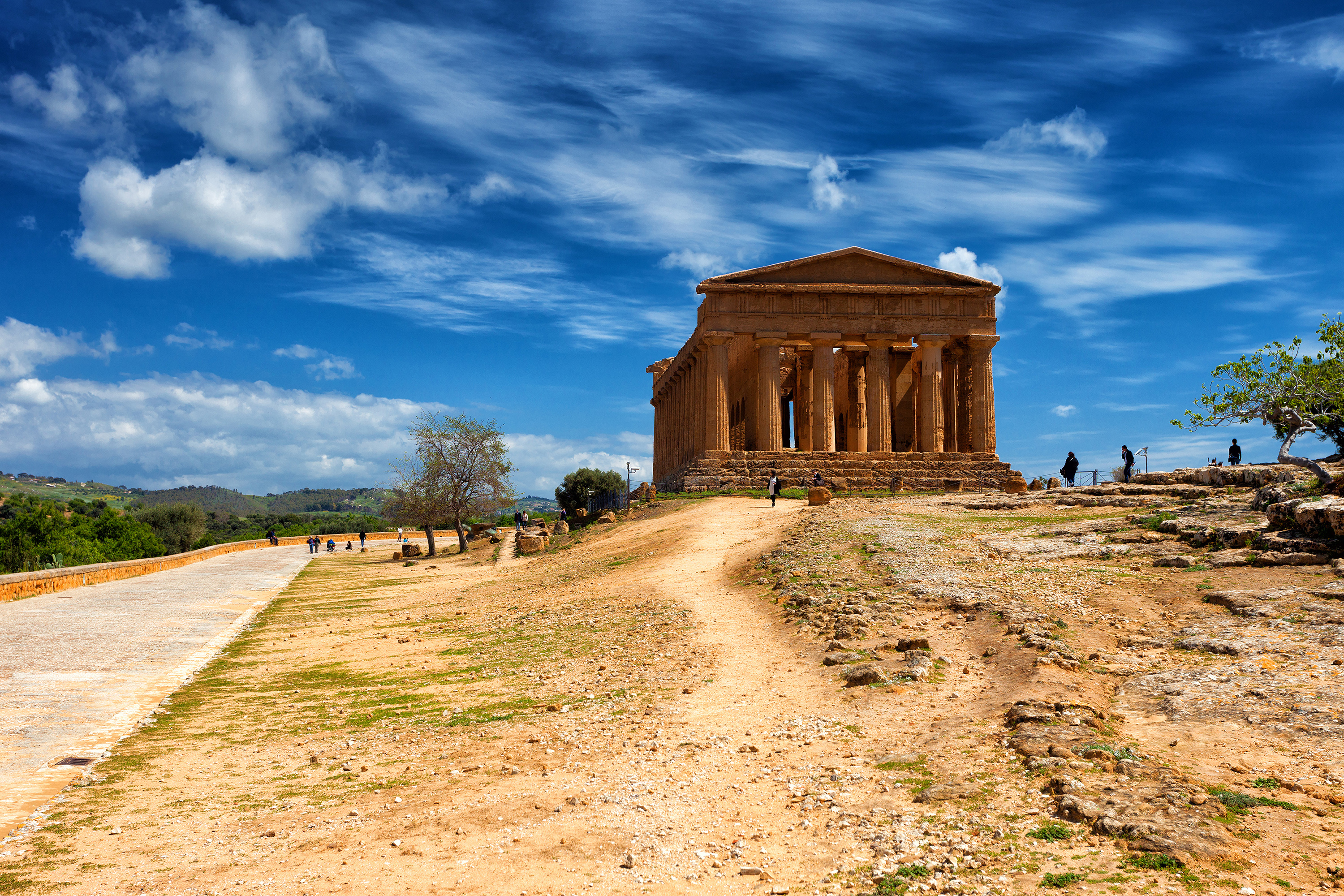 Endless horizons of grain without seeing a town worthy of the name.

A cottage scattered here and there and a number of bumps that you can chase at breakneck speed with your eye, almost every kingdom of past civilizations on the plateau top. How many potshards of every past age will be found up there !!!

Sicily was the granary of ancient Rome.

Even today its inland is all cultivated with wheat.

The island is like a roller coaster, with an endless series of bumps that you can chase at breakneck speed with your eye .

The wheat wraps around the landscape.

In Spring this verdant agricultural landscape is embellished by thousands of colors of it's flowers. 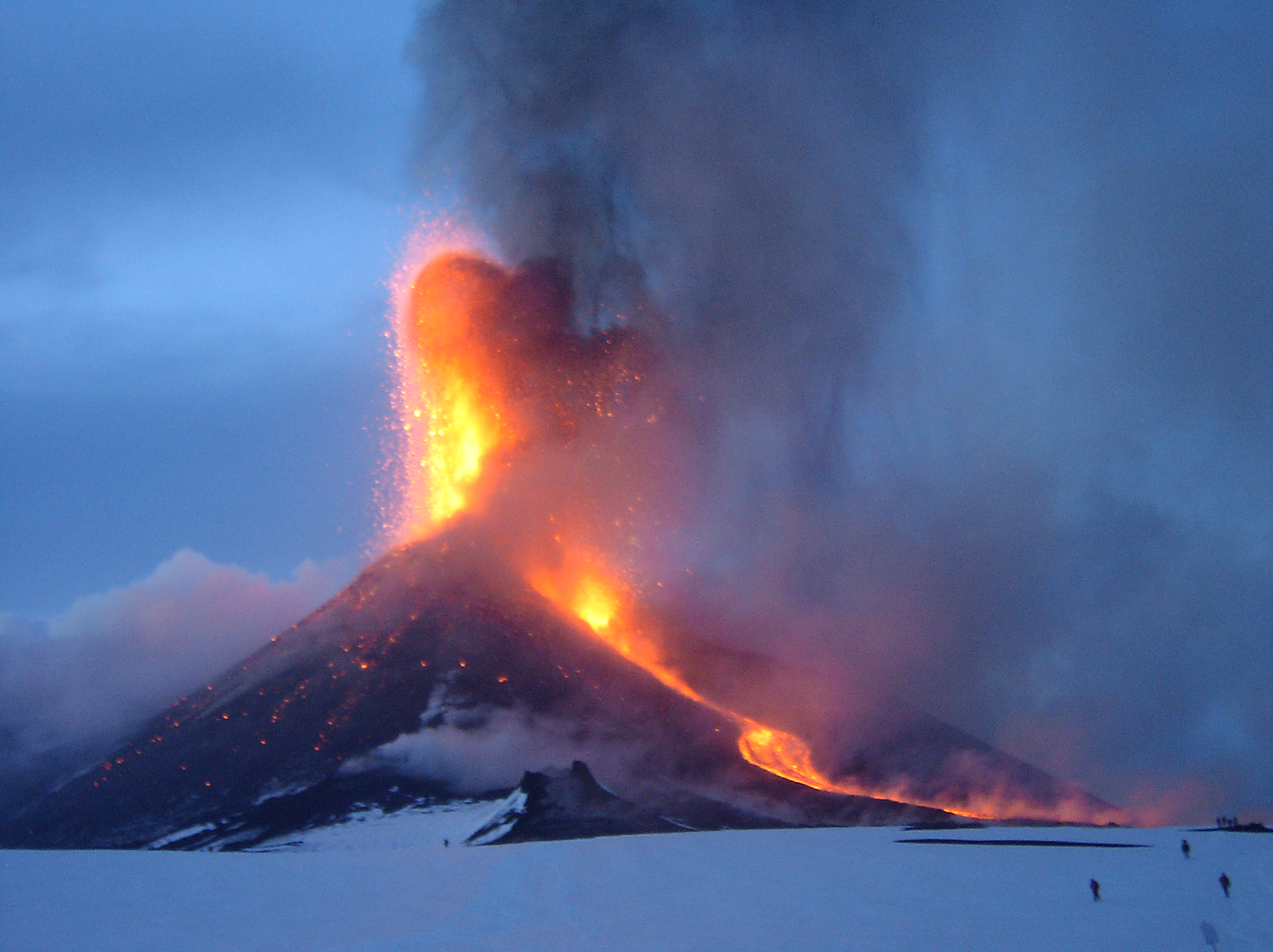 Etna is a dream. A dream of fire, forests and landscapes.

In the eastern part of the island, a beast of 3300 meters imposingly stands: it is the highest volcano in Europe, the mountain twice, the “Mongibello” (mons "mount" in Latin and gebe "mountain" in Arabic).

But for all, more sympathetically: Etna, which name derives from the Phoenician “aito”, burn.

For the people of Catania is "a muntagna" (the mountain).

So there for Etna is a women, female (the Etna mountain) and not male as it should rightly be (the Etna volcano).

The volcano is a fireing flame devil, that for hundreds of years, passionates and amazes magneticly millions of travelers: from Goethe, to a Japanese with his camera just a few days ago.

She's not dangerous, for the simple fact that the houses are quite distant from her (the highest town is about 1000 meters and the lava, if it really would not want to stop, would take several months to reach it).

She often puffs ash like a flying snake that gets up in the sky and falls on all the towns under the volcano, forcing the women to brush clean the streets, courtyards and more.

Up to 2000 meters high the Mount Etna is a series of vents, lava flows of the past, caves, craters, homes destroyed by lava, animals, colors ...

Above 2000 meters it is just desert of lava.

I, who have had the great privilege of writing the guidance of this volcano, say that Etna is one of the greatest masterpieces of nature on Earth.

It's a huge seated Buddha in eastern Sicily. A snow-covered Buddha during the winter, for the delight of skiers looking down to the sea, as if it was the arriving point.

A sanctuary of well-being.

But also a sanctuary of good food with Silvana's “etnee” recipes. 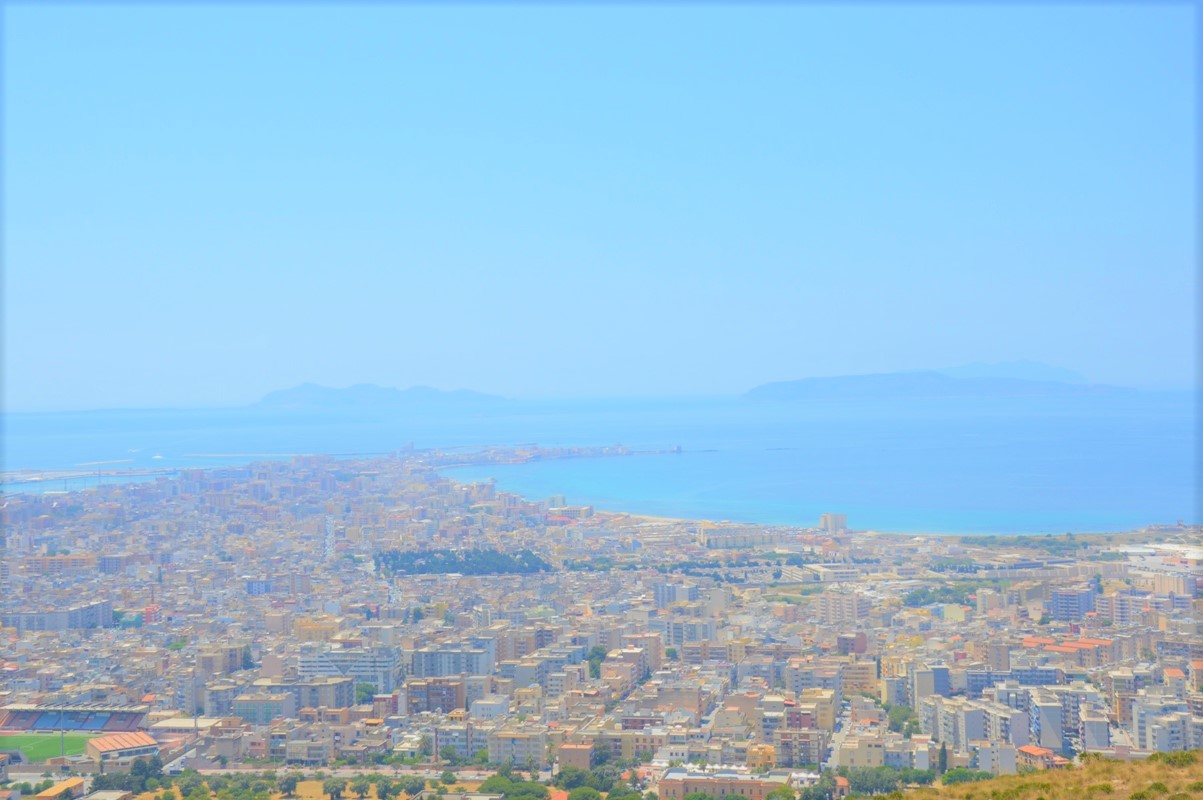 From Capo Peloro towards Capo Passero (coasts of Messina, Catania, Siracusa) In the coastal portion that goes from Messina towards Giarre (Catania province) the coast is sandy with the Peloritani mountains and Etna overlooking the coast. From Riposto towards Catania there are lava rock cliffs, formed from ancient eruptions of Etna. From south Catania towards Portopalo the sandy coastline resumes.

From Cape Passero towards Cape Boeo (coasts of Syracuse, Agrigento, Trapani) This coastal stretch is covered buy plains, with no mountains to cover it. So, therefore, it's a more arid tract, more African (mainly in the south).

More towards the center the cool air does not increase instead it decreases. Like in winter the cold temperatures not to increase. It's a question of choices. Particularly striking is the so-called Scala dei Turchi, a portion of fine white sand nearby Agrigento.

From Capo Boeo towards Capo Peloro (coast Trapani, Palermo, Messina) An extraordinary sequence of mountains (Madonie, Nebrodi and Peloritani) plunge into the sea, that characterize this stretch of coast (especially from Messina towards Palermo), predominantly sandy. Curious and unique is the  feeling of being in the woods, when, just before you where just by the sea, by the stroke of the  accelerator.

The inland of the island is the kingdom of Apollo, the shepherd of the Sun God's cows, according to Greek mythology, and who had his own kingdom in the mountains of central Sicily: Mounts Erei and Sicani.

This inland is almost entirely cultivated with wheat and has a typical troubled morphology, with mounds that  do not have the dignity of real mountains and are implicated as "pizzo", "cozzi", "Timponi". The wheat yield in this part of Sicily, still remains authentic in the landscapes and in it's people's habits, very green from January to early June (immature grain), very yellow until late August (ripe wheat) and brown (plowed land) in remaining months. 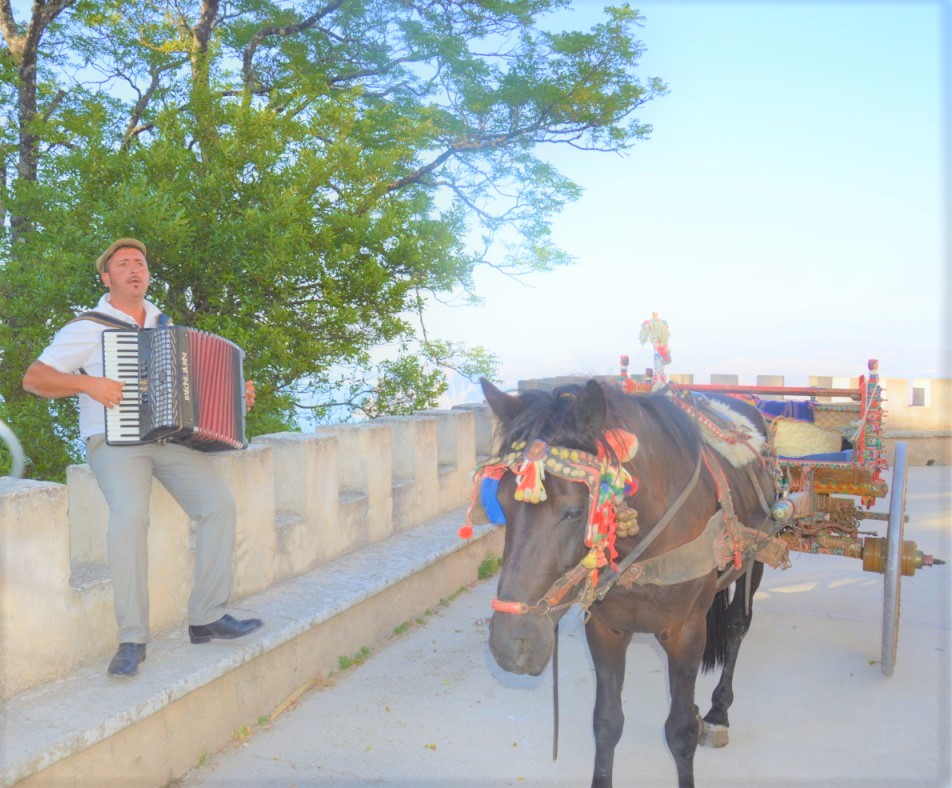 The Sicilians are a hospitable people.

Already said, but let's repeat it.

A Sicilian always responds to a information

The true Sicilian type is a bit of a panderer but absolutely consistent with their given word and honor, as they call it.

From this point of view people have in there veins an infinity of secular domination that have characterized the island.

They are a bit sons of Zeus for the hospitality and generosity.

They are a bit Arabs for the pandering and indolence.

They are a bit Normans for a certain aristocratic style, from “il Gattopardo” that characterizes different families of the island, land of blue blood.

They are very Mediterranean, for the passion and hot blood and also for a certain craftiness, often exaggerated.

A Sicilian, in fact, never enters the front door, but enters from the open one.

The habits of the Sicilians 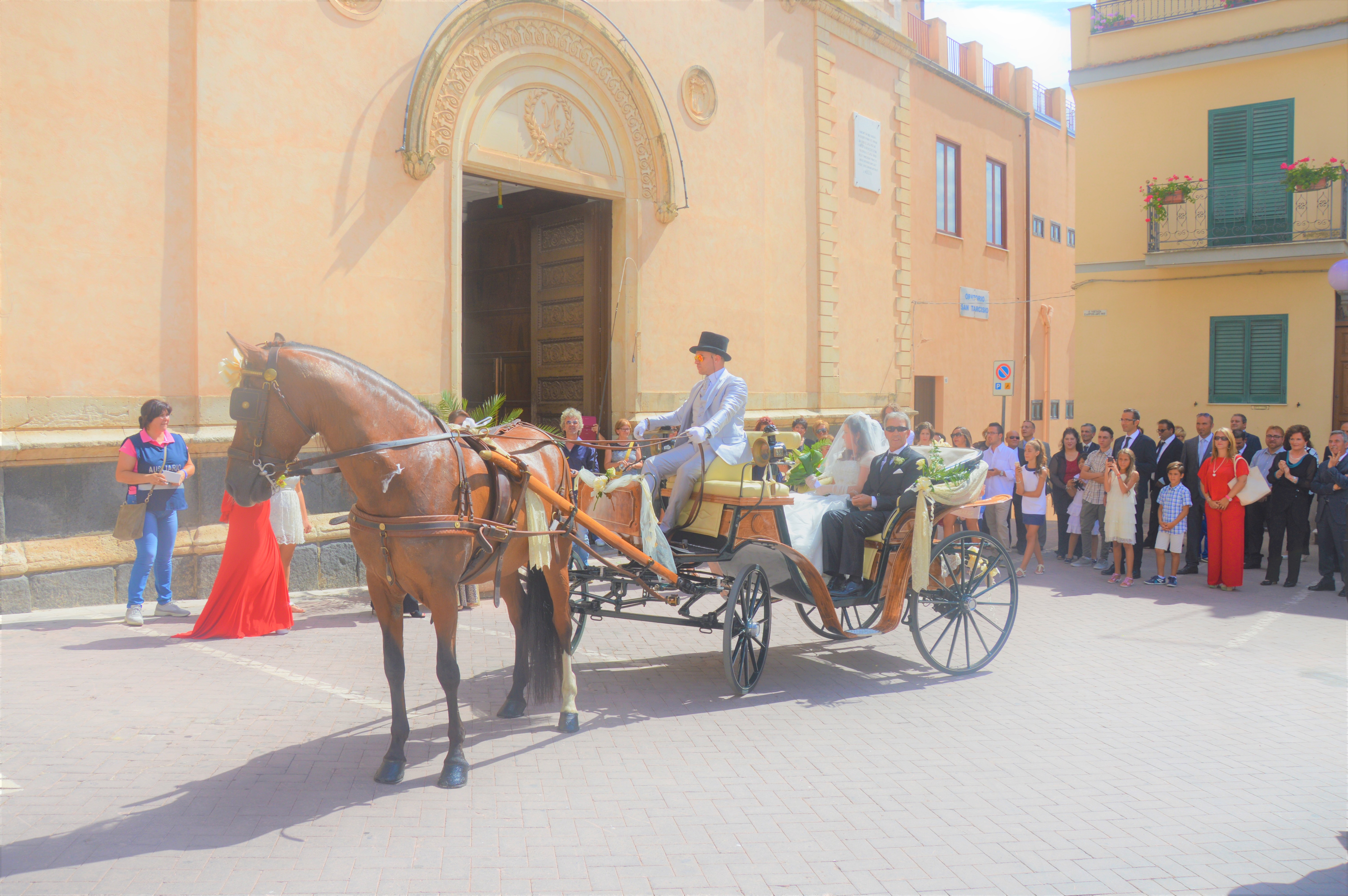 I'll now describe, the main habits of my people:

2 We are not heavy drinkers

3 In the morning we have a coffee, especially at the bar where you have breakfast with local bakery products (filled with cream, jam, fruit, citrus, chocolate or empty ...). In the morning the bars are really very frequented.

4 We have no particular afternoon eating habits. If you are a youngster, a typical break would and still be, a sandwich with Nutella.

5 Some elderly Sicilians from the inland,(who I have often interviewed for domestic issuer account Rai), have never seen the sea !!! That for accuracy of information, is not that far (maximum 80 km).

7 Especially, but not exclusively, in the summer, there is a religious festival after an other. Even within small communities there may be several feasts and festivals. An exaggerated thing. But beautiful, joyful and unique .

9 Football is the favorite game of the islanders. Then follows tennis, and activities related to the sea, of course.

10 Catania and Palermo can not bear each other so much.

12 The mother's and the sister's are untouchable. The Sicilians are a people of mama's boy and remain under the mother's skirt even after married.

13 You drive on the left. At eighteen you take your driver's license.

14 Sicilians really do eat a lot of cakes. Extraordinary, and proverbial is the island's production in this field.

17 So I'm wondering: is it worse to hank the horn madly even when you shouldn't or being in a inhospitable place? (to follow) 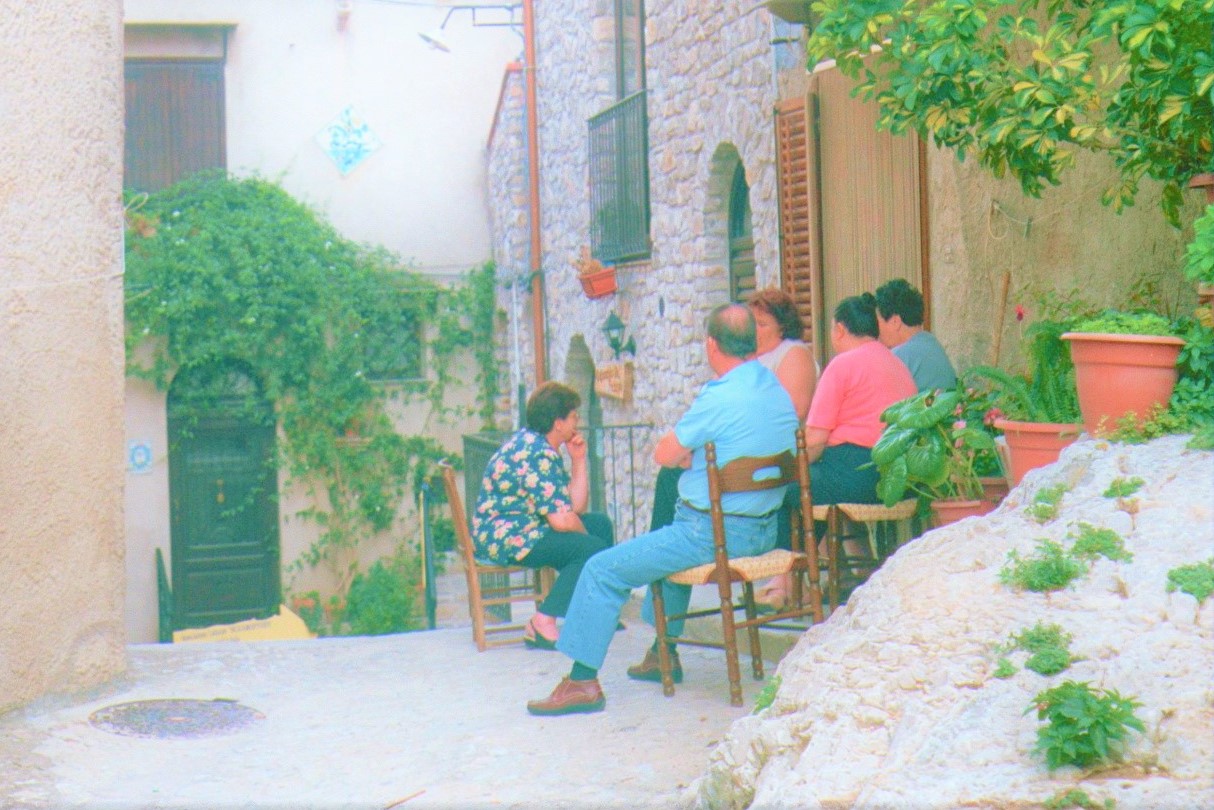 One of the most picturesque customs of the people of Trinacria (the ancient name of the island), especially in villages or in the poorer neighborhoods of the big cities, is to put tables and chairs outside your door, in the streets, to chat, to read, to embroider, to think, to observe ...

The Food of Sicily 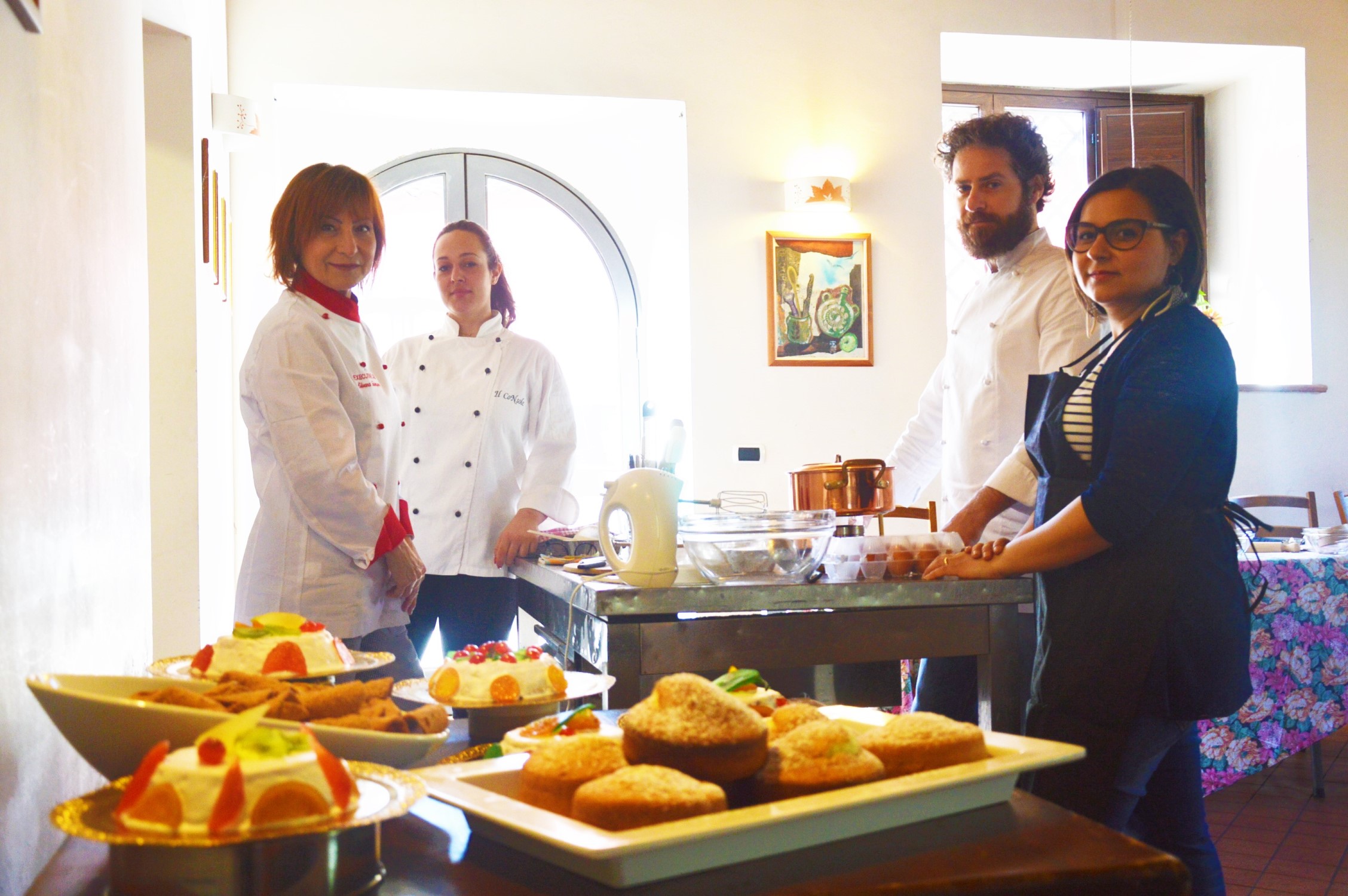 Silvana, the chef of the association, invites you to eat in Sicily.

The Ancestors Tour: promo
Etna tour: The fire of Etna and the cuisine of Silvana!