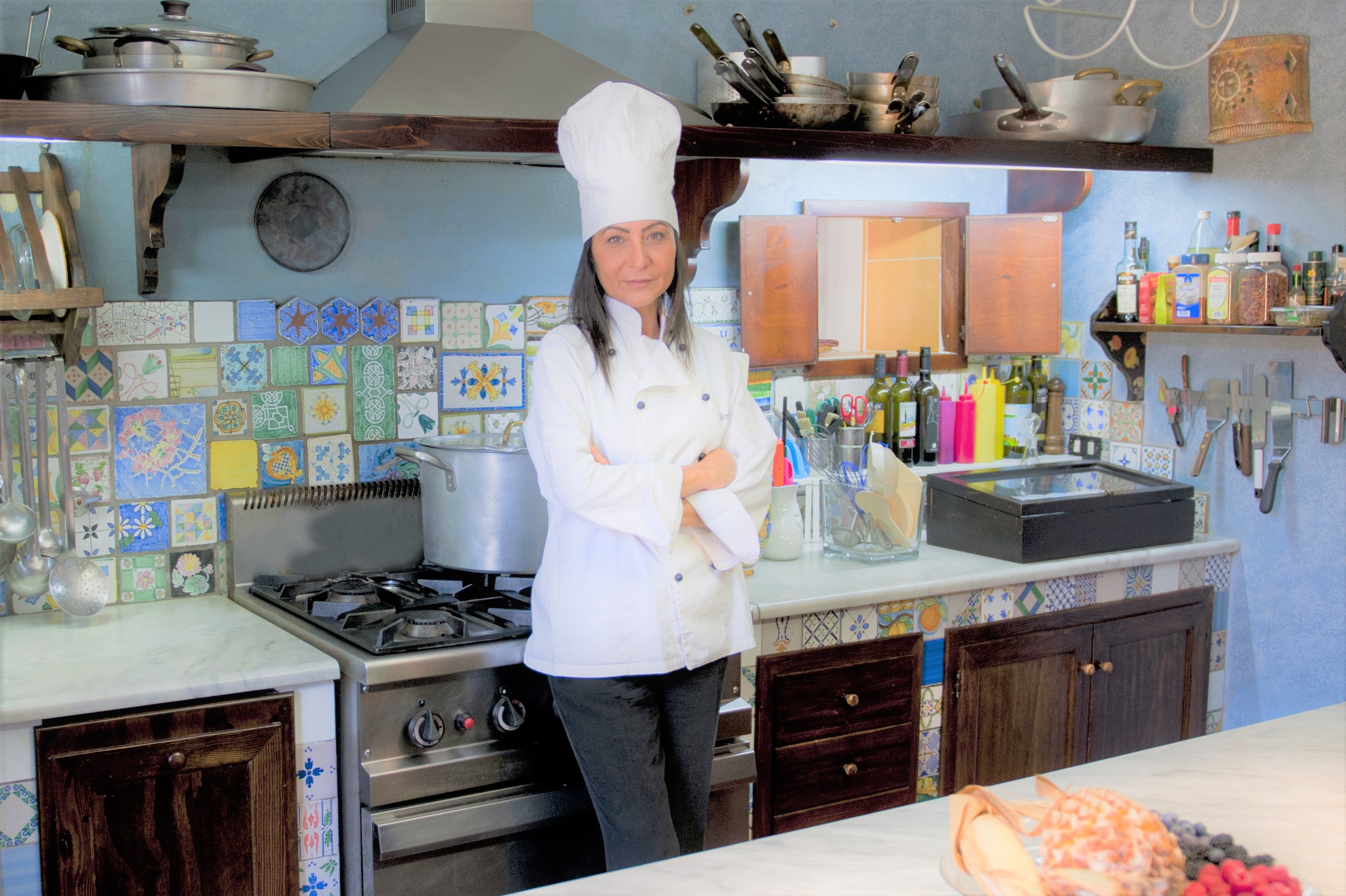 This proverb, from the Roman Emperors of the Second Century BC, would be sufficient to help us understand how Sicilian cooking has pleased and satisfied palates since ancient times:
“Cook like a Sicilian, eat like a Sicilian”

This land is blessed by the sun and eternally fertile. It produces an abundance of crops that are intensely flavored by the rich earth with a fragrance and taste that is unique and special (citrus fruits, pistachios from Etna, almonds, tomatoes, vegetables, olives….wine!)

But we come right to the point: we want to understand what a Sicilian eats and what a visitor to Sicily should eat. 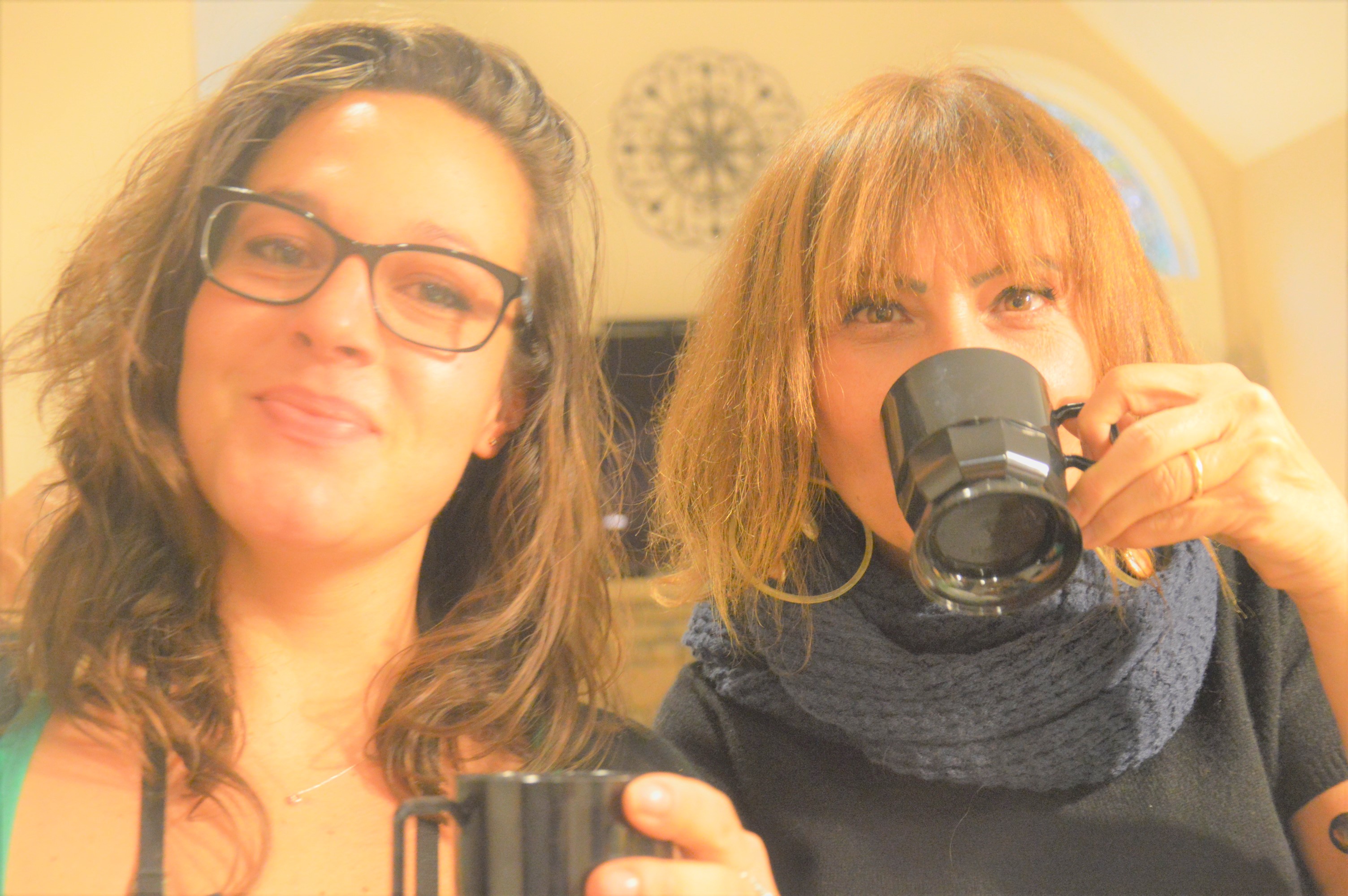 Around 8:00 in the morning, Sicilians head to the bars for breakfast. Surely some remain at home enjoying a good glass of milk and cookies, but we are following the Sicilian who goes to the bar. These places, in the morning, are full of delicious delicacies, all incredibly sweet. The typical international breakfast (eggs, sausage, potatoes…) is found nowhere in Sicily (except in hotels, of course).

In the company of a cappuccino or preferably a reliably satisfying espresso, here at the bar one can find the following delights: international croissants (flaky pastry filled with jam, chocolate, cream, pistachio ...), small fried loaves filled with chocolate or cream, fried dough balls (chocolate or cream filled) turnovers, oven baked dough balls (chocolate cream filled), doughnuts, soft and sweet things (loved by children and by me too!), ricotta ravioli (fragrant fried dough filled with sweet cheese) and a variety of other sinful delectables. 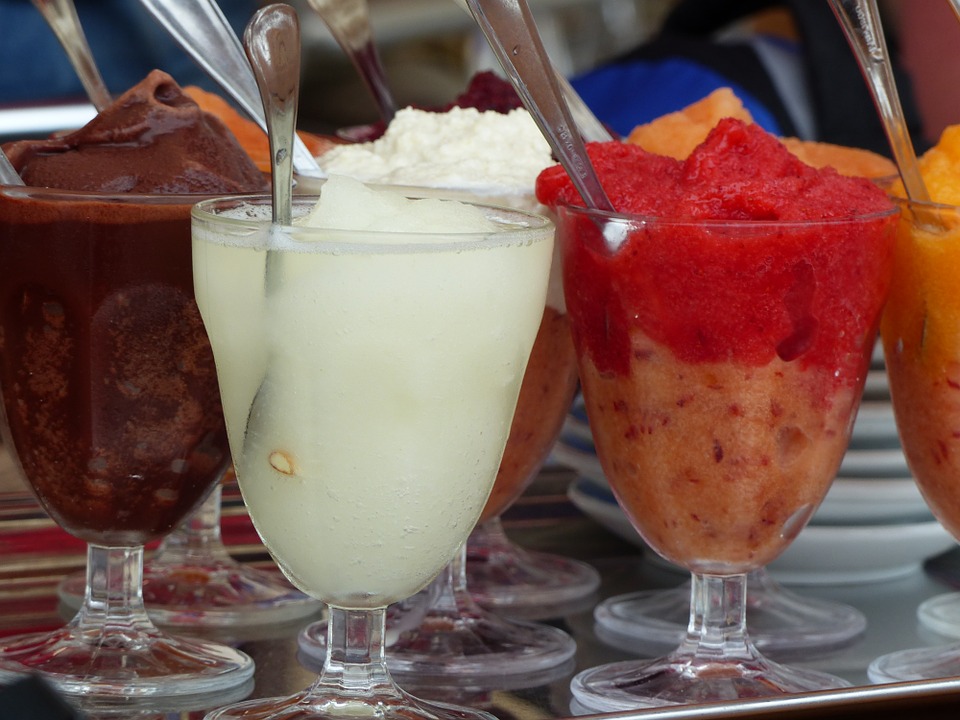 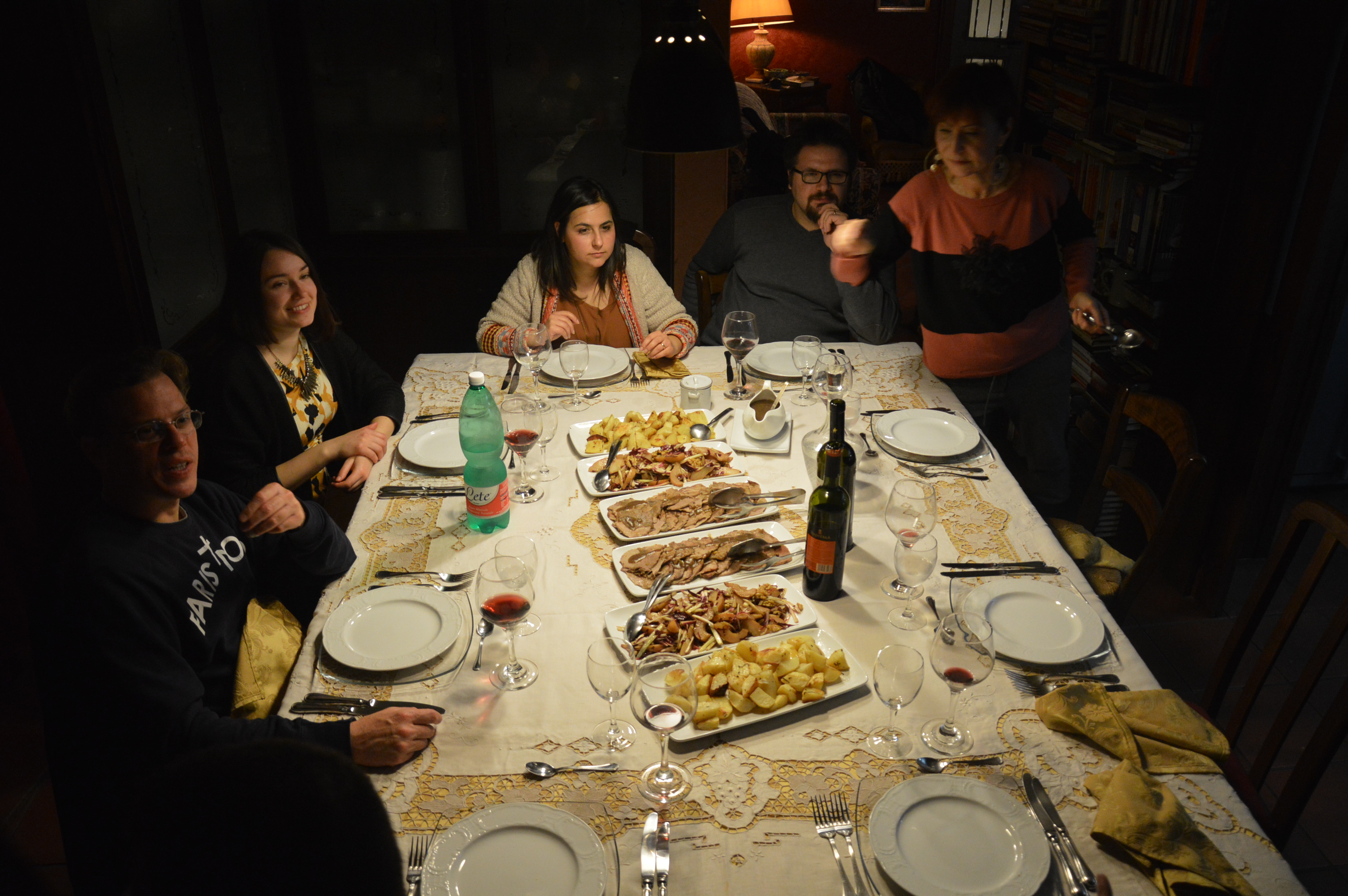 So, you have to understand this: when we are young (until we hit 20 years old and even older) our mothers prepare a complete lunch and dinner for us: antipasto (a more recent addition), first course, second course with side dishes, sweets (from time to time but never absent from feast days) and fruit (inevitably)!
This is how Sicilian children grow up: generally stuffed with food!

But honestly, this is the key to everything: You will be happy if you eat well. Here is a typical Sicilian pranzo (lunch):

For antipasto she would prepare a nice platter of green and black olives, dried tomatoes, eggplant and roasted zucchini, cauliflower, parmesean cheese, (photo: baked eggplant, eggs and tomatoes) and caponata (a mix of diced sweet and sour vegetables including eggplant, celery, onions, and for the Catanese, also peppers). It’s a very good beginning.

Next to the ever present and fabulously fragrant Sicilian bread is a steaming bowl. 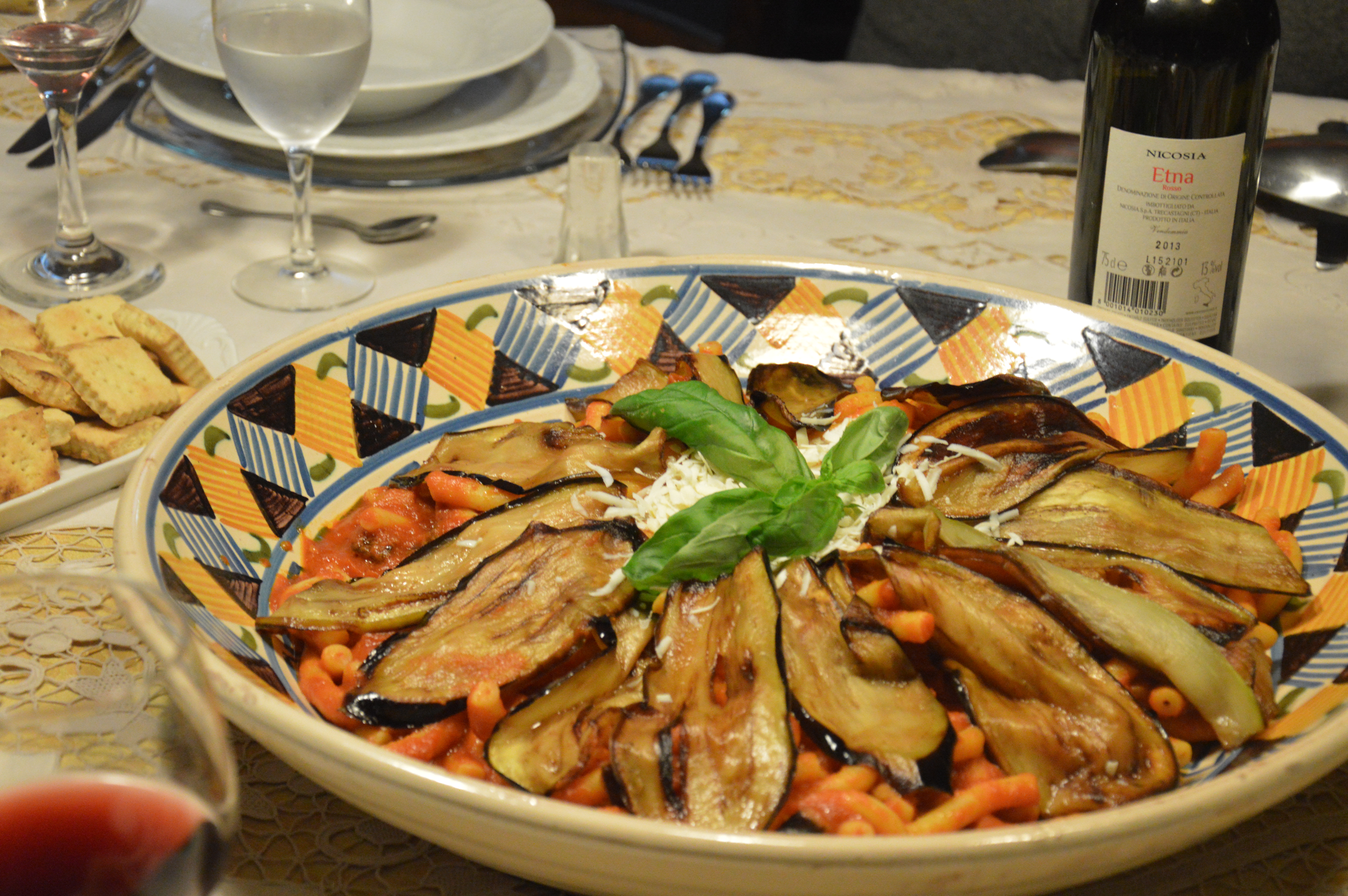 For the first course in Sicily, it is one thing only: pasta. These people are serious pasta lovers and there is even evidence that they invented it (in Trabia, in Palermo)! What will Mother bring to the table?
Pasta with sardines (a typical dish from Palermo, with sardines and fennel), Spaghetti alla Norma (a tipical dish from Catania, with eggplant and ricotta salata cheese) gnocchi di semola (small semolina dumplings) with pistachios from Bronte (with pistachios from Etna), busiate alla trapanese (a typical dish from Trapani, with basel, garlic, tomatoes), cannelloni (with ragu and white sauce), pasta with broccoli (that is with broccoli, pine nuts, black olives….), small ring pasta alla Palermitana (baked pasta with eggs, ragu, eggplant, and peas….)

No – none of this. Today, pasta with dired fava beans!

And now the second course: fish or meat? 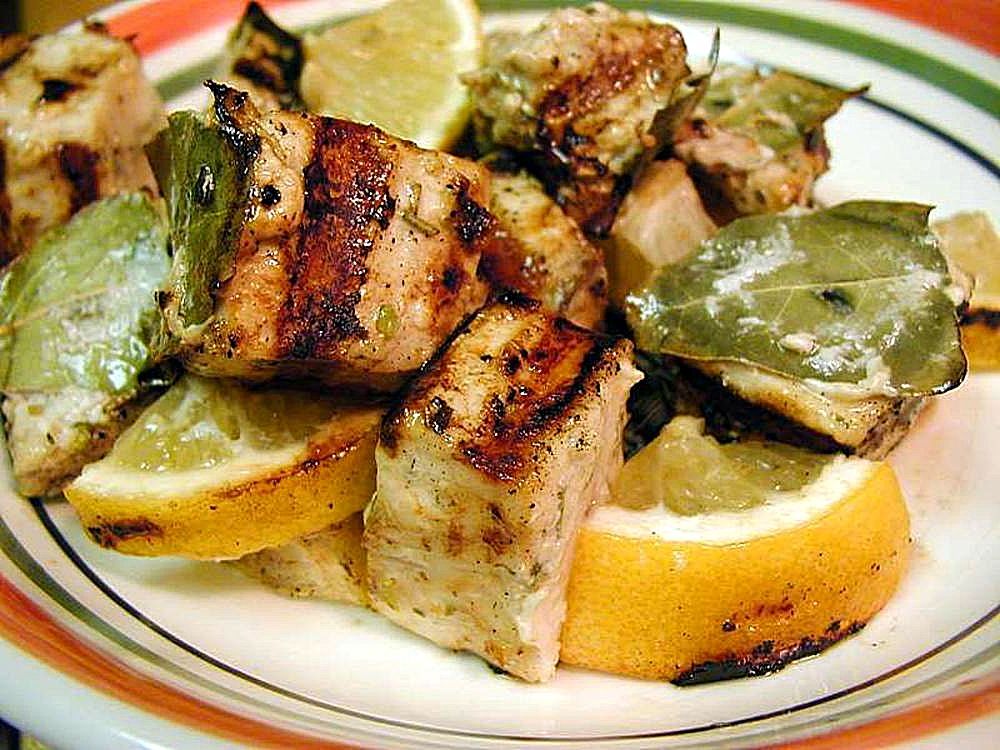 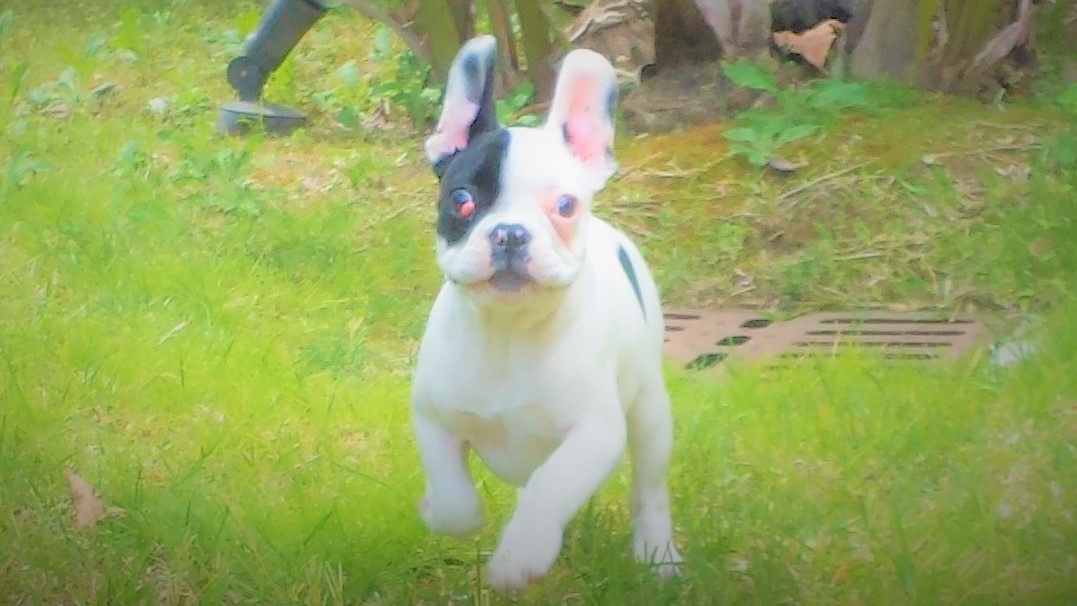 Just a while, please: Pedro is hungry! Come on Pedro your gelee is ready! 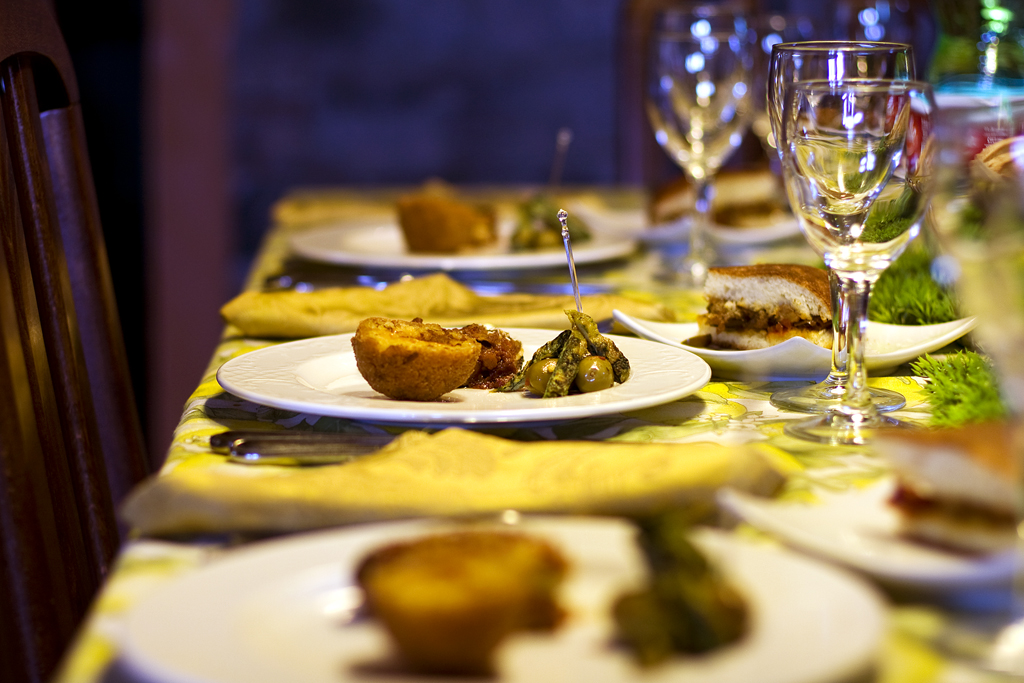 With the second course, you never forget the side dish! French fried potatoes, or a little lighter, a nice Sicilian salad! The salad has no precise composition, but it is so delicious, and is testimony to the Island’s fertile ground and the season.

Add whatever you like, you have many choices including: tomatoes (all types), fennel, lettuce, carrots, radicchio, oranges, limes…

On the subject of tomatoes, an English friend of mine made this comment: "My sons, in London, they don’t touch tomatoes. They hate tomatoes. Here in Sicily they only eat tomatoes!"

Are her sons crazy or are the tomatoes good?
The tomatoes are good, of course!!!

Fruits and vegetables in Sicily have a completely different taste. And everyone knows this is a fact. 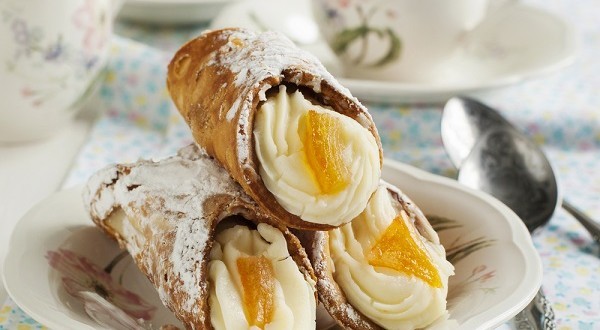 Today is not Sunday but the sweets on the table they are the same. Today is Monday and there is a tray with leftovers from yesterday. Why? Because we throw out nothing (Sicilians act as if war will break out at any moment and the refirgerators are always full to bursting so they are ready.) On the tray we have a small piece of Cassata Siciliana (photo) with a lot of ricotta, frosting to cover and candied fruit on top, a nice big fat cannolo with chocolate and a small cannolo, so small, with ricotta, a little pine nut confection (a type from Messina), a piece of chocolate from Modica, and a couple of pastries (fried with honey).

We are all in agreement, right?!?!

Of this I am certain: one can come to Sicily and not swim in the sea or see a Greek temple or climb Mount Etna. But one cannot risk not eating a sweet!!

Even though the bellies of this Sicilian family are more than satisfied, today they also had two guests from Holland who they had repeatedly invited to eat with them and now these poor people  cannot do enough.  They decide that they cannot end the meal without fruit!  A platter arrives and the unfortunate full ones look like they are dying: oranges and mandarins, prickly pear,  loquats, cherries, peaches, apples and so on and so forth.

But by good luck, at the end there is a nice cup of coffee and a bit of Amaro dell’Etna !

Il couscous ( antipasto, first course and second course all in one shot !) 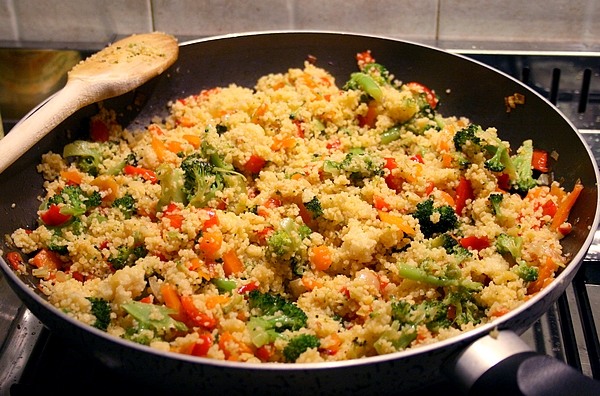 Greetings, I am Giovanni Vallone, Sicilian writer,  and I stole the pen for a minute from Silvana. I grew up with couscous, too. My grandfather worked as Consul in Libyia at the time of the war and my mother brought a piece of Africa back with her when she returned. But not only my mother.

For many Sicilians from the west, couscous is a staple in their diets, as much as pasta and sweets! Either my grandfather was just a heartbreaker or this story that Sicily is close to Africa is really true.  In fact, people often say that Sicily is not south of mainland Italy, but north of Africa.  Sometimes my mother would make an enormous, heavy ceramic dish full of couscous.  It should be a simple dish, like peasant food, but we tried to make it richer. On that plate, the couscous (flavored with saffron), was beautifully arranged around the border and  with it, she alternated piles of chick peas, eggs, potatoes (but if you had an inspired mother, she would also add zucchini, peppers…).  In the middle, the meat (preferably lamb), with a little bit of sauce and a few threads of yellow zucchini.  This ‘monstrous’ plate was accompanied by a type of Aladdin’s lamp full of spicy sauce for those who wanted to pour it on. So spicy. So piccante! How much couscous I have eaten in my life! And how delicious is this version from Trapani!

A Snack break (expected during the day) 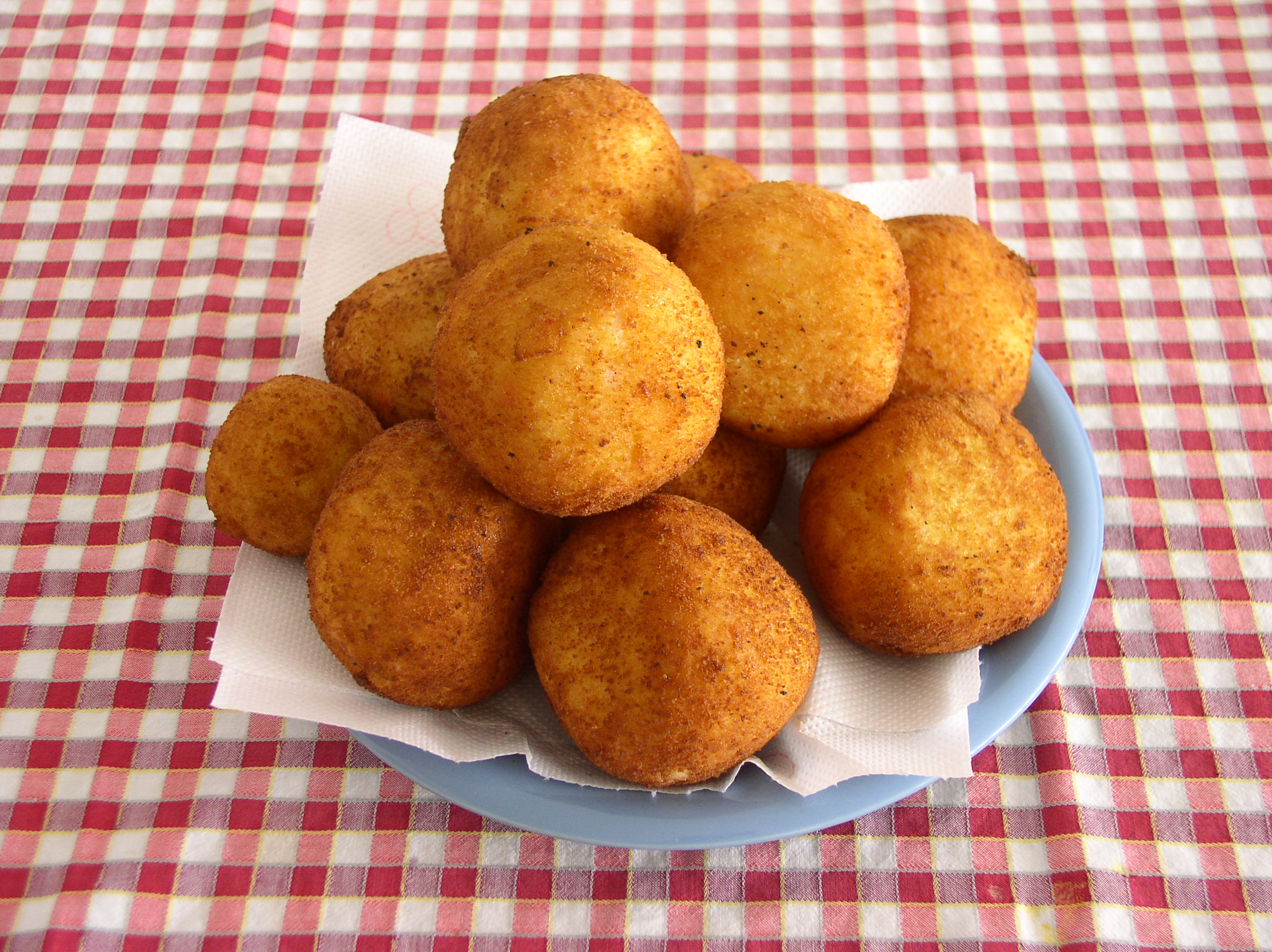 The Sicilians don’t ignore their snack time. For most of the world, this is normal, but for us it’s obligatory!  Children are raised on bread and Nutella in the afternoons, between games and playing in the yard. When they get older, the snacks change. To attract the Sicilians, there are the usual bars, that starting from 10 in the morning, and without pause, churn out mouth-watering savory treats. Ladies and gentlemen, check this out: fried, stuffed rice balls (arancini), small pizzas, sfincioni (Sicilian-style pizza), fried pastry stuffed with a thousand things…

To describe the food of the street, this English phrase is perfect.  And with great friendship, I accompany you to sample some in the warren of alleyways, in small shops, and from vendors with pots and pans all around Sicily.  Palermo has the best markets (Vucciria, Capo, Ballarò) and it is perhaps the Sicilian city that best exemplifies this tradition of street food.

It doesn’t start and end with food, though. It is also important to tell you about the stalls in Catania: here and there throughout the province they sell the typically refreshing and delicious drinks: mandarin lemon, lemon, pineapple fruit… Tasting is believing. 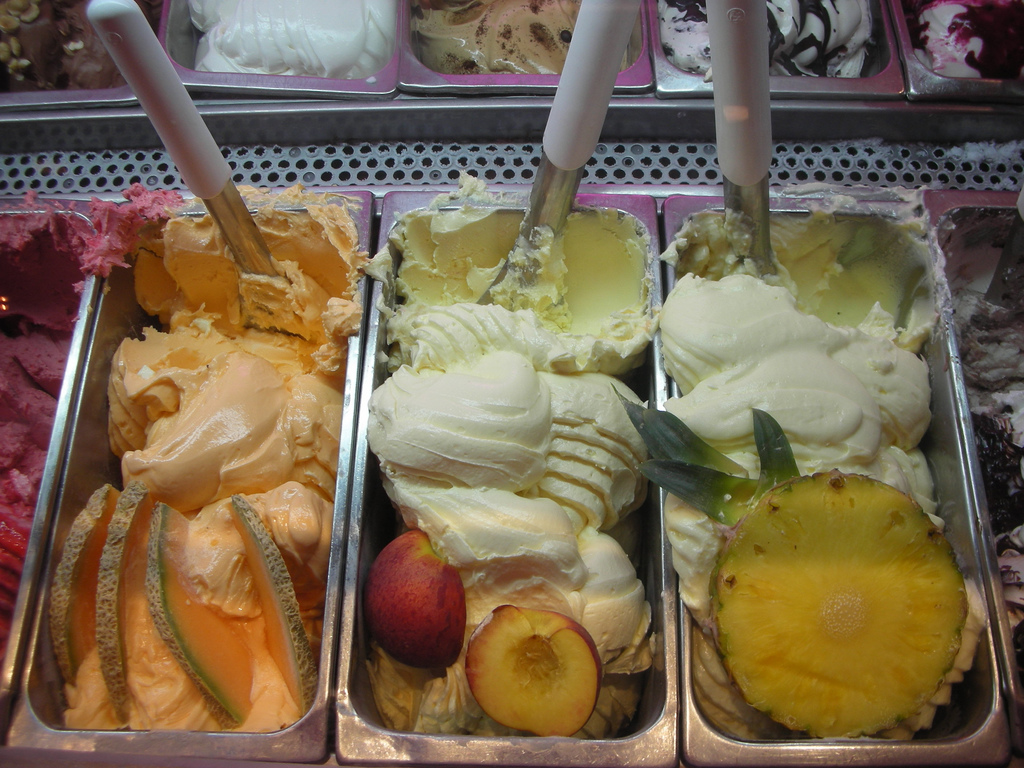 Do I need to say anything else? I say, let’s talk about Sicilian gelato. Maybe you are thinking of coming to Sicily and not trying a cone? Are you out of your mind?? Mulberry, lemon, pistachio, chocolate, almond, peach, strawberry, pineapple, mint, hazelnut, vanilla and chocolate hazlenut….

If you are really hungry, I suggest that you don’t forget to get your gelato on a brioche. How about some strawberry, peach and cream, maybe?

…If after all this food …

….. you are still alive and you are convinced to come to Sicily, don’t forget to enroll in my cooking class!

You can look forward to a fabulous experience.

And, at the end, you will receive a diploma that pronounces you a Mini Chef of Sicily! 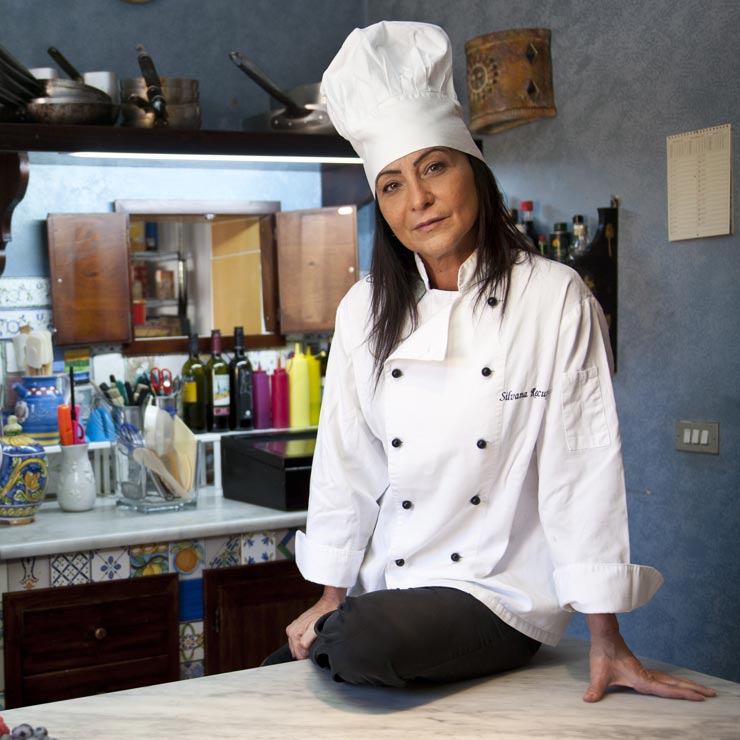 Why? Because when I write about food, I think about food.

I imagine it and I can’t get it out of my head. I am very hungry, always. One can’t talk about Sicilian food without paying that price.

To me, a panino (sandwhich) with anything! An arancino with meat sauce! A slice of cassata! Right now, I could kill anyone who stands between me and the kitchen, me and the refrigerator, me and the pantry!

More than the Godfather,

I am the Godmother of Sicilian cooking, and I wear the "coppola" hat!

Write to Silvana at: info@mammasiicly.com

You, Me & Sicily!" (American Network) : Godmother of Sicilian Cooking!
CookingClass #8, Helene family from Sweden
Book a Sicilian meal at your house
This site uses cookies. By continuing to browse the site, you are agreeing to our use of cookies.
Ok Find out more