Gibil Gabib
All the places 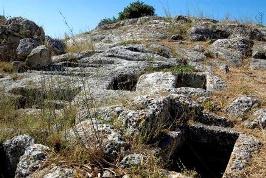 This name, which means “mountain of the dead” brings us quickly back to Arab Sicily, when the Muslims found several necropoli here (still visible). This site is about 5 kilometers from Caltanissetta, on a hill and it was inhabited since prehistoric times. The excavations have yielded numerous artifacts such as prehistoric flints, pottery, household items, dishes, lamps, a clay statue of a female deity, a clay head…At the foot of the hill extends two necropoli that gave us Siceliot (Greek) pottery boxes with red figures.
Few, but still exciting, the ruins visible on the three terraces of this site.

map
Interessante museo che conserva oltre 5000 reperti provenienti dalle aree attorno Caltanissetta e che risalgono sin dalla preistoria all’età tardo antica. Siamo al centro della Sicilia ed un tempo...
map
Environments of Pietraperzia Cuddaro do Crastu: is a beautiful place, dominating the valley of Imera South river. On its lower part, between various dug out caves, one arrives at the ruins of a...
map
The Antiquarium, in addition to the archaeological finds found in the area, preserves the sections and plans relating to the various areas of the town (from the middle of the Bronze Age to the 5th...
This site uses cookies. By continuing to browse the site, you are agreeing to our use of cookies.
Ok Find out more