Caratabia caves
All the places 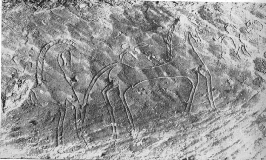 There are two rock-cut grottoes in which one can see magnificent graffiti. The grotto on the left consists of two rooms. In the first, the bigger one (7.50 m x 4.2 m), there are carvings of nineteen horses, a few with horsemen, arranged in groups, one or two tiers on top of one another. On the back wall stands the figure of one lone horse, a dog chasing a boar and a group of four horses, two with mounted horsemen, and all preceded by a human figure on foot holding a shield. The presence of three concentric circles is also curious. The next room has been used as a funeral chamber

And who is responsible for this graffiti? A Siculo (indiginous population) of 2500 years ago.

map
Monte Catalfaro The “rock mouse” (Monte Catalfaro in Arabic) is a beautiful rocky plateau with the plain of Catania below. Full of orange groves now, the plain were once crossed by a lush...
map
Ospitato in questo delizioso paesino della provincia di Catania, dentro l’ex seicentesco convento dei Gesuiti, ospita reperti della ricchissima zona archeologica dei dintorni: dalla preistoria al...
map
Housed in the eighteenth-century Interlandi masseria, in one of the most evocative places of the whole Sicily, the museum stand on the slopes of the homonymous archaeological area. Among prickly pears...