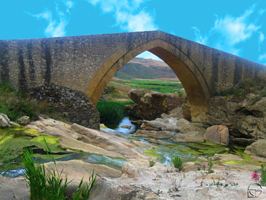 This area is characterized by the presence of an impressive Arab bridge downstream and at the top of the mountain, ruins of the Castle of Calatrasi (all Arab) and from the traces of a settlement  from the seventh to 5th century BC.

Up here, (mount Maranfusa, 476 meters) some dwellings have been discovered.
It is an ancient settlement whose traces go at least as far back as the 6th century BC with almost certainty that it was inhabited since the end of the 9th century BC.

We are in the area of the legendary Crimiso river, where 15,000 Sicelioti (greeks of Sicily) led by Timoleon defeated 70,000 Carthaginians led by Hamilcar and Hasdrubal (around 340 BC).

map
37°46'52.01"N   13° 7'28.26"E     A place of a poignant beauty, among the absolute masterpieces of Sicily that in one fell swoop...
map
In a landscape with a very high bucolic profile, one of the most excellent in Sicily, here is this particularly suggestive karst cave, right under the plateau of Entella, seat of the ancient city of...
map
Jato An ancient city in the Greek period (6th century BC),  it was very much in vogue. Very beautiful was its theatre (photo) which could hold 3000 spectators.  It is located 852 meters above sea...