A cave close by a lake
All the places

In a landscape with a very high bucolic profile, one of the most excellent in Sicily, here is this particularly suggestive karst cave, right under the plateau of Entella, seat of the ancient city of the same name from the 6th century b.C. (the few ruins are still visible today).
It is a completely inactive cavity inside, because no more water flows through it.
The walls are made up of gypsum macrocrystals, while splendid inflorescences of gypsum crystals, stalactites and stalagmites help to make this fairytale scenario more evocative.
The part currently explored has an overall development of about 400 meters, but recent explorations have led to the discovery of a new branch, located at a higher altitude than the other known levels of considerable geological, speleological and archaeological interest (bones, shards, etc.)
The overall development of the cave has thus risen to about 1 kilometer on at least four different levels of tunnels.
The entrance, vaguely elliptical in shape (1.50 x 1.40 m.), opens at an altitude of 388 meters.
The initial section of the cave consists of a meandering tunnel about 10 meters long and about 1 meter wide through which you reach the innermost parts of the underground karst system, passing through large halls, small jumps, barely accessible sections due to their small size. , slides and wells that admit in the highest branches of the cave.
Birds of prey such as buzzards, peregrine falcons and kestrels nest in the rocky wall that borders the fortress.
While the slopes, characterized by scrub vegetation, are home to rabbits, foxes and porcupines. 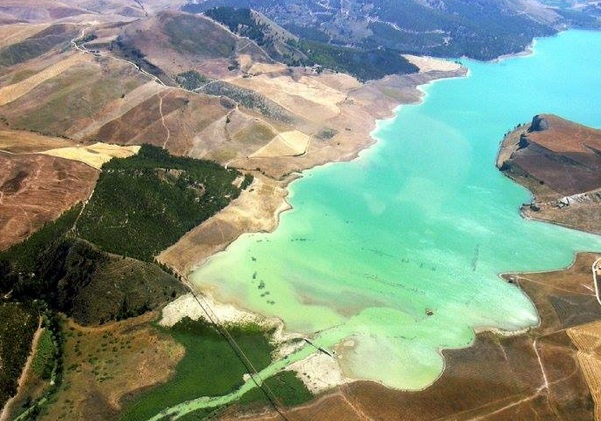 The nearby poignant artificial lake Garcia (photo), created after the damming of the Belice river, has become a resting place for migratory birds that stop there during the wintering period. The legend of the Grotto persists in the collective memory of the inhabitants of Contessa dei Dinari (literally Contess of the money, local name of the cave) where a treasure protected by spells is believed to be hidden.
According to another tradition, a crawling monster with fourteen heads lives in the cave: only by offering him a girl to feed him daily is it possible to quell his anger.

map
Il monte è un massiccio carbonatico formatosi per la lenta sovrapposizione di sedimenti fossili su fondali marini antichissimi risalenti al Trias superiore (per intenderci, al tempo dei dinosauri) e...
map
On the top of Mount Adranone, at 1000 meters above sea level, there are ruins of the Siceliota Adranon discovered by the Selinuntines of the 6th century BC, was then destroyed and rebuilt by...
map
The Triona mountain is 1215 metres high. On its slopes we can admire the wonderful sanctuary of the Madonna del Balzo built in the XVII century. From its terrace one can enjoy a stunning view of the...
This site uses cookies. By continuing to browse the site, you are agreeing to our use of cookies.
Ok Find out more