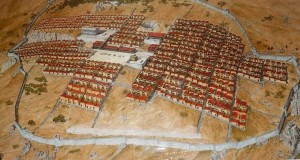 A Phoenician city founded in the 4th century BC, and from the Carthaginians, was subsequently passed to the Romans in 250 BC.  It is still beautiful owing to its position in the countryside above of Mount Catalfano. Inside of the archeological park there are sacred areas interspersed with civilian buildings with the sea making a spectacular backdrop. Also on site is an interesting Antiquarium.

Right after the entrance to the archeological area you begin the climb to the top of the mount, the original location of the ancient city.

It is important to note that what we see today are buildings belonging to successive dominations (Greek and Roman).

The road system is classic Greek grid-style (Hippodamian), and has a main street paved with stones cut at right angles in rectangle shape and others of different sizes to overcome the difficult terrain. 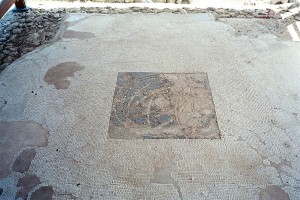 The houses that are most interesting are definitely the ones that were built over several floors with rooms around a courtyard bordered by columns. Among these houses is the mythical house named “Casa di Leda” which is on three levels with beautiful mosaic floors and painted walls (photo). At the top of the house, there is access from the street, while the rooms facing the street had to be used as tabernae (shops for rent). Probably the pride of this house is the astrolabe mosaic in one of the rooms, with a representation of the celestial sphere.

Continuing to walk on the street you find a number of other houses in which several paintings and frescoes have been restored.

A little before the Agorà  is a sanctuary that has an altar and a sacrificial tub (probably to collect blood).  Behind this sanctuary is a courtyard that ends in a small room, perhaps the place where the sacrificial animals stayed (there still are watering place for the animals).

Today, the Agorà (photo 3), the public area, has ruins of many public buildings, an enormous cistern and an area used for commerce. You can still see the foundation of twenty-six pillars from the porch (photo). 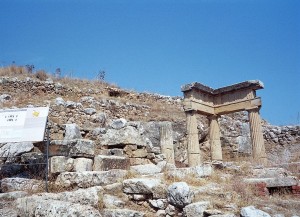 Near the Agorà are the ruins of the theater and of the thermal baths, where you can still see the underground supports for the passage of hot air and a room with a mosaic floor.

Another house of interest is the so-called Casa del Ginnasio (gymnasium, photo), with an atrium and courtyard that still has 3 marvellous column in the Doric style. You can also see the stairs that lead to the upper floor.

The view of Palermo and Mount Pellegrino is splendid.