Indigenous center later Hellenized, that translated chronologically means it was inhabited from 3000 BC to about 400 BC.
The settlement occupies the plateau of a mountain (at 720 meters high) dominating a valley, where the river Salso flows. At one time it was navigable and one of the main pathways, like a thoroughfare, in the interior.
Spectacular views, as always, it seems like these Sicilians of the past had a fondness for the “zen” horizons, beyond a merely defensive scope. 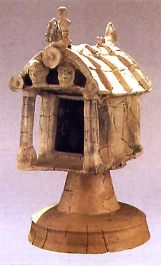 At the foot of the hill prehistoric settlements had been developed with circular huts where we can still see the holes for the insertion of the wooden poles. There was a very intense life here as evidenced by several findings, such as a globular vase on feet with little ears (very modern in design) and bowls with decorated surfaces, numerous templates utilized for melting metal weapons that clearly indicate the presence, inside the settlement, of a foundry.
The highest part of the mountain had stone houses with a rectangular forms. There was a sacred area that yielded a beautiful “temple shrine” (photo), in the 6th century BC, that is preserved in the Antiquarium site: a sanctuary supported by a pedestal and decorated with human figures and animals.
One sees temple ruins with traces of altars and tracts of walls. For the record, Sabucina was one of the victims of the Siculi’s led by Ducezio (that in the 5th century BC, destroyed it) in their attempt to oust the eternal Siceliots (Greeks of Sicily) from the island.

map
The Antiquarium, in addition to the archaeological finds found in the area, preserves the sections and plans relating to the various areas of the town (from the middle of the Bronze Age to the 5th...
map
Interessante museo che conserva oltre 5000 reperti provenienti dalle aree attorno Caltanissetta e che risalgono sin dalla preistoria all’età tardo antica. Siamo al centro della Sicilia ed un tempo...
map
GPS CAPODARSO: 37°29'40.02"N   14° 8'51.43"E A mountain, a bridge and a source, that is: Etna, the Capodarso bridge and the Aretusa fountain in...