Syracuse and Ortigia
All the places 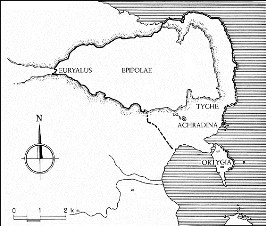 Now a day a UNESCO world heritage site, in the 5th century BC, Syracuse was the most powerful city in the Mediterranean, and we could say the entire western world. That would be enough to imply the magnificence of this city, founded in 734 BC, and a reason to visit it. The capital of Sicily for around a thousand years, Syracuse today has magnificent testimony to its glorious past. Let’s go together to this corner of Paradise.

Ortigia is a small island of incomparable beauty, linked to Syracuse by a bridge. Here, history is in every corner. Ortigia (which means “quail” in Greek) was one of  five zones of the Greek city (the others were Neapolis, Achradina, Epipoli and Tiche) and it is located between the two most famous ports of ancient Syracuse, the large and the small. 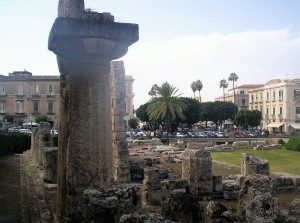 Just after entering, there are ruins of an ancient gate and alongside, the doric Temple to Apollo (photo) of the 6th century BC. It measures 55.36 x 21.47 meters and has 6 columns on the short side and 17 on the long side. Remaining also are a few capitals and columns. 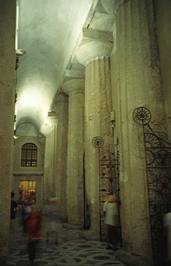 But, the thing that is truly magnificent in Ortigia is the Temple to Athena (photo) which is actually tucked inside the Duomo. this mix between greek and christian style it’s really emotional and evocative for the visitors.

The temple was of the Doric order of the 5th century BC. It was dedicated to the victory over the Carthagenians in the Battle of Himera in 480 BC.

It had six columns and many of them today delimit the nave of the Christian Church. This all sits in one of the most beautiful piazza’s in all of Italy, this one in Ortigia.

Among the castles, palaces from every era, splendid streets, elegant doors, marbles, Baroque and so on and so forth, you arrive at the Fountain of Arethusa, a mythical enclosure of glassy water where papyrus grows. A symbol of the people from Syracuse, this legendary fountain has been written about by many poets, captivated by both the legend and this charming place; Virgil, Pindar, Ovid, Silius Italic, Milton, Andrè Gide, Gabriele D’Annunzio, just to name a few. Cicerone wrote about it (in Verrine): “ … an incredibly grand fountain, teeming with fish and so situated that the waves of the sea would flood it were it not protected by a massive stone wall.”

In the Norman era, the Arab writer Idrisi descrive it like this: “Wonderful source whose name is An Nabbudi (Arabic for Arethusa) that stands on a cliff by the seashore.”

Leaving Ortigia, we move to the vicinity of Neapolis, the zone where we find a few of the most important things that have emerged in Syracuse. We are inside the Archeological Park. After entering, and on your right is the Basilica di San Nicolò dei Cordari (11th century) and right after, on your left, a nice tree-lined street with stone sarcophagi, taking you to the Roman Amphitheater (around 2nd century BC), carved in rock.

The dimensions of the amphitheater, in eliptical form, are noteworthy: 140 x 90. Under the arena (70 x 40), closing to a high podium, and a corridor 1.60 m high called “crypt” that served as the exit point for both the gladiators and ferocious beasts. Above the podium there are the steps for the important spectators with their names carved above their seats.

In the center of the arena is an underground area where they are preserving the machinery used during the spectacles. 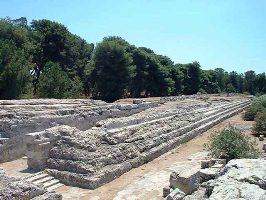 A little beyond the amphitheater is the Ara di Ierone, (Alter of Hieron, photo) of the 3rd century. It has two entrances where two sculptural supports (telamones) stood. You can still see the feet of the one on the right. In part it was carved in rock, in part constructed, it was a sacrificial area, 198 meters long and where the bulls came to be sacrificed during the Eleuterine holidays, 450 at a time. 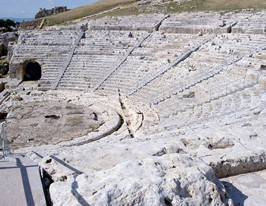 Once past the Ara, on the right, one arrives at the Greek Theater (photo) of the 5th century BC. This is the largest one in Sicily and one of the biggest in the world.

Today the cavea (the seating area dedicated to the spectators) has 46 steps and is divided into 9 sectors (wedge-shaped) of lateral stairs. In the center corridor (diazoma) a little further up, you can see inscriptions in Greek. And what inscriptions! Here are the Greek names of Gelone II (perhaps), son of Hieron II and who died before him, of Nereide, his wife, of Filistide, wife of Hieron II and of Hieron II. In the area of the fifth wedge was the name of Olympian Zeus; there was also the name of Heracles and a few others, but somewhat illegible.

At the summit of the seated area is a big artificial grotto characterized by the presence of four niches that no doubt held statues.

Above the theatre, begin the Via dei Sepolcri on Temenite hill. Go along this spectacular road of the past for 150 meters. There are niches that housed statues of the Greek heroes, underground Byzantine tombs and a noteworthy relief depicting Dioscuri on horseback and Trittolemo in his chariot pulled by snakes.

Here we also see the grotto of Ninfeo that inside has a rectangular tub with a waterfall. We see four other niches, two smaller and two larger on the outside, later transformed into graves. Above the opening to the cave is a Doric frieze, made in the rock from which little remains.

Behind the cave is a 15th century construction, the house of the millers, an ancient mill with signs of evidence in street, ruts from the carts that came to load and unload.

Under this small house, one can see a typical funeral oven cave from the Sikels. 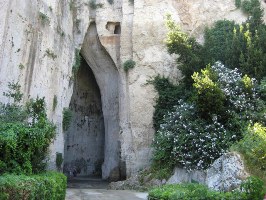 One of the most fascinating attractions found in the park are the caves or quarries, of which the most interesting is the “Latomia del Paradiso”. Across from that you come to the most famous cave in this park the “Ear of Dyonisus” (photo). It is the major attraction, aside from the Greek Theater, for tourists visiting Syracuse. Here is an artificial cave measuring 23 meters high and in the shape of a funnel. Legend says that it was used as a prison for the poor Athenians (who dared to challenge the powerful Syracuse) who died there of starvation.

To the east of this we find the Grotta dei Cordari (the rope makers) because in the seventeenth century that is where they processed hemp, making all kinds of rope. We can also see signs of the stone used in construction. The area is particularly evocative when the bottom is covered with rain water or ground water seeping from the vault.

Other quarries are the cave of Salnitro, the cave of the Intagliata and that of Santa Venera, whose northern wall is characterized by numerous votive niches.

To the east is the Greco-Roman necropolis of Grotticelli, characterized by ruts, graves and two niches (one of which is particularly impressive). Above all, you can see the tomb chambers of the Roman era, including the two monuments at the top decorated with small Doric columns in relief, that are surmounted with a gabled pediment.

The one facing south and observable from the street that borders the park, has traditionally, but improperly, been called the Tomb of Archimedes. It is actually a columbarium, which is a Roman burial chamber, with two rows of niches to hold the funeral urns. 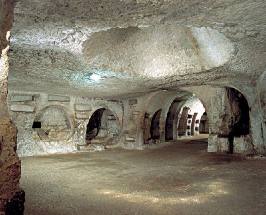 We pass the Catacombs (photo), that in all their splendor and majesty are evidence of the first Christian presence in the Roman era, when the situation for them was not very good. As far as dimensions go, the catacombs in Syracuse are second only to those in Rome. The only ones open to the public are those of San Giovanni (while those that are closed are Santa Lucia and those of Vigna Cassia, both splendidly painted on multiple levels), dating to about 300 AD. From the main gallery, the Decumanus Maximus, begin passageways and niches, square and circular rooms, and five chapels. Of particular interest, in the main corridor, is the arcosolio (or main niche) to the virgin Deodata with paintings of Christ, of the Virgin and of Saints Peter and Paul. The catacombs show beautiful traces of paintings and of special interest are the funeral inscriptions in Greek and Latin in this catacomb complex. 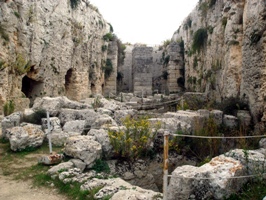 About 7 kilometers from Syracuse in the direction of Belvedere, stands the Castello Eurialo (photo) that is not really a castle but a tremendous defensive rampart with an area of 15,000 square meters. The moats, towers, drawbridges, and underground trenches, were built in 400 BC by Dyonisus the Elder, during the period when Syracuse was the most powerful city in the world. We are in the high part of Syracuse, in the zone named Epipoli. It took 60,000 laborers and 20 days to build a long wall, 5,000 meters, in defense of the northern part of Epipoli; the rest was built six years later.