A mount, a bridge, a fountain
All the places

A mountain, a bridge and a source, that is: Etna, the Capodarso bridge and the Aretusa fountain in Syracuse.

According to the 18th century traveler Jean Houel, these were the three great masterpieces of Sicily.

Perhaps the emphasis, which at the time was a "disease" common to all the writers, did exaggerate our tourist ante-litteram but certainly he was struck by the magic that this place evokes.

Capodarso is a concentrate of pure energy.

It is the perfect encounter among landscape, nature, archeology, agriculture, mystery, passion, colors.

It's a wonderful place.

Beautifully evocative, in the center of Sicily, the area is characterized by a series of naturalistic and archaeological emergencies.

Basically it is divided into a high part and a valley.

The upper part, Mount Capodarso, dominates the valley with its wheat fields, the river, and the gorges determined by the river.

You reach the top right from the sixteenth-century Capodarso bridge (photo), through a path that first runs along the river, amidst the deep canyon, and then climbs to the top.

On the way you will meet the ruins of the Giumentaro sulphur mine.

On the top there is not a real path and we suggest you to walk close to the part overlooking the valley. 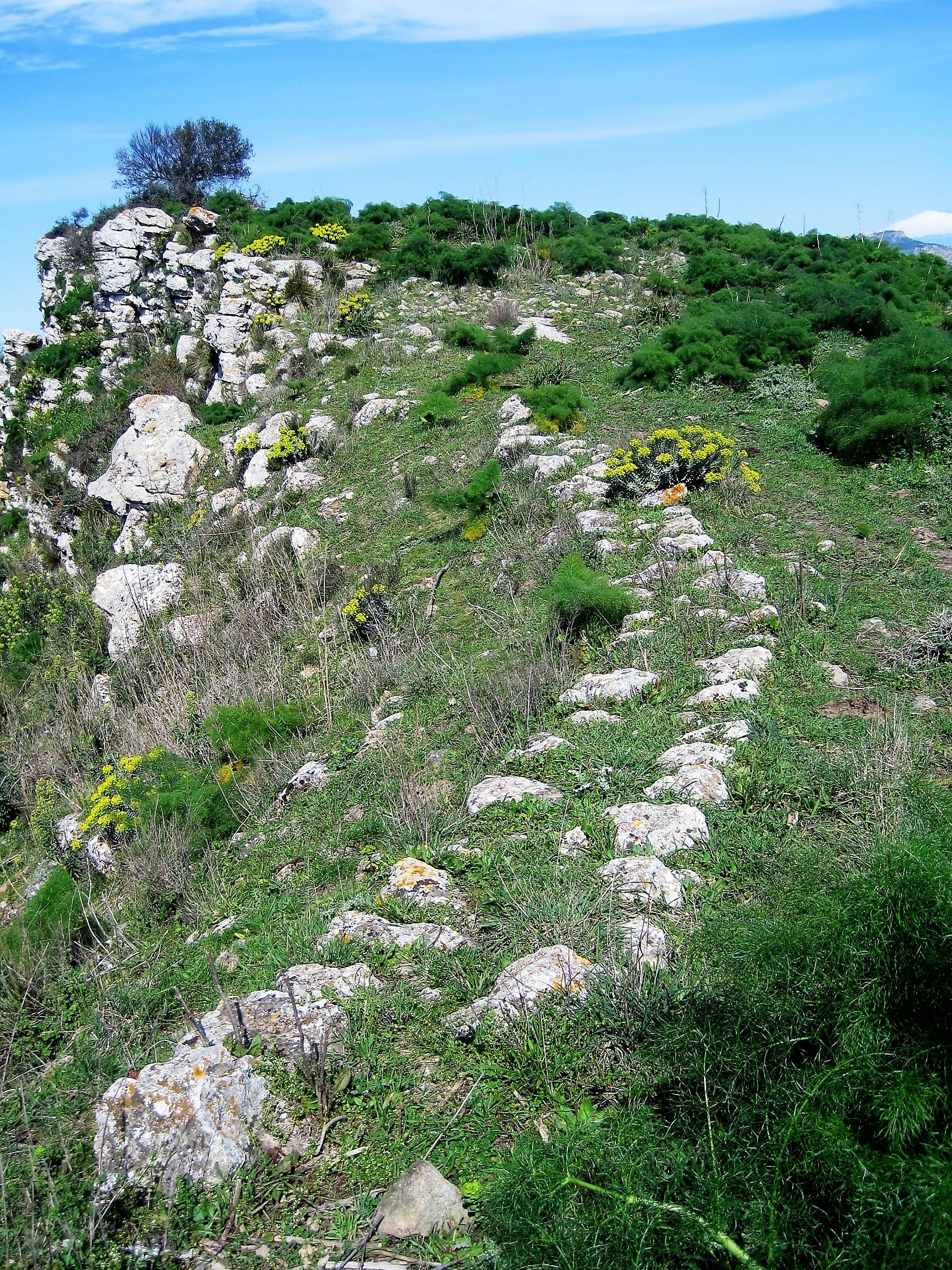 You can still see the city wall that run for almost 300 meters along the side of the mountain.

The land is rich in ceramics and ruins of houses can be seen.

Few, very few ruins, but the site is of great emotional impact.

From a geological point of view in the area there are rocks of the chalky-sulfifera series.

In fact in the Messinian there was a deposition of salt following the closure of the Mediterranean basin that led him to isolate himself from the nearby Atlantic Ocean.
Gradually evaporating, the waters caused the deposition before the less soluble salts and then of the more soluble salts leading to the formation of the evaporitic series (chalky-sulfifera series).

Reason for which you can still see many shells of that distant time.

The area in the past was the site of several sulphur mines among which the Giumentaro and Trabonella.

Downstream of Mount Capodarso is the natural reserve of the Imera river (or Salso). 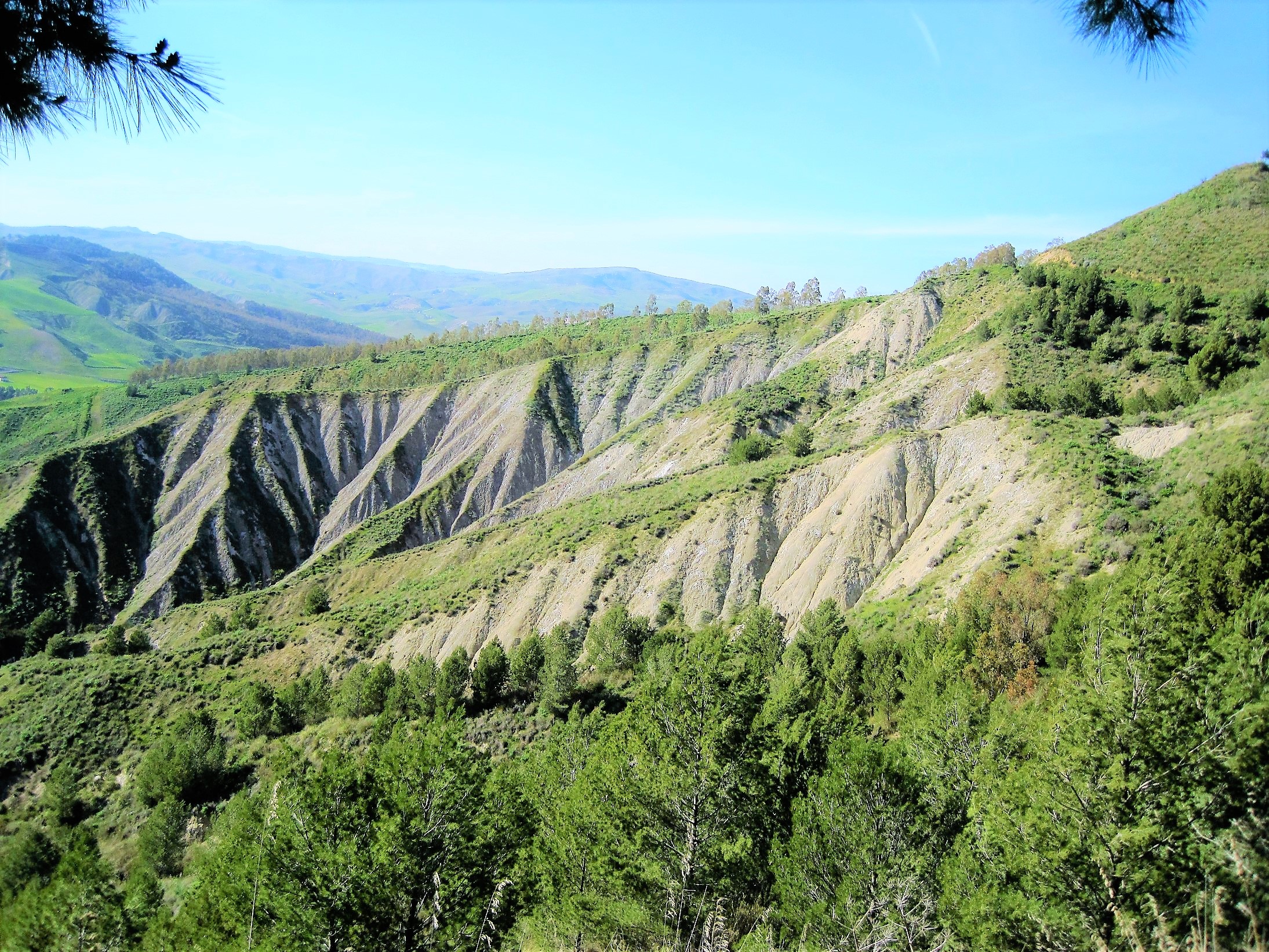 One of the most beautiful excursions is the so-called Grotta delle Meraviglie cave, a largely still unexplored karst cavity.
In this area many birds nest among which the wonderful Black-winged stilt. The flora is represented by the typical Mediterranean maquis.

There are also areas cultivated with cereals and forage, olive groves and almond groves. In the area there are also many typical and ancient Sicilian farms, all in stone.Another characteristic feature are the so-called calanchi (photo), branched furrows that are formed by soil erosion due to water washout on degraded clay rocks.

map
The Antiquarium, in addition to the archaeological finds found in the area, preserves the sections and plans relating to the various areas of the town (from the middle of the Bronze Age to the 5th...
map
Sabucina Indigenous center later Hellenized, that translated chronologically means it was inhabited from 3000 BC to about 400 BC. The settlement occupies the plateau of a mountain (at 720 meters...
map
Valle del Morello This is a wonderful part of Sicily, right in the middle of the island, that is characterized by a series of grand masterpieces of archeological nature. In this valley, the river...
This site uses cookies. By continuing to browse the site, you are agreeing to our use of cookies.
Ok Find out more