The town of eternal love
All the places

Erice: the town of the eternal love 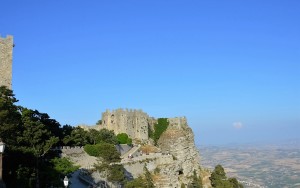 Erice is a beautiful city that has some of archeological sites of the first order. The city became famous in antiquity because of a temple to Aphrodite, goddess of love: the temple of sacred prostitution.

There wasn’t a traveler that didn’t know it, not an historian that didn’t pass on the news.

It was so popular, perhaps ongoing from 1000 BC that the Romans, after conquering the island some 800 years later, built a same one in Rome (where Aphrodite became Venus). Sacred prostitution was very much in vogue in ancient civilizations, especially in the East. In the temple, there was a priestess, they prayed for prosperity and love for the community of Erice. According to Ierodule, the sacred prostitutes, received a fee, but it was then donated back to the temple. The prostitutes were often young virgins of good families, or even slaves, or priestesses of the high temple. They were treated with the utmost respect by the “client.”

Herodotus wrote: “ A woman must go to the shrine of Aphrodite once in her lifetime  and join together with a stranger (…).In the sanctuary of Aphrodite many women sit with a crown on their head.  When a woman arrived, she could only return home after one of the strangers threw money in her lap and united with her…” 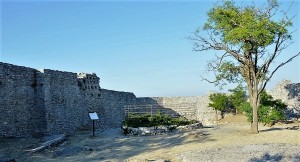 It was in the absolute sense, the most famous temple in the Mediterranean and with its fire always lit atop of Mount Erice, it attracted many a traveler.

There is something magical and mysterious about this story since the town of Erice, if viewed from the top, looks triangular in shape, like the female organ !  Of the temple there remains only the well of Aphrodite (photo), a sacred vessel that contained holy water. Between myth and legend, this is all that is left!

The well is located in the outer courtyard of the castle itself on the highest point of Erice.

Walking Erice is a utmost experience being this town one of the most wonderful middle ages villages of Italy.

You can enjoy a gorgeous panorama from Erice, overlooking the Egadi islands. 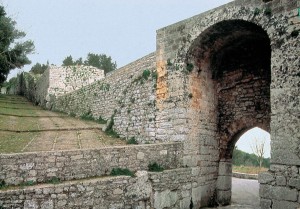 Of great importance to Erice are certainly the Punic walls (photo) and the city’s entrance gates. The walls, with their megalithic blocks are truly something extraordinary