Petra di Calathansuderj
All the places 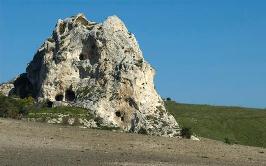 This spectacular limestone crag (70 m long by 40 m wide and 30 high) rises by itself and suddenly amidst the “calm” of the hills of this part of Sicily.

It was the seat of a prehistoric village, at the foot of the hill, as is evidenced by the numerous “oven” tombs or caves.

But the extraordinary thing about this site is the complex of rooms and galleries on four levels, often connected, constructed around the Byzantine era (6th century AD). Rooms, warehouses, silos, cisterns and stables open along the perimeter of this  remarkable rock.

Inside the rock, fragments of pottery were found that were datable from the bronze age to the lower middle ages. This makes us believe that the site was occupied for a long time.

map
These are active volcanoes emitting gas and mud, and sometimes assuming an explosive character. In various parts of Sicily, these phenomena exist, but these of Aragona are certainly the most...
map
Monte Conca (Naturalistic Reserve) Monte Conca it’s a limestone plateau characterized by a geologycal formation of 5 millions of years ago.   It’s crossed by the river Gallo...
map
Tomba di Cocalo Cosi’ come Ducezio fu il re dei Siculi ad oriente, Cocalo fu quello dei Sicani, ad occidente, entrambe popolazioni pre-greche. La capitale del popolo sicano era Camico, che...
This site uses cookies. By continuing to browse the site, you are agreeing to our use of cookies.
Ok Find out more