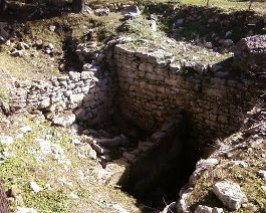 In the area of the town of Castel di Iudica, is this monte that reaches almost 800 m high and which, beyond being a beautiful part of the countryside, has interesting archeological ruins that date from the prehistoric to medieval times. On top it has, in fact, various tombs carved into rock, cisterns and various buildings (foto) among which are a few belonging to the lower middle ages (like the ruins of Eremo della Gabella from the1500s).
We are on the Plain of Catania in an area between the river Dittaino and Gornalunga. Among the various buildings is one in particular with walls higher than two meters, with three rooms and a floor made of dirt and greenish clay. Found here were statues and pottery coming from the 6th century BC.

Still belonging to the comune of Castel di Judica, but a little beyond is the Monte Turcisi on whose summit one finds beautiful ruins of a Greek fortress (phrourion), probably from the 6th century BC. This fortress was a military outpost for control of the Plains of Catania and the river Dittaino below (at times certainly navigable and a natural way to carry information between inland and the coast).
The most interesting aspect consists of enormous monolithic blocks (photo) and walls made of local limestone for the defense of the territory. Worthy of attention is the entry way to the phrourion. Also notable is the series of particularly large cisterns, one of which, in the south-west and in close proximity of the phrourion, is built completely of lava with regular fronts and rounded corners.

Inside of the fortress, perhaps in the 16th century, a hermitage dedicated to San Giacomo was discovered in which the remains of the Church and a few rooms of the convent are preserved.

map
Montagna of Ramacca A place of much archeological interest, is the Montagna di Ramacca. It faces the Plain of Catania and at one time was full of people near the rivers and on the various...
map
Conserva principalmente i reperti della ricchissima zona archeologica dei dintorni (la Montagna). Segnaliamo: manufatti d’industria litica su selce e quarzarenite risalenti dal Mesolitico (8.500...
map
Cassataro cave n the Picone area, behind the river Simeto, is the grotto (covered) where there are a few carvings made by prehistoric Sicilians (5000 BC?). They are pictures in red ochre, among...
This site uses cookies. By continuing to browse the site, you are agreeing to our use of cookies.
Ok Find out more