Montagna of Ramacca
All the places 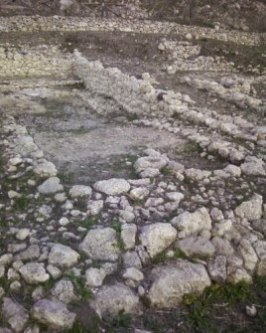 A place of much archeological interest, is the Montagna di Ramacca. It faces the Plain of Catania and at one time was full of people near the rivers and on the various hills.

At 559 m high, this mountain, with a broad panorama of the valley, has traces of life from the Neolithic period (5000 BC). Perhaps the seat of the lost Eryke, in the 7th century BC, it was occupied by the Sicelioti (Greeks of Sicily). Almost at the foot of the acropolis, on a part high on the mountain, are ruins of the so called RM house. Built of dry stone walls and consisting of two rectangular rooms equipped with quay, furnace and a well, kitchen pottery, large pits, intended to conserve water and food, plus some iron hand tools ( a saw, knives) were found.

Buried, they are preserved the best way possible. Close by, and clearly visible are eleven enormous blocks of square stone, perhaps a temple or at least some type of important civic building. Far from the plain one sees again, remains of various buildings and, in the northern sector there are brick walls.

The dwellings are surrounded to the east, west and north by the necropolis. In the western necropolis, there exists examples of monumental tombs, like the so called “Tomb of Timpano”, an excavated room in the rocks decorated with an elegant triangular pediment, and the big tomb with antichambers and a gabled ceiling. A little beyond and worth mentioning are the sites: Perriere Sottano, where traces of a settlement were brought to light from the high Paleolithic era (30,000 years ago); the area of Castellito where, south of that same farm, one finds a Roman villa (today buried for safety reasons) with mosaics and where perhaps was the Capitoniana (resting place), along the axis of the Katane-Agrgentum.

The exhibits of the findings from Ramacca are preserved in the local Museo Civico.

map
Conserva principalmente i reperti della ricchissima zona archeologica dei dintorni (la Montagna). Segnaliamo: manufatti d’industria litica su selce e quarzarenite risalenti dal Mesolitico (8.500...
map
Housed in the eighteenth-century Interlandi masseria, in one of the most evocative places of the whole Sicily, the museum stand on the slopes of the homonymous archaeological area. Among prickly pears...
map
COSTE DI SANTA FEBRONIA     37°19'29.71"N    14°45'43.72"E We are in the area of Palagonia, where the oranges are a very serious thing,...
This site uses cookies. By continuing to browse the site, you are agreeing to our use of cookies.
Ok Find out more