Walking the past
All the places 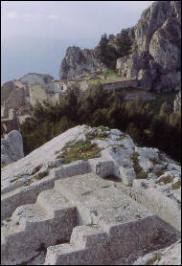 A very ancient city, which is immediately apparent just after entering, where there are 22 tombs and grottoes of prehistoric origin. The necropoli are all over and Caltabellotta is one of the sites that claims, perhaps for good reason with respect to the others, to have been the seat of the untraceable yet powerful Sicanian city of Camico, where according to legend, king Cocalo hosted Dedalus.

In the high part of the town is what has come to be identified as a sacrificial altar (photo) to Kronos, in the form of a double staircase. It was used in the Greek and Roman age. In Sicily, the cult of Kronos was practiced principally in the west.

map
In the territory of the town of Sciacca, city of spas, on Mount San Cologero or Mount Kronio, the reserve has a natural system of underground caves: Stufe di S. Calogero, Grotta di Lebbroso (Leper),...
map
Housed inside the archaeological area of the same name, it preserves the finds of the homonymous Greek-Punic site (IV-V century BC) of Monte Adranone, including a series of prestigious bronze belts...
map
The museum is located on the top of Mount Kronio. The caves in the area have returned findings from prehistoric and historical times including forty large vases of the third millennium BC. Inside the...