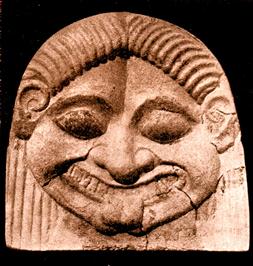 A wonderful place from a landscape point of view, at 595 meters above sea level, this was perhaps the seat of the ancient Sicani city, Maktorion, from the 8th century BC. Whether or not, Mount Bubbonia was later occupied by the Siceliots (Greeks of Sicily) and its ruins are, in fact, of that period (6th – 7th century BC).
Triumphant, as always with these inland archeological mountains, is its naturalistic and agricultural landscape. Just getting there is exalting. The peak dominates over a large area. It rises in the east, passing among the few remains of the wall; on the Acropolis (the western part of the summit’s plateau) there are interesting remains of what must have been a temple, and where the Gorgon in the photo was found.
There isn’t much, but it is still a beautiful place, surrounded by eucalyptus trees and with a great panorama.
On the eastern slopes of the mountain is a necropolis where one can see a beautiful 2.20 meters long dolmen “chamber”. It was certainly the tomb of an illustrious person.

Bubbonia returned an amazing amount of archeological material including amphorae, bowls, a crater with red figures representing the struggle between Apollo and Hercules for the possession of the Delphic tripod, alabaster, a skyphoide cup with black figures, and a beautiful red figure kylix with Herakles running inside. So, alongside the traditional Sicilian vessels, typically Greek vases predominated. It is easy to assume that this site was completely Hellenized by the end of the 6th century.

map
Monte Navone Monte Navone overlooking the Braemi river and was inhabited during the VII century B.C. up to XII century. We can find few ruins. The settlement is at 750 m. a.s.l. in a stunning...
map
Montagna di Marzo At 700 meters high are the ruins of what was almost certainly an important indigenous city that was later Hellenized. Their most important moment had been during the Siceliot...
map
Roman villa of Casale This stunning villa contain the richest, largest and most complex mosaics in the world of the Roman era. A UNESCO World Heritage site, the villa has exquisite mosaics from...
This site uses cookies. By continuing to browse the site, you are agreeing to our use of cookies.
Ok Find out more