Roman villa of Casale
All the places 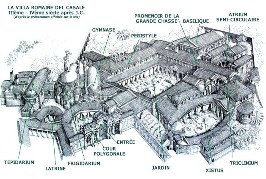 This stunning villa contain the richest, largest and most complex mosaics in the world of the Roman era. A UNESCO World Heritage site, the villa has exquisite mosaics from 350 AD making it absolutely a masterpiece of beauty. The villa has a very particular history, being that it was preserved by mud for some 1600 years! It was, in fact, only in 1950 that it came to light. Walking in the interior it has the distinct feeling of wealth, of the skills of the Arab artists, of the pagentry and the beautiful life that must have been the owner’s.
One enters through a monumental entrance across from a passageway of three arches with fountains leading to the spa and the villa. From the vestibule one enters the peristyle where one finds a mosaic with diverse animal heads. Inside the villa, one sees many spectacular works of mosaic art, such as: 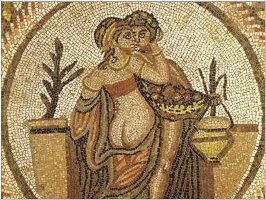 -The Corridor of the Great Hunt, gives access to the manor’s apartments, in which the mosaics represent the capture of the animals for the battles against the gladiators in the Roman amphitheaters.

The mosaics are made with square tiles ranging in size from 5mm x 8mm.
-The Basilica, alongside the Corridor of the Great Hunt, has an entrance marked by two columns. Here the owner received guests.
-The north apartment can be found on the north side of the basilica and it is decorated with the stories of Ulysses and Polyphemus. Alongside this apartment there are other rooms containing spectacular mosaics with scenes of children playing, fruit baskets, pairs of lovers,….

The south apartment has scenes with tritons, sea horses, the myth of Orpheus, Pan and Eros,…. 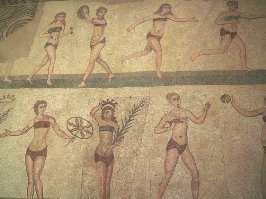 The young girls in bikinis, the first in history, is another cycle of mosaics in which there are ten girls engaging in athletic exercise.
– The room of Orfeo, thati is represented with a lira, near a three, surrounded by 50 animals.

We hope to have you curious about this because to describe well its magnificence would not be nearly enough! Do not miss this Sicilian masterpiece.

map
Maktorion (monte Bubbonia) A wonderful place from a landscape point of view, at 595 meters above sea level, this was perhaps the seat of the ancient Sicani city, Maktorion, from the 8th century...
map
Monte Navone Monte Navone overlooking the Braemi river and was inhabited during the VII century B.C. up to XII century. We can find few ruins. The settlement is at 750 m. a.s.l. in a stunning...
map
Montagna di Marzo At 700 meters high are the ruins of what was almost certainly an important indigenous city that was later Hellenized. Their most important moment had been during the Siceliot...
This site uses cookies. By continuing to browse the site, you are agreeing to our use of cookies.
Ok Find out more