A king, a huge rock mountain, a forest, and a romantic village
All the places

It is an extremely beautiful place, where art and nature integrate perfectly.

The area was born as a hunting reserve for Ferdinand III of Bourbon, in the nineteenth century, and presents a great variety of environments: various types of woods, rocky and semi-rocky areas, wetlands both river and lake, grasslands and grazing garrigues.
In short, we are in the presence of over a thousand different plant species and almost all of the animals present in Sicily. The Rocca Busambra is a huge, suggestive, 1613-meter-high boulder that overlooks the wonderful Ficuzza wood, once, as mentioned, a true hunting reserve for kings.

This is the reason why on its slopes, as if it were a cathedral in the desert, is the Casina Reale di Caccia: nineteenth-century, majestic, superb Bourbon residence where King Ferdinand and beautiful company came to hunt.
The romantic village of Ficuzza was born around it. Here, among the low houses choreographically set between the natural reserve and the beautiful sandstone, there is a beautiful watering place (for animals)trough and the stables of this royal "solace" (solacia).

From the village of Ficuzza several nature trails depart, full of rest areas and leading to forests of holm oaks, oaks, downy oaks, cork oaks, and others.
The whole area is very interesting from a floristic point of view due to the presence of numerous endemisms including the Busambra cornflower, Boccone's fennel, the Sicilian ciombolino and others.
In the area of ​​Rocca di Busambra there is also one of the few Sicilian stations of belladonna (Atropa belladonna).
Among the animals we point out the wild cat, the weasel, the fox, the hedgehog ...
Unfortunately, large mammals have disappeared, such as wolves and deer. 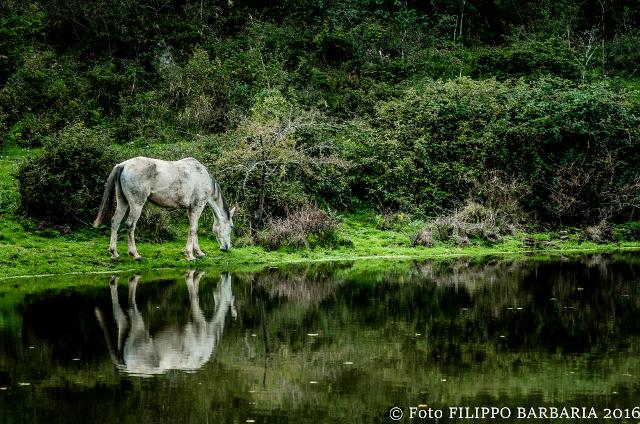 Birdlife is mainly made up of tits, jays, blackbirds and others.

The reserve is characterized, as well as by an evergreen Mediterranean forest, by the so-called "vortici", natural lakes where the reproduction of amphibians, marsh turtles and insects occurs.
The best known was Gorgo del Drago, now dry for most of the year. A hundred meters away is Gorgo Lungo, which is still regularly fed even in the summer, which maintains the habitat unchanged.
The landscape is suggestive. Embedded in a basin, it can be accessed from a particularly wet gully rich in moss and lichen. Covered with a green layer of duckweed, it houses the marsh turtle. And finally we have Gorgo Tondo which was used for fishing by King Ferdinand IV of Bourbon during his stay in Ficuzza.
Inside the reserve there is a wildlife recovery center that would be happy to close, but as long as there is some idiot who shoots birds ...

map
Inside this beautiful, sixteenth-century castle is the Beccadelli museum which preserves archaeological finds from the area and above all from the various settlements distributed along the course of...
map
Arab termarium of Cefalà Diana These spas are one of the few examples left from the Arab period. Beautiful pointed arches embellish this delightful place from the past. The building, with a...
map
Delizioso specchio d’acqua incastonato tra i campi di grano che numerosi solcano le collinette di questa zona, il lago di Piana degli Albanesi è il più antico bacino artificiale della Sicilia...
This site uses cookies. By continuing to browse the site, you are agreeing to our use of cookies.
Ok Find out more