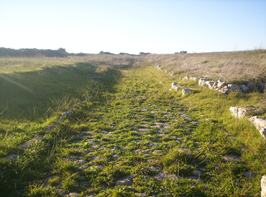 Spectacular Siceliota (of the Greeks of Sicily) city of the 7th century BC, Akray was one of the most important colonies of Syracuse and it is located at the top of a hill. There are several archeological attractions.

Just after entering, on the right is the evocative Selinuntina Road (photo), that connected Syracuse and Selinunte, passing right by here. You can still see the pavement of this street projecting a view of the past.  Moving closer to the street, there is a series of buildings outside of the wall. 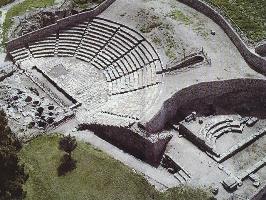 Just beyond the entrance gate, we enter the Agorà. Here is the small and beautiful theater (photo) that is joined, through a tunnel, up to the seventh tier, the bouleuterion (the public Senate). The theater has a wonderful view of Etna.

Above the theater one can see ruins of several buildings and, among these the remains of the Temple of Aphrodite of the sixth century BC, of which remains large square blocks and part of the cell. 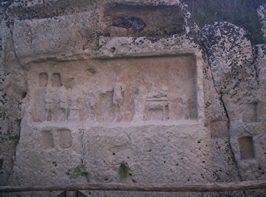 The archeological area has very particular latomie that initially were used for the extraction of the rock for the construction of the town of Akray.  And, infact, the mountain, entirely carved, created deep gullies. Later they became a necropolis and even later, homes.
And then you see wonderful canopied tombs, alternating catacomb tunnels and caves of all shapes and types; an almost subterranean world, extracted from the walls of Akray.

Along the walls of the latomie you can see several niches where they had placed wooden and clay tablets on which were recorded the names of the Greek heroes. Of great value is a bas-relief of the 1st century BC depicting a sacrifice and feast of heroes (photo).
Shortly beyond the archeological site there are the so-called Santoni, 12 sculptures, from the 3rd century BC, carved in stone and dedicated to the worship of the Goddess Mother (Magna Mater), goddess of nature, animals and protector in a general sense. Magna Mater was revered by all peoples of history (the first was Cybele, in Phrygia, who became Rhea for the Greeks and Magna Mater for the Romans). She was celebrated from March 15 to 28th with games in her honor (called Megalesia, which began April 4). Of their kind, these were absolutely unique in the world and constitute a veritable Way of the Cross of the pagan religion. 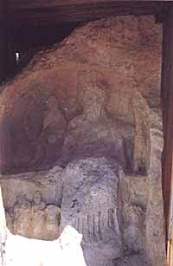 Each of the 12 figures show the goddess Cybele (photo) seated on a throne with a chiton, a long robe with her right hand holds a patera and on the sides, always, were one or two lions, animals sacrificed to the gods. A little ruined by time, we recommend that you imagine when the goddess, adorned with bronze or gold crowns, bracelets, more or less valuable (the holes on the side of the head and arms were used for that) flowers and more.

map
Dedicated to the homonymous poet and anthropologist of Canicattini, this house-museum recreates the rooms of the iblea farm house. On the ground floor there are the premises of the massaro, a man of...
map
Ddieri, from the Arab Al diar (house) are dwellings carved in rock, often in inaccessible places. They are characteristic of this Hyblean area and they are found in the walls of the canyon, to say...
map
It is the highest peak of the Iblean mountains, reaching to 986 meters above sea level. The name is derived from the Latin, Laurus ‘laurel’, because in the the past there were many of this tree...
This site uses cookies. By continuing to browse the site, you are agreeing to our use of cookies.
Ok Find out more