Jato
All the places 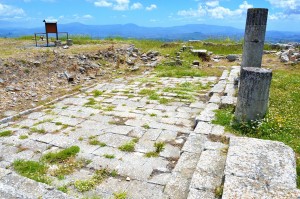 An ancient city in the Greek period (6th century BC),  it was very much in vogue. Very beautiful was its theatre (photo) which could hold 3000 spectators.  It is located 852 meters above sea level and the peak is fortified naturally on three points, with access allowed only from the east. In short, it was almost impregnable.

The landscape of western Sicily is spread out below for the visitor to admire, while the mountains, so prevalent in this part of the island seem to be on top of one another.

At the entrance to this archeological site there are sections of wall, after which, there are two peristyle houses with beautiful floors.
Once you reach the top there is the agorà (town’s central spot), an important area of 2000 square meters, paved and  surrounded by a Doric colonnade.
Inside you can see the ruins of the bouleterion (boardroom) and various temples. 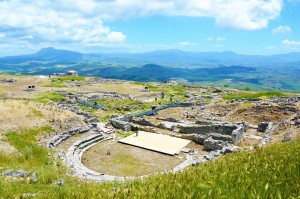 In the northwestern part of the Agorà is the theater, that dates from the 4th century BC.
Continuing to the west, you will find the public cistern, or a hollow in the ground some 35 x 20 meters. Continuing again, you will see the ruins of the Temple of Aphrodite.