Montagna di Marzo
All the places 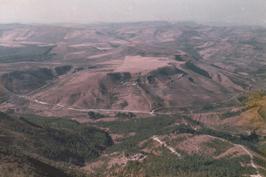 At 700 meters high are the ruins of what was almost certainly an important indigenous city that was later Hellenized.
Their most important moment had been during the Siceliot (Greek) period (6th century – 3rd century BC). Walking around you can see remains of various structures.
At about 500 meters from the plateau, on the southern edge is a sacred area including diverse altars and bases of temples that extend to the west until the cliffs of the Ruggello Valley.
At about 100 meters in the north-east are the remains of a building that contains a sacrificial altar with wells for votive offerings (the altar to Demeter) around which there was a great quantity of Hellenistic pottery.
The necropolis is beautiful located in many slopes of Montagna di Marzo. 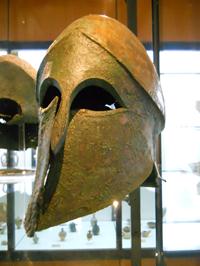 It has returned excellent archeological finds including the skeletons of two warriors, complete with helmets. One had a ring on his finger, his sword at his side and a strigil (a metal scraper often used by athletes to cleanse the body of creams and oils…).
Walls on various parts of the hill made it possible to identify the city limits.
Continuing the walk, south-east of the plateau, is a Hellenistic building while everywhere else are various structures and cisterns that came from the 5th century BC until the Hellenistic and Roman times.

Also here, are the ruins of a monumental tower built into the wall (next to the so-called East Gate).
Finally, behind the east walls, you can also see the ruins of a Hellenistic Odeon, with a 37 meter diameter, that seems to have had a multi-purpose use. Next to this is a cistern and a limestone plinth of uncertain use (altar, base ?). 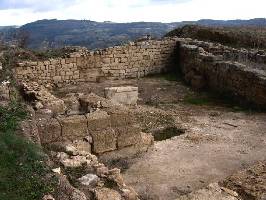 Powerfull, as usual, the context of the landscape is of large plains below to circle the ring of mountains and the cornucopia of other findings of archeological interest: in the east is Cozzo Rametta, in the south Mount Manganello with the Rabottano and Critti areas, in the west Mount Polino, in the north, Mount Ramursura, and the Serra d’Api and Balatella areas.
The city extends for twenty acres on the plateau, but all of the archeological area covers more than eighty acres.
The urban plan of the acropolis uses a type of orthogonal Hippodamian artery system with which subdivided the area into blocks.
The recovered artifacts, from pottery to coins, from masks to weights, from bronzes to small jewels, from armature to statue fragments to the most varied objects are all scattered in museums in Syracuse, Agrigento, Caltanisetta, as well as in the warehouses of the Palazzo Trigona Piazza Armerina.
The mountain slopes have beautiful forests of pine and eucalyptus. The herds, as usual, lack for nothing.

map
Maktorion (monte Bubbonia) A wonderful place from a landscape point of view, at 595 meters above sea level, this was perhaps the seat of the ancient Sicani city, Maktorion, from the 8th century...
map
Monte Navone Monte Navone overlooking the Braemi river and was inhabited during the VII century B.C. up to XII century. We can find few ruins. The settlement is at 750 m. a.s.l. in a stunning...
map
Roman villa of Casale This stunning villa contain the richest, largest and most complex mosaics in the world of the Roman era. A UNESCO World Heritage site, the villa has exquisite mosaics from...
This site uses cookies. By continuing to browse the site, you are agreeing to our use of cookies.
Ok Find out more