Walking the history in Adrano area
All the places

In the western part of the province is the Greek city of Adrano dating from the 5th century BC. It was one of the most important in Sicily. Today it’s ruins are sadly encased in cement. What remains visible is an excellent stretch of strong walls (photo) with blocks of lava stone and a half meters thick. 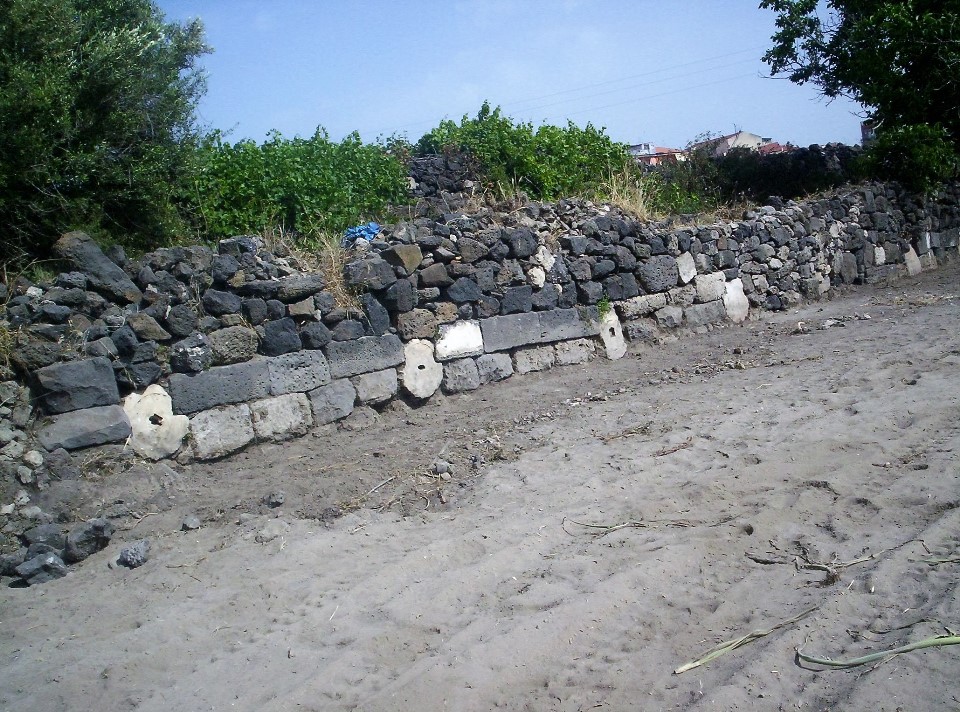 The wall, probably made in 400 BC, has huge square blocks, one on top of the other, with no mortar in between them, typical construction of the Siceliot (early Greeks of Sicily).

Other stones are round and were certainly used for transport as is evidenced by the center beam holes. Once they were used, they were put into the wall.

At Adrano we also find a famous temple: that of the native god Adranos that was surrounded by one hundred ferocious dogs. Traces of this building can be identified in the sixteen basalt columns of the mother church today. 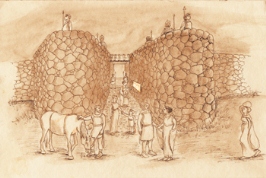 But according to many scholars, the traces of this temple can also be found in the valley near the river Simeto, where are the ruins of the very delicious oranges , the city of Mendolito. One sees almost nothing as you arrive. You can find it with a guide or a farmer to help.
Mendolito was founded by the Siculi around the 10th century BC and later Hellenized by the Greeks (5th century BC). What remains are the strong stones of the monumental city gate, lava stone, (reconstruction in photo) on which some Siculo writing was discovered, that is still undeciphered today (in the Museo Orsi in Syracuse). It was, maybe, a writing of welcome.

The many findings indicate bronze treasures, but today they are spread all over the place. .

South of the city of Mendolito, in the area of Sciare Manganelli, one finds a necropolis with a tomb that has a circular plan to which can be accessed by crossing a small corridor (dromos).

The tombs were constructed directly on the lava bench and were designed to accomodate more than one person, almost certainly families. 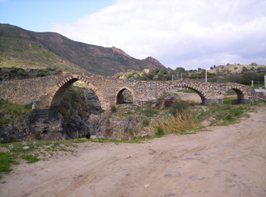 A few kilometers into the valley of Adrano (around 8 kilometers), where the river Simeto flows (the longest river in Sicily), are the imposing remains, Roman – Arab – Norman of the Bridge of the Saracens (photo).

This very elegant construction, in lava stone with pointed arches, is tucked away in the silent groves of the amazingly delicious oranges of this part of Sicily. The original bridge probably built by the Romans, has a clear Arab-Norman style. Lovely. The bridge was the subject of fascination for many visitors on the Grand Tour and they recorded this fascination in water color and in prints of all sorts. It is certainly not passable now, but not only because it could not hold weight, but also because at this point, it is probably good for nothing.

Eventually, visit the beautiful Norman dungeon (XI century), in the middle of the city, that shows an archeological museum.