A river full of history
All the places

These gorges are gorges that have been formed by the thousands of encounters between lava stone from ancient eruptions and the water from the river, in this case, the Simeto.

The area starts in the vicinity of Bronte on top of the bridge of Cantera, in the district of the same name.
Here with a height of 50 meters (“the leap of Cantara”), are the lava walls (from the eruption of 1603), on both sides, and covered with the Mediterranean shrubs, rushing out to the water. 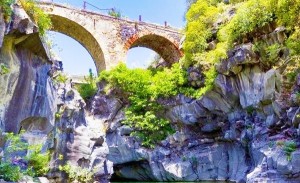 Shortly after, the Simeto receives, to the right, the tributary of the Troina, where you see the beautiful Serravalle Norman bridge (photo) .

Its medieval arcades are characterized by a particular color, formed by the use of local basalt rock and alternating with white tufa. It was built by Count Roger in 1121 in memory of his mother, Adelasia, who died in Patti in 1118.

On the bridge, you pass the old road that connects the hinterlands of Sicily (Cesarò, Troina) to Catania and Messina. A few steps away are the Serravalle houses, a typical, large Sicilian farm with an annexed chapel. 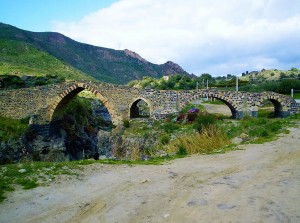 The Simeto continues its descent, among interesting lava formations and basalt columns, due to the sudden cooling of the flow when it comes in contact with the waters of the Simeto. After an almost pristine walk, rich with canyons, waterfalls, spectacular glimpses….you arrive near the bridge of the Saracens (photo), another bastion of great archeological landscape and architectural valour

On the banks of the river you can see pebbles of many different colors that originated from lava. It is not rare to come across pebbles and shells, that are amber color, very clear and that once in awhile contain preserved fossils of animals, that makes them very precious (photo).

Among the oleanders, climbing rocks and captivating rushing water, also notice the variety of crops, typical of the area: pistachio (among the finest in the world), citrus, almond, fichidindia (prickly pear)… all grown in the water of the Simeto and lava soil. 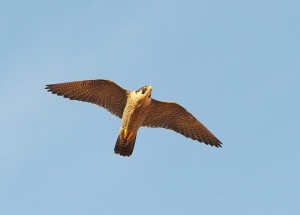 For the fauna, those represented include the snake, fox, rabbit, hare, lizard and others.
For migratory birds, we have peregrine falcons photo).