The lava ruins along Catania
All the places

Catania is one of the oldest and richest archaeologic cities of Sicily. The problem is that lava has practically submerged a good many of its ancient monuments.

Let's have a stroll among the ruins of this city.

The Roman Amphitheater  (photo) is beautiful, even though a good part of it is under lava. This amphitheater was supposed to be the most monumental and hold 30,000 people ! (half of which would have been suited on wooden scaffolding to expand the capacity). It was probably constructed in the 2nd century BC and was supposedly very rich in marble. How many gladiators had seen this place! 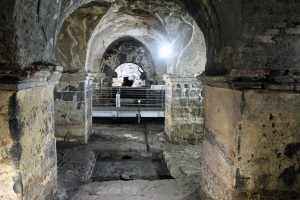 The Roman Baths in Piazza Duomo (photo) are in the city center, from where the long Via Etnea departs.

In the center of the square is an Elephant, the symbol of the city. It sits atop an obelisk and on the south side of the underground river that the Greeks and the Romans knew well. The Amenano river suddenly emerges in this piazza right where one finds the Pescheria, an unlikely spot.  On the south side of the piazza, under the Cathedral, are the Baths of Achilliane of the 5th century. They were supposed to have been very large but they have been covered over many times by lava flows and as the result of earthquakes. What is left to see now is the Frigidarium. 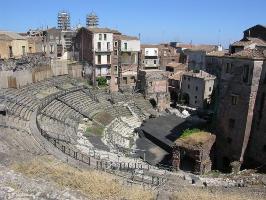 The Greek-Roman Theater is on Via Vittorio Emanuele. It is beautiful even though it is now unfortunately set too close to the neighboring buildings. It consists of an auditiorium with nine tiers and a fascinating and complex system of corridors accessing different areas of the structure. It is very sumptuous and shows Corinthian columns and an entrance through three doors that leads to the stage. There are many niches once decorated statues.

Still visible in the orchestra area is the marble floor in numbered sections. It’s date is somewhat of a mystery, but probably between the 4th and the 3rd centuries BC.

Behind it there is the Odeon, a semicircular auditorium that was originally used as a rehearsal space for the actors.  A series of outer walls enclose rooms that might have originally been used as shops.

The Baths at the Rotonda are two; the first in Piazza Currò and the second in Via della Rotonda. Both date from the Roman era. The first were more imposing with a large octagonal room and a dome above. The Baths of the Rotonda were used as a church from around the sixth century,and today, even after the bombings of the second world war, there is still one room with the dome.

map
Giovanni Verga (Catania, 1840 - Catania, 1922) was a Sicilian writer and playwright, who in many of his works has beautifully recounted men and events of his island. Housed in a nineteenth-century...
map
Eight lava caves, almost in the center of town, itself in a lava field. In length they reach about 1.5 kilometers. Today inhabited by bats, in the past the housed people (Bronze...
map
Near the fishing village of Acitrezza, about 200 meters from the shore, there are these spectacular rocks (Islands of the Cyclops) that legend has it were the put there...
This site uses cookies. By continuing to browse the site, you are agreeing to our use of cookies.
Ok Find out more