A factory 2500 years old
All the places 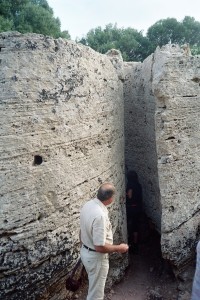 They are unsurpassed in its state of preservation. The incredible remains enable us to analyze and see every phase of work done on the stone.
If they did not have to come here, the slaves were very happy !

First they extracted the stone and then cut it with metal tools to make circles (in the case of columns).

They dug deeper and deeper, cut from here and adjusted from there, to get the stones ready for transport.

This was done by making two holes in the two surfaces of the columns, which were then attached to a cart and transported to the site with the use of draft animals, the number of which was determined by the weight of the pieces.

Once they arrived, the temple was literally assembled on-site, with the columns and other decorative aspects finished by expert sculptors.

What makes this site one of the most extraordinary places in the world is the fact that the drums of the columns still look as though the workers just left for lunch.

A 2500 year long lunch ! This is a very impressive place and one of the rarest of its kind in the world.