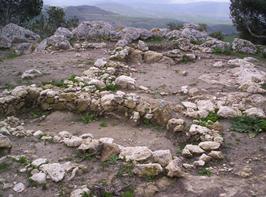 Cuddaro do Crastu: is a beautiful place, dominating the valley of Imera South river. On its lower part, between various dug out caves, one arrives at the ruins of a prehistoric circular hut, datable to 2000 BC (photo).
Pervasive in this entire area are pottery fragments and various objects that tell us that the site was used since Medieval times. The highest part, on top of a rock which is accessed via a staircase carved into the rock, has ruins of a building that was probably a phrourion (a typical Greek outpost from the 5th century BC).
The cisterns here are exceptional.

Tornambè-Fastuchera: close by and almost a continuation of Cuddaro do Crastu, is this area. This location, used from prehistoric times (2000 BC) and up to the Siceliot period (4th century BC), is characterized by a quintessentially Sicilian necropolis with tombs and caves carved in rock.
Here we dominate the Valley of Salso, in the standard beautiful Sicilian landscape: endless expanses of undulating hills and horizons of wheat.
On the right, with respect to the summit of the site, above the Traina property, is a large dry stone wall, that starting from Fastuchera, pushes eastward, like a frontier, bordering both sides.

Cirummeddi (photo 2): a mysterious construction in a pyramid form that resembles a ziggurat from Mesopotamia and that someone suggested may have been a Neolithic sanctuary (BC) to honor the sun.
The pyramid, 55 meters long and 30 wide, is composed of three tiers of terraces with four stairs corresponding to the four cardinal point, that lead you to the top. Here one finds two constructions carved in the limestone rock, that resemble altars used for rituals.
These shrines contain two, almost spiritual, forms: that of a circle (the symbol of time) and that of a square (the symbol of the earth).
Behind the pyramid, to solidify the suppositions, there are two big circular cavities that were probably places of sacrifice. 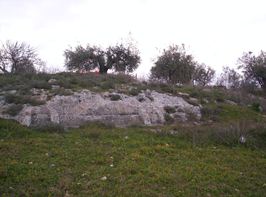 Ritual divan (photo 3): is located in the area of Balati and this very curious couch carved in rock gives no explanation to any archeologist. It is certainly a strange sight, seeming like it is completely out of place.

As written by Hugh Adam, contemporary historian (2012): “It remains, finally, and beyond any attempt at scientific discourse, the amazement and the great charm of this chair, close to which you can get the feeling of being next to a tribal chief or a religious caste

map
37°27'10.18"N   14° 4'35.81"E This name, which means “mountain of the dead” brings us quickly back to Arab Sicily, when the Muslims found several...
map
The Antiquarium, in addition to the archaeological finds found in the area, preserves the sections and plans relating to the various areas of the town (from the middle of the Bronze Age to the 5th...
map
Interessante museo che conserva oltre 5000 reperti provenienti dalle aree attorno Caltanissetta e che risalgono sin dalla preistoria all’età tardo antica. Siamo al centro della Sicilia ed un tempo...
This site uses cookies. By continuing to browse the site, you are agreeing to our use of cookies.
Ok Find out more