The Byzantine Cube of Santa Domenica

An isolated masterpiece on the Alcantara river
All the places

The Byzantine Cube of Santa Domenica 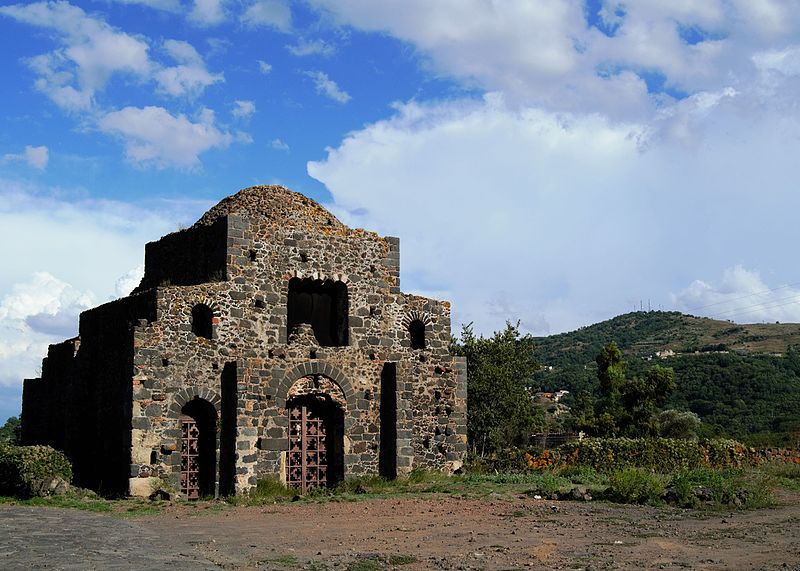 This is an exceptional small Chapel built of lava stone (photo) and bricks in the sixth – seventh centuries. It is from the middle of the Byzantine era as evidenced by the layout which is a Greek cross with a characteristic Moorish dome, 3 apses and a very clear near eastern style.

Until 50 years ago, sheep roamed inside but it has now been rescued from further decay and one can find and enjoy it in the middle of the vineyards of Castiglione di Sicilia. Alongside this chapel runs the Alcantara River where the Arabs tried to breed crocodiles!

This structure, that pops up suddenly in the countryside, is really like a mirage, but it is truly one of the hidden masterpieces of Sicilian archeology, if off the beaten path for tourists and inhabitants alike.

A few steps from Castiglione di Sicilia one finds Malvagna, and in that bit of countryside, one finds a similar structure.

map
It’s the highest top (1374 meters) of Peloritani mountains. From its top one can enjoy a wonderful view of Ionian sea and of the Eolian islands ! Maybe the most beautiful path to get there is...
map
A great and magic place. The best way to approach it is from Montalbano Elicona. Located between the Peloritani mountains and the Nebrodi mountains, the Malabotta wood (700 - 1300 m asl)...
map
Sperlinga cave A cave inhabited since prehistoric times in a position that, even today, is almost primitive; in the forest, hidden, and almost inaccessible! A very curious place, extremely...
This site uses cookies. By continuing to browse the site, you are agreeing to our use of cookies.
Ok Find out more