The name of this river means “the bridge” (al qantarah, in Arabic) and it divides the province of Catania from that of Messina. The Alcantara, where in the past the Arabs tried to breed crocodiles unsuccessfully, starts in the Nebrodi mountains and, after 52 kilometers, drains into the Ionian Sea. The most characteristic event of this river was its encounter for millenia with the hard and obstinate lava rock. The result was the formation of deep gorges visited by many tourists during the year. 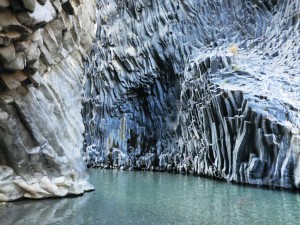 The gorges are in many places but are at their most spectacular near Motta Camastra, where very high walls were formed, smoothed by the water. The contrast between the incandescent lava and the water of the river gives rise to fabulous basalt prisims. And all of this in the middle of extremely wild vegetation clinging to the walls. A unique experience, in these parts, is to immerse yourself in the icy waters of the Alcantara on a hot Sicilian afternoon (around 40 degrees temperature difference).

On the highest part of the river, in Castiglione di Sicilia, we report the presence of a splendid Byzantine Cuba (5th century BC) in the adjacent countryside, a beautiful Greek cross and constructed of lava stone and bricks. Near the mouth of the river is Naxos, the first colony founded by the Greeks around 740 BC.

The source of the river, is found in the town of town Floresta, in the park of the Nebrodi mountains at about 1400 meters (Serra Barratta).
After its start, at a certain point the river bends sharply to the east, leaving the Nebrodi and flowing between Etna on the right and the Peloritani on the left, creating a fertile and beautiful valley of the same name, rich in crops and lava fields.

Near the town of Mojo Alcantara is an ancient volcano of unknown origin, while nearby at the edge of Malvagna, is another Byzantine Cuba.

map
GPS:  37°53'16.13"N   15° 6'13.62"E   This is an exceptional small Chapel built of lava stone (photo) and bricks in the sixth – seventh...
map
It’s the highest top (1374 meters) of Peloritani mountains. From its top one can enjoy a wonderful view of Ionian sea and of the Eolian islands ! Maybe the most beautiful path to get there is...
map
It’s the highest point (884 meters) of the natural staircase that from the sea of Giardini Naxos, trough Taormina and Castelmola reaches the hinterland of this...
This site uses cookies. By continuing to browse the site, you are agreeing to our use of cookies.
Ok Find out more