Monte Scuderi
All the places 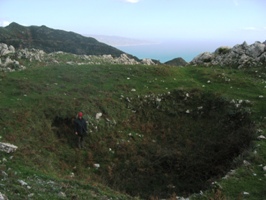 At 1253 meters above sea level stands this mysterious mountain in the chain of the Peloritani. Getting there is quite an experience enhanced by the fact that you can do so on a long nature trail, in other words: a long walk tucked away in nature.
Between valleys, oak trees, rivers,  hollies, hawks, buzzards, the train glides in these iron mountains (because they are rich in mineral deposits) that were formed 250 million years ago. It goes through various Fossa delle Nevi (photo), huge holes in the ground from which at one time came the ice that was distributed to the closest towns.
The view is certainly a big reason to take this hike, alongside Etna and opposite Italy, with the sea that serves as the absolute master of this lovely picture.

After nearly two hours of walking we finally arrive at the top, a huge plateau with mysterious traces of the past, from prehistory to the early Middle Ages. 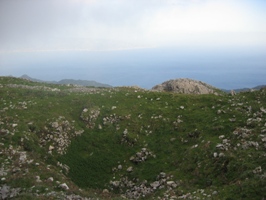 It is believed that this was the Byzantine town Mikos.
Whether on the south side, where the paths converge coming from Ali and from the valley of Fiumedinisi, or at the Porte del Monte, on the northern side, where the paths converge coming from Itala, Pezzolo, and Altolia, there still exist traces of a massive wall defending access to the plateau. At the top are the ruins of several buildings with typical rock crystals of the place. In the southeast, near large piles of stones there is a huge room called the King’s House.

The land around this area is littered with fragments and shards of various types from the Byzantine era. Also found have been coins of the time (8th century BC). Finally, one can not but recall the most significant fact about this valley: the legend of “truvatura”, which is a treasure that for centuries has been repeatedly looked for, not only by the population but even by nobles and king of Sicily. Maybe something is really there!

map
At 1253 meters above sea level is this very mysterious mountain chain, the Peloritani. Getting there is quite a wonderful experience accentuated by the fact that you can make it by taking a long...
map
Caratteristiche Generali I monti Peloritani sono una catena montuosa che si sviluppa nella Sicilia nordorientale. Essi si estendono per quasi 70 chilometri da Capo Peloro fino al confine con i vicini...
map
It is a beautiful naturalistic experience, which pierces the Peloritani mountains from the Sanctuary of Antennamare (Dinnammare in Sicilian) up to Portella Mandrazzi, near Rocca di Novara di...
This site uses cookies. By continuing to browse the site, you are agreeing to our use of cookies.
Ok Find out more