A city wall perfectly preserved
All the places 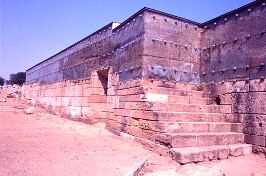 A city of extraordinary importance from the past, and one of the most powerful of the Mediterranean Sea from the 6th century BC. Today its ruins are truly in tatters but over the centuries, the sand has miraculously preserved the most exceptional example of the world of Greek military architecture: the Wall of Timoleontee di Capo Soprano, almost 400 meters of sandstone built to defend the city.

It is an awesome defense structure some 3 meters thick. You can see the bases of several towers and the staircases for access to the top of the walls. Of great interest is the construction technique of incorporating crude bricks in the upper parts of the sandstone blocks.

In the south part, next to the base of a tower, opens a gate that leads to the pointed arch that served the guards during their night watch. In some places the walls are higher than 10 meters and really give the feeling of the power and impregnability of this ancient city.

In this archeological park of Capo Soprano, among the eucalyptus trees, there are also medieval ovens and various public and military buildings of the Greek era.

Gela was destroyed in 282 BC and the wall was slowly, slowly submerged in the sand of the sea. It was in this manner that it was preserved for our eyes!

In the park, we also find a small Iconographic antiquarium with images and reproductions from Gela’s ancient past. 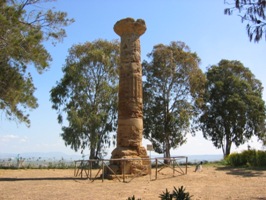 Next to the wall, behind the Vittorio Emanuele Hospital, one finds the Terme Ellenistiche (spas of the 4th century BC), that have two separate areas.

Another place to visit in Gela is the acropolis, in the area of Mulino a Vento, where there are but a few remains including a solo Doric temple column (photo), 8 meters high and still standing! 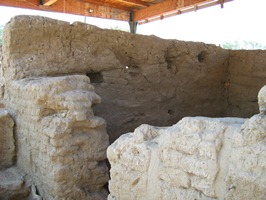 To the south of this is the area called Bosco Littorio that is Gela’s ancient emporium complex. It consists of workshops, store houses and shops.