All the magic of a huge forest: lakes, trees, rivers, animals, peaks, landscapes and Sicilian gnomes!
All the places 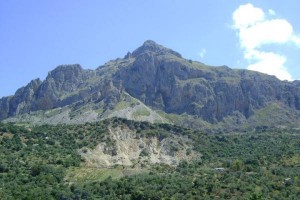 It is a wonderful walk that wounds the Nebrodi to the heart. 70 kilometers of woods, lakes, landscapes, uncontaminated nature.

Ready to enter a dream? Here we go …

P.S. We have assumed a route with west-east. It is understood that it is possible to follow it also in the opposite direction. 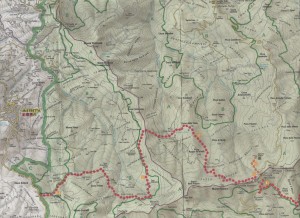 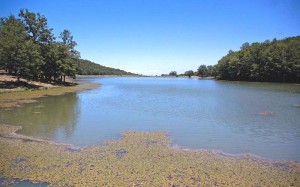 The route starts from Serro Merio, along the SS117, about 5 kilometers from Mistretta.

As soon as you take the path immediately on the left, you can quickly reach Urio Quattrocchi (1030 m.s.l.m., photo), a circular pond, very pleasant to visit as it hosts several species of water birds, on the slopes of Mount Castelli (1566 m).

The small stretch of water is bordered by a wooden fence and in its vicinity is an equipped area that makes this place a favorite destination for many visitors.

After passing the Urio (on the right is a fountain in local stone) go along the main road towards Case Pomiere, meeting the sumptuous woods of Medda and Mascellino, where majestic beech trees stand out together with Turkey oak and oak.

We are between the Castelli mountains (1566 m) and Pomiere (1544 m). Here is also a large watering hole. Continuing to walk in the forest we arrive at Case Mascellino and therefore we continue to climb until we reach 1306 meters in the Acqua dei Vitelli area. We are inside the municipal domain Moglia 1347 m. s.l.m. in which there is a natural forest of almost 50 hectares, consisting of secular badgers. As you continue to climb, you reach Portella Pomiere and Timpone Mirio. 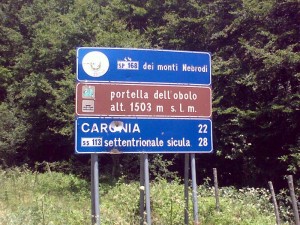 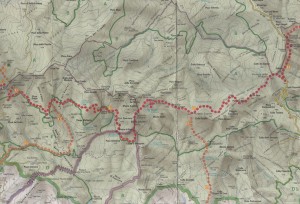 Leave Portella dell'Obolo (1503 meters s.l.m.), descend following the SP168 and, after about 1 km, turn left taking a dirt road. We are immersed in a forest made up of specimens of oaks and beeches while the undergrowth is made up of spots of holly, butcher's broom, bramble, hawthorn and perastro.
We arrive therefore, always soaked in secular cerrete, at the Barracks Mafauda (former barracks of the Forestry Corps) and subsequently in Portella Calcare 1410 m. s.l.m. from where it is possible to go back up Monte Pelato 1567 m.s.l.m. from where the view is one of the most fascinating, opening onto Mount Etna and the peaks of the Nebrodi mountains and the nearby Madonie mountains.
We continue the main route immersed in a majestic beech forest and, always at a constant altitude of about 1400 meters, we arrive at Portella del Ceramese first and, after about 12 kilometers, in Portella Scarno.

Here you can take the path to the right and make an excursion to the Sambuchello Barracks former barracks of the rural guards and to the distant (10 kilometers) Lago Ancipa (948 meters s.l.m.) from where the Simeto river originates.

Also known as Lake Sartori, Lake Ancipa is a large artificial reservoir in the territory of Troina, Cerami and Cesarò. The mirror of water is typically surrounded by a beautiful mixed forest that enhances its beauty and views.

But we remain in our main path and after having crossed the Mucciata Fountain, we arrive at Portella Miraglia (1500 m. S.l.m.) at the SS289, about 15 kilometers from Cesarò and San Fratello. 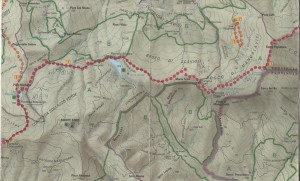 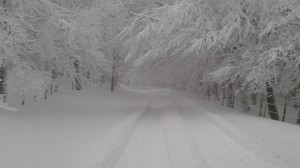 Beautiful path where a camera is not enough!

It is the most important and well-known stage of the Dorsale dei Nebrodi.

The track, initially flat, crosses an area adjacent to the beech forest of Monte Soro, where the bunker areas of the numerous fussuni are clearly evident.

Walking along this panoramic view (with a view also on the Aeolian Islands) trazzera reggia, after about 2 kilometers, you arrive at Portella Calacudera.

Here on the right you can continue on the paved stretch that reaches Monte Soro (1847 m.s.l.m.), the highest peak of the Nebrodi mountain range.

The walk in the woods allows you to see, just before the summit, the monumental Acero montano, one of the largest in Italy (22 meters high and about 6 meters in diameter).
If instead of turning to Mount Soro you continue to walk you head, always soaked in this beautiful Sollazzo Verde beech forest, towards Lake Maulazzo (1400 m.s.l.m.), an artificial overflow of 5 hectares. Here is also a nice equipped area.
From Lake Maulazzo it is possible to descend towards the north by taking the Agrifogli path.

The route allows, in a single day, to meet various environments of considerable interest: elements of the Mediterranean maquis, oak forests, meadows, typical agricultural areas, beech forest, and an extremely rich undergrowth of magnificent holly.
Just beyond is Lake Spartà, another of the many small wetlands of the Nebrodi. 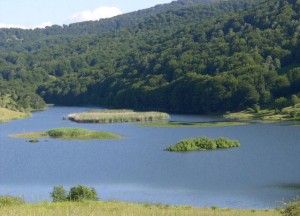 Continuing, after 2 km, you arrive at the Passo Taverna junction and after a further 2 km to Lake Biviere 1278 m. s.l.m., the largest lake basin in the Nebrodi area, where you can admire several specimens of water birds.

An enchantment with the dense woodland vegetation made up of beech trees and the undergrowth of holly, yew, bramble, wild apple, perastro, hawthorn and dog rose. Here is also a nice equipped area.
The romantic lake has an area of ​​about 18 hectares. The presence of water in a mountain area, inside a beech forest, is a real point of reference for the life of numerous species of water birds and for the resting of migratory birds during their mysterious and millenary journey.
Of particular interest is a natural phenomenon that occurs during the summer, when the waters of the lake turn red due to the flowering of a microalga scientifically called Euglena sanguinea.

Not even talking about the superb views, worthy of a set at Harry Potter, ranging from the many colors of the lake, to the birds, to the forest, to the impenetrable populations of hydrophilic plants.
We are in the heart of the park, in the Scavioli beech forest, amid woods and cartoon landscapes!

After passing the Cesarò bivouac, you enter the dense Mangalaviti Wood, made up of the usual imposing high-trunk beech trees of great naturalistic and landscape value and from where, peering through the trees, you can admire both the Rosmarino stream basin and the Rocche del Castro.
A place of extraordinary beauty and great beauty, the Mangalaviti wood falls largely in the territory of the municipality of Longi and the municipality of Bronte. It presents not only beech trees but also ash trees, hollies, maples, perastri, wild apple trees and badgers.
Adjacent to the forest is the Serra del Re which, with its 1754 meters, is one of the highest peaks of the Nebrodi. Climb it and immerse yourself in the magnificent panorama.
From the Mangalaviti forest it is possible to reach even one hour, Portella Gazzana, to the north, between Longi and Galati Mamertino. A point of reference for the use of the Park in the square is an Information Office and a refreshment area. From Portella Gazzana the itineraries depart towards the Rocche del Crasto and towards the Mangalaviti Forest, in fact. 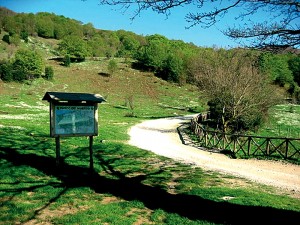 But we continue to the Dorsale where it is a classic to meet piglet and wild boar families ...

About eight kilometers after the Mangalaviti forest one arrives at Portella Dagara 1467 m s.l.m.

From here it is possible, taking a quick detour to the right, to reach two beautiful stretches of water: Lake Cartolari (1390 m) and Lake Trearie (1435 m).
Lake Cartolari is a small water eye at the foot of the Piano di Palma, not far from Lake Trearie. It is home to both sedentary and brisk fauna, such as the water lallin, the heron and the mallard. The pond is surrounded by pastures and magnificent oak and beech woods.
It is also a sort of kingdom of mushrooms with excellent porcini mushrooms and champignons on all of them.

The neighboring Trearie (1435 m) is the highest altitude lake in Sicily.
Quite large, it was formed following a landslide, and is located on the border between the municipalities of Randazzo (Ct) and Tortorici (Me), in the Cartolari-Faranda area. Due to the prominent place it occupies from an environmental point of view, it constitutes an integral nature reserve and is a stopover destination for various migratory birds. The Saracena torrent, one of the main tributaries of the Simeto, originates from it.
Taking up the ridge, you walk between pastures and valleys that steal everything a human being needs to "see": eyes, heart and head.
A little further on, you reach yet another stretch of water, Lake Pisciotto, at the foot of Mount del Moro or Pojummoru (1433 m.s.l.m.). Also called Lago Batessa, it has a very rich hygrophilous vegetation and the usual, beautiful resident and migratory birds, as well as amphibians and various species of arthropods.

Further downstream, the road that leads to Portella Mitta 1244 m begins. s.l.m. We are in the territory of Floresta (1275 m s.l.m.), the highest municipality in Sicily.

map
The Calagna valley is just few steps away from the little town of Tortorici, at 700 m. a.s.l. Full immersed inside the Nebrodi mountains,the valley is renowned beacuse of the Petagna saniculaefolia,a...
map
A great and magic place. The best way to approach it is from Montalbano Elicona. Located between the Peloritani mountains and the Nebrodi mountains, the Malabotta wood (700 - 1300 m asl)...
map
Sperlinga cave A cave inhabited since prehistoric times in a position that, even today, is almost primitive; in the forest, hidden, and almost inaccessible! A very curious place, extremely...
This site uses cookies. By continuing to browse the site, you are agreeing to our use of cookies.
Ok Find out more