Licata
All the places

Phyntia, probably the name of the powerful Licata of the Greek epoch (4rth century BC) preserves traces of its glorious past (not only Siceliot) that are scattered around the territory and in the city. In general, one can say that the morphology and strength that characterizes this area comes from the River Salso that back then gave rise to a rich plain, called the Plain. The central town was positioned on the western edge of the Gulf of Gela, and located near the hill that is called the Mountain. 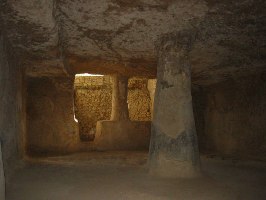 Ipogeo Stagnone Pontillo (photo 1): near the San Giacomo civilian hospital, one finds these stone caves characterized by three fat columns that were once more than 2 m thick and 4.5 m high. The main room and the vestibule are quite large, respectively 145 and 65 square meters. The room has various niches that perhaps illuminated it (with lamps) and three holes in the ceiling that were likely air and light intakes. The intended use remains unknown but the hypothesis in these cases, are always the same: monumental tombs or a place of cult worship. Probably originating from the Neolithic period (5,000 BC), there is evidence of graffiti and wall engravings, some of which seem “signed” in various languages and from various periods, testifying to the passage of innumerable visitors: Phoenecians, Iberians, Arabs

The wealthy city of Phintia was located in the vicinity of Mount Sant’Angelo and today one can see the few remains of the houses in the area high up Santa Maria.

Various buildings have come to light arranged on the terraces. Preserved in a few of these, are dividing walls and on them are visible a few frescoes and stucco paintings. Traces of the walls are still being discovered. Remarkable is, the treasure of la Signora (our Lady) which consists of a necklace, rings, other gold jewelry and 400 silver coins.

Another site is Grangela, near the town hall, in the center of town. It is a very old and deep well, some 17 meters, continues through the rock with a little gallery, 2 meters high and 7 wide. Practically perfect, it served as the water source for the town.

In the center of town, on Via Marconi, is a prehistoric tholos (circular tomb). 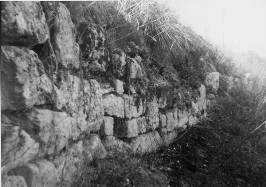 The phrourion (Greek military outpost) of Falaride, is found on top of Monte Sola (171 meters) overlooking the Sea of Licata.  Here in the northern hills of Cipriano stone megaliths were found, arranged in the form of a wall (photo 2). These walls, with a thickness of 2.5 meters, and that extend for a few hundred meters, are only visible from outside the perimeter. Are made by irregularly shaped stone and have a staircase that takes you to a round top. Legend says that it was built by Falaride, the tyrant of Agrigento from the 6th century BC, who passed on because of the cruelty of his invention, the famous bronze bull where the prisoners were put. Once inside was  lit a fire under the belly of the bull and the metal began to heat. The poor guy inside would be screaming loudly in pain. The punishment was considered “genius” because the mouth of the bull was open and the screams made it seem like the bull was alive.

North of Licata is Mount Petrulla (235 meters) more a ground swell than a true mountain. It is in beautiful agricultural countryside, and has an interesting necropolis from the Bronze Age (10th century BC).

The Mollarella, instead, is a splendid beach of Licata that is beautiful in summer. It was a frequently used emporium of commerce and there are faint traces of a glorious past.

In front of this beach in 256 BC, there was a battle, the first big naval battle between the Romans and the Punics. It was on this beach, on the 10th of July 1943, that the United States Marines landed. 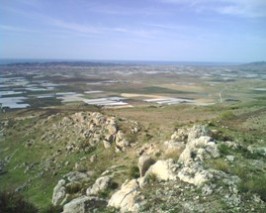 At the foot of the Poggio Mercato d’Agnone (photo 3), are ruins of what must have been an important city of the 4th – 3rd centuries BC. This tell us the coins of Agatocles found here and a wall that extends for about 3 kilometers. In the fortified area a path was discovered, made by cutting the rock, still bearing the marks from the wheels, and a semi-circular enclosure that may have been a marketplace or even a themenos. In a dwelling, a little bathing tub was found carved in the rock.

Contrada Casalicchio, is located about 6 kilometers north of Licata. Here is a village that was inhabited from the Neolithic period (5th millenium BC) to the Siceliot period (6th century BC). There is almost nothing there, apart from a Greek necropolis to the east. Many pottery fragments were recovered from this place.

Almost all of the discoveries from these areas are at the local archeological museum.

map
La sede museale è il meraviglioso, cinquecentesco,  convento cistercense di Santa Maria del Soccorso o Badia. Dell’ex convento il museo occupa parte del piano terra e il chiostro. Il Museo...
map
Muculufa The Muculufa is a hill in the Valley of Salso that rises gently to 200 meters but then abruptly jumps up to a jagged rocky ridge that reaches 355 meters. Here there are faint traces of...
map
Mount Saraceno On Monte Saraceno, close to Ravanusa, this was an indigenous center of the tenth century BC which was subsequently Hellenized. Three terraces were discovered up high. On the first...
This site uses cookies. By continuing to browse the site, you are agreeing to our use of cookies.
Ok Find out more