The Thesmophoria were Greek festivals in honor of Demeter Tesmofora (the goddess of agriculture, of marriage and civil life) and her daughter, Persephone (or Kore).
They usually took place in autumn (before the wheat is sown, to ask for a successful future). Only the women participate in these festivals and, here in Sicily, they had greater importance because it was an opportunity for them to console Demeter’s daughter Persephone for the six months she had to spend in the Underworld with her husband-kidnapper Hephaestus, according to the decision made by Zeus (the other six months, those dating from the beginning of spring, March 21, she was able to come back to earth to her mother).
Diodorus (90-27 BC) the Sicilian historian from antiquity par excellance, narrates a series of ceremonies that were celebrated in honor of the godesses: the Thesmophoria, just described, dedicated to Demeter, the Anagoghè, which commemorates the return of Kore (Persephone) to earth; the Katagoghè, which commemorates her return to the Underworld and the Kore Anakalypteria, which recalls the wedding between Kore and Hades.
Their programs included:
The first day (kathodos and anodos, that is downwards and upwards) the women go into the cave sanctuary called Thesmophorion.
The second day (nesteia, that is fasting) the women, remained inside the sanctuary fasting to purify themselves.
The third day (kalligenèia, that is beautiful birth) the women make offerings to Demeter of grain, wine, cheese, oil and other foods, including the cooked meat of the animals sacrificed. They feast, exchange obscene jokes and self flagellate. The ritual also requires that at night, the bones of those sacrificed animals be thrown into the cave or gorge, symbolizing, perhaps, the descent to the Underworld.
Certainly, in these parts, the middle of Sicily, these rituals were acted out with great sincerity.
Within an agricultural landscape that is phenomenally evocative, augmented by the presence of ancient estates (Landro, Tudia, Recattivo), that are now inhabited by no more than two families that retain the typical house structure (house of the master, houses for the workers, chapel, store houses…), one stands before a series of hills of great archeological interest, many of which have yet to be explored.
One of the reasons for this is because they fell into private ownership, into the hands of farmers in the center of the island, that in the meantime became the best archeologists 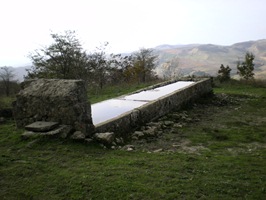 Cozzo Mususino (or Tutusino or Desusino, 860 meters above sea level) above the estate of Landro, one finds a landscape full of splendid, bucolic and seemingly endless fields of wheat that unfolds all around you, providing one of the finest views of agricultural Sicily. The plateau is rich in fragments, and every so often, the ruins of some ancient city miraculously peep out, that was certainly of some import in the Siceliot (Greek) period ( 6th century BC). The whole territory is characterized by a fossiliferous geology dating back 5 million years ago, when the mountains were the bottom of the Mediterranean Sea. In the lower part is a beautiful, ancient watering hole for animals (photo). 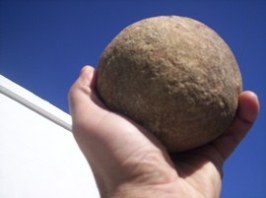 Terravecchia di Cuti: is a few steps from Cozzo Mususino and this other hill that has yielded very important pottery finds, all from the Siceliot (Greek) period (6th century BC). After an inspection of this place, we found a ball that could have been used for a catapult (photo 2), a war machine invented right in Sicily (by the Siracusano, Dionysius 5th century BC). 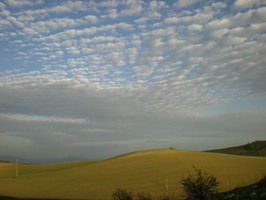 Pizzo del Re: always in the grain fields of center Sicily we arrive at Pizzo del Re. Still here a wonderful landscape and traces of ancient buildings. Unforgettable the silences of the nature.

p.s. The spots are often very hard to reach. Send as an e-mail for more information.

map
Monte Castellazzo of Marianopoli Sitting in the middle of Sicily, in the fields of wheat and the peace and quiet of an agricultural civilization, is Mount Castellazzo, site of an ancient Greek...
map
Sfondato lake (Naturalistic Reserve) Wonderful and small lake immersed among the limestone hills. Almost 15 meters deep it appears mysterious and fascinating in this very quite area of Sicily Can...
map
In pieno centro della Sicilia, questo museo ospitato nel piccolo paesino di Marianopoli possiede una meravigliosa collezione dalla preistoria (V millennio a.C.) all’età ellenistica (II a.C.),...
This site uses cookies. By continuing to browse the site, you are agreeing to our use of cookies.
Ok Find out more