Island of Lampedusa (Natural reserve)
All the places 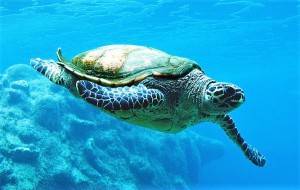 Closer to Africa (138 kilometers) than Sicily (215 kilometers), the island boasts a nature reserve whose apex is touched by the beach on the Island of Conigli (Rabbits) (6000 square meters, on the south coast of Lampedusa) where and arid flora, a fine white sand and crystal clear sea water are the preferred realm of the Caretta caretta turtles, that lay their eggs between the beautiful sand dunes.

It is the only Italian site where the spawning occurs regularly: it hosts from one to seven nests per year.

One of the great natural paradises of the world that seems like a tropical island, where the beauty of the landscape merges with the plants and animals.

The Island of Lampedusa is made of limestone and has a landscape with deep cuts, valleys from an ancient river network that is no longer active: the Vallone Profondo (Deep), della Forbice (Scissors), dell’Acqua, Dragut and Terranova.
The reserve also includes the beach on the Isola dei Conigli together with the nearby Isola dei Conigli.
Geologically it belongs to the the African continental shelf and, in fact, much of the flora and fauna originates from that continent.
Of particular note is the presence of Algerian Psamodromo, also called the striped lizard. It is of African provenance and in all of Italy, it can only be seen on the Island of Rabbits. It is even absent on the Island of Lampedusa and the Teastuggine di Hermann, has become rare over the last century.

There are many species of insects, some which are endemic, like the Pamphagusortolaniae, a grasshopper deprived of wings.
Among the mammals is the mustiolo, the house mouse, the wild rabbit and the black rat.

Belonging to the Pelagie archipelago, its 300 acres still offer refuge to some large birds of prey such as peregrine falcons and queen falcons. The shag is also a unique species to Lampedusa. We call your attention to the presence of Pinna nobilis, the largest bivalve of the Mediterranean, which has become rather rare.

And the fish fauna is rich here, comprising a good 40 different species, including the dusky grouper (Epinephelus marginatus), seen along the coastline of the Isola dei Conigli.

It is possible to see many cetaceans, such as dolphins, fin whales, sperm whales…

The vegetation is characterized by endemic species, rare testimony to the ancient link to the African continent such as the two North African species Carallumaeuropaea e Centaurea acaulis. Typical of Mediterranean landscape are the asphodel flowers, that in ancient times were believed to be flowers of the dead. 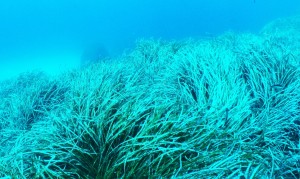 In the surrounding sea there are extended areas of seagrass (photo, Posidonia oceanica), meadows of cimodocea, an algae from the Red Sea (Caulerpa racemosa) …  In the valleys and Cala Galera there are relics of the early Mediterranean, consisting of Phoenecian juniper, carob, rare olive, mastic, periploca seta and marshes of seta 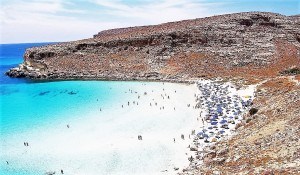 L’isola dei Conigli (the island of Rabbits, photo) The Island of the Rabbits is a small island (4.4 acres), a few meters from the beach of Lampedusa. Once connected to the mainland, it is reached by walking on water, which here reaches a depth of about 1 meter.

The Island of Rabbits is low and completely rocky, and has a maximum height of 26 meters. The flora and fauna are very similar to those of the north coast of Africa; this island is one of the few areas where the sea turtles Caretta caretta lay their eggs. In addition, the island is an important stopping place for migratory birds that arrive in April (spring migration to the north of Europe) and September (autumn migration back to Africa).

The islet is the Kingdom of the herring gull, which has a population of about 100 pairs who nest here.

map
A few steps from the African Sea, this nature reserve is characterized by spectacular flora and fauna: red starfish, unpolluted sea depths full of life, invertebrates and brilliantly colored fauna. It...
map
Isola vulcanica (l’ultima eruzione risale al 1891) di incantevole bellezza, dal mare cristallino e dalle rocce scure, ricca di grotte e testimonianze del passato. Presenta una fitta vegetazione, con...
map
The Stairs of the Turks are a white, rocky wall that slopes to the sea in the province of Agrigento. It is called so because here the pirates took refuge during their raids. It is a very evocative...