Mount Saraceno
All the places 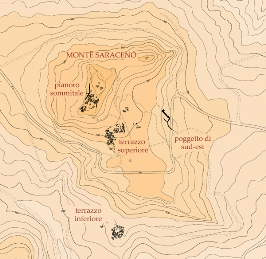 On Monte Saraceno, close to Ravanusa, this was an indigenous center of the tenth century BC which was subsequently Hellenized. Three terraces were discovered up high. On the first two there are ruins of two towns of the 7th century and 6th century BC while the upper one was the seat of the acropolis, as evidenced by the  few ruins of many sacred buildings.

The city was completely fortified and to the east one can see a faint trace of the city walls. The necropolis was found in the south and west of the mountain. The countryside is beautiful and full of Mediterranean olive trees.

The many findings were moved to the regional museum in Agrigento.

map
Muculufa The Muculufa is a hill in the Valley of Salso that rises gently to 200 meters but then abruptly jumps up to a jagged rocky ridge that reaches 355 meters. Here there are faint traces of...
map
Piccolo museo ma ricco di splendidi reperti che provengono soprattutto dal limitrofo sito archeologico di Monte Saraceno. Segnaliamo: un fantastico vaso globulare su alto piede del X secolo a.C....
map
This is an early Christian necropolis, 20 m long, and in the area of Canale close to Naro. It was used between the 4th and 6th centuries AD. Its surroundings have returned a bronze coin of Valentinian...