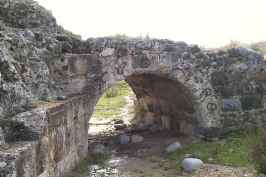 This area west of Paternò, behind the river Simeto, is what we will talk about now. The river, infact, has always been an important element in establishing ancient settlements. The Simeto river, being the longest river in Sicily, has seen many inhabitants in its vicinity.

Leaving from the 1800’s  Horse Breeding in the middle of the countryside and preferably with a map in hand, looking towards Simeto, one arrives at the Ponte Romano di Pietralunga (photo) (a Roman bridge). There are very few remnants left, of what was once an important bridge.

A little beyond are the Salinelle del fiume, volcanoes of mud (typical in Sicily). One can, therefore, decide to climb Mount Castellaccio (225m), the seat of a settlement of 2000 BC. There are few traces of an oval shaped hut with a terracotta platform in the center, a few hand tools, seeds of grain and orzo, Greek pottery from the end of the 8th century BC.

Leaving the mountain and continuing to walk in the direction west, among the undulating hills, one arrives at Poggio Cocola, another settlement from the Bronze age that was subsequently Hellenized. Its broad plateau sits in a beautifully  panoramic position. Someone hypothosized that this area was the seat of the unobtainable, archaic Inessa. Walls and ruins of buildings have left people wondering about the presence of an important city. The area has some rock-hewn tombs of the 5th century BC and moreover, in the highest part, a majestic structure called Castello di Poira (photo)

There is a fortified farm belonging to some important person and perhaps on the site of a pre-existing ancient structure.
Just beyond one finds the Grotto of the slaves, second an Ergastulum romano, where the slaves went at the end of the day.

map
Solo la sede del museo vale il prezzo del biglietto: il castello normanno a pianta rettangolare, di 33m di altezza, del XII secolo Il museo ospita soprattutto materiale proveniente dal territorio di...
map
In the western part of the province is the Greek city of Adrano dating from the 5th century BC. It was one of the most important in Sicily. Today it’s ruins are sadly encased in cement. What...
map
Cassataro cave n the Picone area, behind the river Simeto, is the grotto (covered) where there are a few carvings made by prehistoric Sicilians (5000 BC?). They are pictures in red ochre, among...
This site uses cookies. By continuing to browse the site, you are agreeing to our use of cookies.
Ok Find out more