Monte Catalfaro
All the places 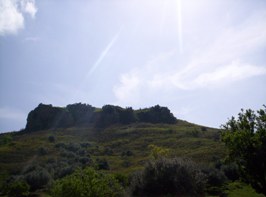 The “rock mouse” (Monte Catalfaro in Arabic) is a beautiful rocky plateau with the plain of Catania below. Full of orange groves now, the plain were once crossed by a lush forest and river. Surrounded at various points by the typical burial caves (especially the district of Porrazzelle) hewn in the rock (just like the others mentioned earlier), the mountain contains remains from several different ages. There are ruins (there had been a castle on top), and buildings with large quantities of pottery buried in the surrounding soil, that date from the Bronze Age, the Sicilian-Greek period and up until the High Middle Ages.

In reality, Monte Catalfaro consists of two hills connected by a narrow saddle. In particular, the eastern hill contains the remains of the ancient bronze-age village and was the indigenous center of the Greek era. The western hill is truly the “Monte” and where one finds the remains of the Swabian age castle.

Among the items pulled from the digs, is a complex bronze pendant, consisting of a ring from which hangs six chains and three pieces of mesh (museum of Mineo)

map
Caratabia caves There are two rock-cut grottoes in which one can see magnificent graffiti. The grotto on the left consists of two rooms. In the first, the bigger one (7.50 m x 4.2 m), there are...
map
Ospitato in questo delizioso paesino della provincia di Catania, dentro l’ex seicentesco convento dei Gesuiti, ospita reperti della ricchissima zona archeologica dei dintorni: dalla preistoria al...
map
Housed in the eighteenth-century Interlandi masseria, in one of the most evocative places of the whole Sicily, the museum stand on the slopes of the homonymous archaeological area. Among prickly pears...