Megara Iblea
All the places 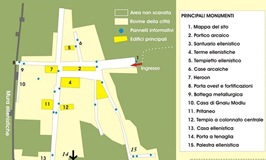 One of the most powerful Greek colonies of Sicily. It was founded in 729 BC by colonists originating from Greek Megara Nisea and led by the ecista (commander-founder) Lamis.

When they arrived, they were greeted by King Hyblon, who preferred to mollycoddle rather than defend his city. The Greeks were grateful for this and gave the city a double name: Megara like the Greek city from which they originated and Ibla like the Siculi King that they found. Not long after, Megara became one of the most powerful Siceliot cities (Greeks of Sicily).  According to Thucydides, Selinunte was founded in the mid-seventh century BC, by the Megarian people. 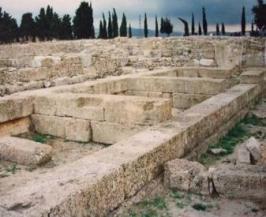 During the Second Punic War (214-212 BC) it stood behind the Syracusans and for this reason the consul Marcellus destroyed it.

The city now looks exactly as it once did, certainly the city plan, (not the buildings), somehow having been preserved by a constant (and almost inexplicable, given the location) isolation of the site. In recent decades, Megara has been literally surrounded by an industrial area and besides lending a special charm to the area, it has really been put in a glass case and thus protected.

One enters the area from the north side and begins to walk by the very beautiful ruins of the city with the roads virtually intact. 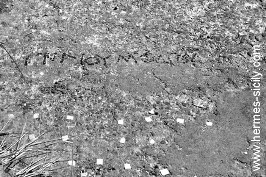 Near the sea, one can see impressive ruins including the Agorà, the urban structure, and the remains of the walls, houses, temples… a walk in the ancient city near the Siceliot sea which looks out towards Greece. Of great impact, in the western side, the city wall. Just close to this, on the southern side, is a beautiful house with a mosaic floor that even now has the owner’s name engraved in it, Gnaiou Modiou. 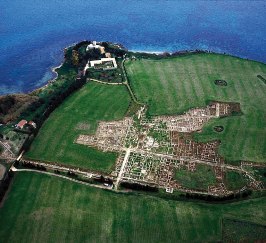 In the Agorà, in the north-east corner, is a little Hellenistic sanctuary preceded by two altars. Inside are some clay tubs and circular slabs of lava for cult worship. Also in the Agorà are the remains of two stoa (porticos): from the Archaic period (7th century BC) and the subsequent Hellenistic.

Here are the baths, with mosaics and traces of the galleries where the water was heated.

Flanking the spa is a gym with different rooms. There are many columns here of which those in the sanctuary are beautifully worked.

On the southern edge of the city are the ruins of a gate adjacent to the road that led to Syracuse. 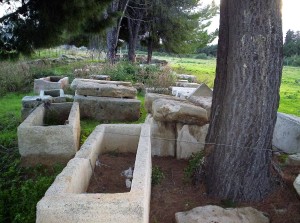 The city was surrounded, on its outside perimeter, by many necropolis. A few of these tombs are visible on the western part outside the wall. Wonderful artifacts have been found which were moved, principally, to the Archeological Museum of Syracuse.

Some of the masterpieces include, the “Kourotrophos”, the arcaic statue in limestone called “Dea Madre” (Mother Goddess) on the throne (6th century BC), breastfeeding the twins on her lap; the marble torso of a youth, kouros, on which still bears the inscription, Greek writing on the thigh, in Doric style; and a particular theatrical mask from the 6th century BC.

map
It is a village fortified in the Neolithic period (8000 BC) that gave its name to an eponymous culture, Stentinello. Walking through the village you can see the holes that held the poles for the...
map
37° 6'25.55"N   15°11'29.82"E  (Via Mario Francese, 29 - 96100 Siracusa)   The Palombara Cave, visited by man for thousands of years and animals before...
map
Wonderful naturalistic place alongside the archeological peninsula of Thapsos. The main point of natural interest in this reserve is related to its role as a rest area, nesting and wintering...
This site uses cookies. By continuing to browse the site, you are agreeing to our use of cookies.
Ok Find out more