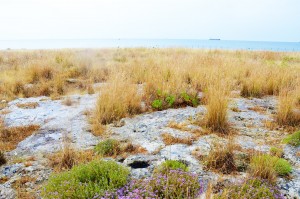 It is a village fortified in the Neolithic period (8000 BC) that gave its name to an eponymous culture, Stentinello.
Walking through the village you can see the holes that held the poles for the rectangular huts (photo). The village has a fortified trench, carved into the limestone and reinforced with stone on its inside.

The settlement appears today as a ditch dug in the rock in the shape of an oval about 200 x 180 meters.

The civilization itself is characterized by typical Stentinello caves dug into the rock, but also beautiful ceramics: polished with a paste decoration and etched by the use of punches or shells or with the use of the nail, which gave rise to a zig-zag or diamond design and the distintive stylized human eye, probably used to keep away evil spirits. 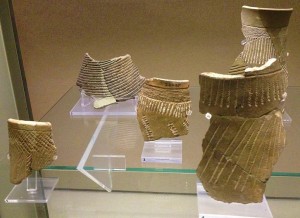 Typical are jars with the human face, statuettes and figures of animals.
Flint and obsidian tools were preferred here prior to the time when metal was known.

map
Wonderful naturalistic place alongside the archeological peninsula of Thapsos. The main point of natural interest in this reserve is related to its role as a rest area, nesting and wintering...
map
Thapsos In the north environs Syracuse one finds an extraordinary small peninsula full of Mediterranean charm. Thapsos is a very important prehistoric site (middle of the Bronze Age, 1500 BC)...
map
Megara Iblea One of the most powerful Greek colonies of Sicily. It was founded in 729 BC by colonists originating from Greek Megara Nisea and led by the ecista (commander-founder) Lamis. When they...