Monte Altesina
All the places 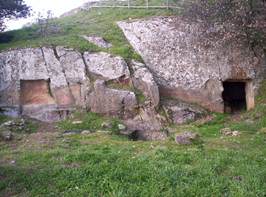 According to the Arabs, this was the trigonometric point of Sicily, from which the island was divided into three equal pieces: the Demone Valley on the east, the Valley of Mazara on the west and the Noto Valley on the south.

A splendid mountain, the Altesina retains traces of the past and a wild vegetation that make it a truly unique place. Climbing towards the top one sees a series of archeological remains such as a small monastery perched on a small rocky mass, a series of rock tombs and finally, the top, with signs of an ancient city that has disappeared.
A cave, that was probably religious, bears an inscription on its outside in Siculo that is untranslatable!
This place has a very high energy concentration….

map
Monte Altesina (Naturalistic Reserve) Mt. Altesina, with its 1,192 m. a.s.l., the highest summit of Erei mountains, feeds the main spring of the river Dittaino. On the summit, there is the relict...
map
In the hinterland of Sicily we can find this Natural reserve characterized by the presence of the Karren (picture) a sort of limestone pavements created by the superficial erosion of the evaporitic...
map
Between the towns of Sperlinga and Nicosia, at the feet of the Zimarra mountain, there is this oak forest. A path leads on the top (1000 meters) of Monte Zimarra. In the area there are a lot of...
This site uses cookies. By continuing to browse the site, you are agreeing to our use of cookies.
Ok Find out more