Mozia and Marsala
All the places 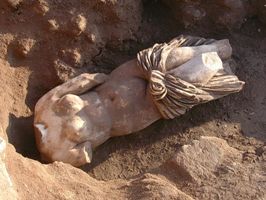 The photo shows the discovery of a bust of Venus of Marsala probably of the 4th century BC.
This speaks volumes about the importance of ancient archaeological Lilybaum now Marsala (Mars Allah, Allah’s port).
On the Piazza della Vittoria is a luxurious roman house, with a beautiful mosaic floor and spa. Clearly visible is the frigidarium (system with cold water) and the calidarium (section with hot water). 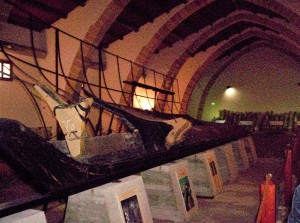 Of great appeal is the Punic Ship here in the Baglio Anselmi Museum, which tells us a lot about the battles fought here. Possibly the wreck sank during the battle of the Egadi in 241 BC, ending the First Punic War.  The ship was rebuilt in the museum and you can see the hull and the port side aft.  Along with the ship, they also recovered part of the load it carried.

Opposite Marsala is the small Island of Mozia, a punic stronghold since the 12th century BC. It was the site of the first emporium of these merchant people from Asia. Today, we can see splendid ruins on this tiny island, that is reached by ferry from nearby Marsala. Once there, you breathe the air of the past.

Stroll the little island that was an important phoenician port and see the underwater archaeological finds. 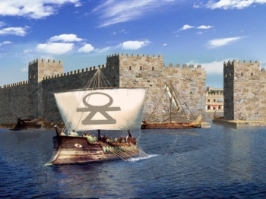 You will see a lot of interesting ruins: the fortification, about 2.5 kilometers long (reconstruction pictured), that enclosed the entire island (particularly in the south-east and north). The north entrance door that leads into the city streets is sometimes paved with blocks of limestone in which the ruts of wagon wheels are still visible; several buildings belonging to different centuries; the so-called Sanctuary of Cappiddazzu, near the north gate, from the 7th century BC where they held sacrifices (they have found animal bones inside); the archaic necropolis with tombs on the north coast consisting of small pits dug into the rocks or soil, that contained the urns with the remains of the deceased and other funerary objects. 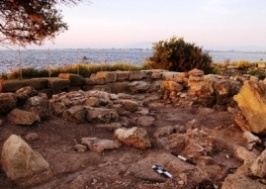 But certainly the most significant ruin is the Tophet (60 m in length, photo) which is located on the northern coast, in the space between the sea and the walls. Here the children were sacrificed to the god Moloch. This custom was abolished as macabre by the Greeks, as a condition of surrender, after they defeated the Carthaginians at the Battle of Himera (480 BC).

In the center of the island was the town itself, with grid-like streets.

In the southeast is the so-called House of Mosaics with a courtyard and a checkerboard terracotta floor.

Of particular interest is the Kothon, a sacred pool fed by a fresh water source