In the territory of the town of Sciacca, city of spas, on Mount San Cologero or Mount Kronio, the reserve has a natural system of underground caves: Stufe di S. Calogero, Grotta di Lebbroso (Leper), Grotta di Mastro, Grotta Cucchiara and Grotta Gallo.
The caves were inhabited from the Middle Neolithic period to the Copper Age and they verify the second volcanic phenomenon that brought much sulpher vapor and raised the temperature (causing the inhabitants to flee!).
The mountain, of limestone-gypsum, is mostly covered with rocky vegetation, while at the top, near the Sanctuary, a pine forest appears. 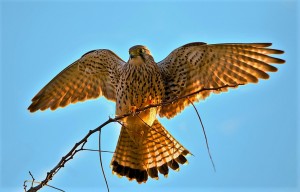 On the top of the mountain we can admire sevferal birds of prey, among others the kestrel (photo, Falco tinnunculus) and the eagle (Hieraetus fasciatus).

map
The museum is located on the top of Mount Kronio. The caves in the area have returned findings from prehistoric and historical times including forty large vases of the third millennium BC. Inside the...
map
Caltabellotta A very ancient city, which is immediately apparent just after entering, where there are 22 tombs and grottoes of prehistoric origin. The necropoli are all over and Caltabellotta is...
map
Housed inside the archaeological area of the same name, it preserves the finds of the homonymous Greek-Punic site (IV-V century BC) of Monte Adranone, including a series of prestigious bronze belts...
This site uses cookies. By continuing to browse the site, you are agreeing to our use of cookies.
Ok Find out more