Serra Vito Soldano
All the places 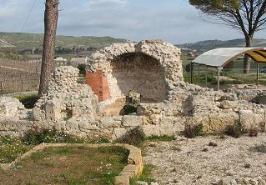 Greek-Roman-Byzantine site (5th century – 4th century BC) that was located along the Katane-Enna-Agrigentum route and that perhaps corresponded to Corconiana, one of the eight stops on that important thoroughfare. The network of stations, which were the backbone of the ‘cersus publicus’ that is, the Roman postal service, guaranteed the travelers safe passage with stables, taverns, stables for horses… Between one station and the next there existed so-called mutationes, or small rest stops for the animals, at around 10 or 15 miles from one another. These roads were then incorporated into the Tabula Peutigeriana (a sort of road map), and linked villas, farms and estates; Corconiana, located at the Itinerarium Antonimi, 13 miles from Agrigento, played a major role from an economic, social and political standpoint.

Besides the numerous artifacts (blocks of stone, a clay oscillum of the second half of the 4th century BC with the figure of a female face, coral lamps, fragments of vases, bowls, ointment jars of glass, and various pottery fragments..) in an area of 40 hectares, Roman baths (photo) have been unearthed, a classic finding at a resting place.

A legend says that in this area is hidden a mysterious ancient treasure, whose find could bring richness to all of Sicily.

map
This is an early Christian necropolis, 20 m long, and in the area of Canale close to Naro. It was used between the 4th and 6th centuries AD. Its surroundings have returned a bronze coin of Valentinian...
map
Soprano Lake (Naturalistic Reserve) It’s a natural lake in elliptic shape. It’s also called Cuba since its landscape resembles caribbean atmospheres.     The fauna hosts foxes,...
map
Monte Conca (Naturalistic Reserve) Monte Conca it’s a limestone plateau characterized by a geologycal formation of 5 millions of years ago.   It’s crossed by the river Gallo...
This site uses cookies. By continuing to browse the site, you are agreeing to our use of cookies.
Ok Find out more