Pantalica and Anapo valley (Natural reserve)
All the places 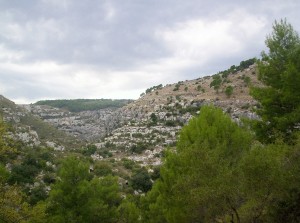 A Unesco World Heritage site, Pantalica is a marvel of Sicily, an archeological and naturalistic masterpiece. It is a vast, vast canyon (“cava” in Sicilian) of nearly 4,000 hectares and unique characteristics: At the top is unique archeological testimony from the prehistoric to the Byzantine ages; on the steep limestone cliffs there are about 5000 cave tombs carved in the rock; and at the base, a river flowing through lush Mediterranean vegetation.

Pantalica is truly breath-taking, a good part of it still to be explored. It is a realm of silence, of raptors flying over these deep and mysterious gorges, of the most excellent example in the world of funerary architectural ruins. As if that wasn’t enough, there is a megalithic building (Anaktoron) of unknown origins.

A railway line (photo), today entirely underground, enables you to walk with swelling emotions: through old tunnels, with the sweet melody of flowing water from the river at your side, and with the high walls of the canyon dominating the sky. Imagine how lovely it was to go for a train ride through these parts!

The reserve comprises the Anapo river valley on of the longest rivers on the island and the principal river of the Iblean mountains, that over time eroded the limestone over which it flows, living rise to the characteristic canyon surrounding the archeological site of Pantalica.

There are two Karst cave, the cave of the bats and the Found cave.

But Pantalica is, first of all, the valley of the River Anapo, clear and fresh.

The water is inhabited by crayfish and the painted discoglosso, a rare frog

A vast list of fauna could be attached to the information card for this reserve. We want to mention on the rare Riccioli snake, a snake known in the countryside of the island, the terrestrial testuggini, the eagle of Bonelli (photo), the hoopoe, wild cats and matrens.
In summer, do swim. The water is so fresh and on the mountain it may be 40 degrees hotter. It is a fabulous experience.
All of this between the plane trees and oleanders.

Pantalica is accessed either from Ferla or from Sortino.

Access from Ferla: from this village, a beautiful road sneaks up to the top of the canyon. After about 6 kilometers it reaches the Byzantine village of San Micidiario, characterized by the presence of several homes and altars carved into the rock (here everything was carved, not built). A little further on are the ruins of Anaktoron, the palace of the prince. After about another 3 kilometers (9 in total from Ferla) and after having passed another Byzantine village (Cavetta), the road ends in the upper part of the mountain. A stone staircase brings you, amidst breathtaking panorama, caves here and there, and the mighty necropolis carved in rock, to the river below.

Accessed from Sortino: after about 10 kilometers from Sortino, you reach the opposite side with respect to Ferla (practically speaking, the two entrance points are just separated by the the huge river valley below). Here, too, it begins to descend into the valley, across several beautiful caves (including the huge bat cave) and the spectacular necropolis, leaning on the front of the precipitous walls.

Pantalica, is, in short, unforgettable.