Valle del Morello
All the places

This is a wonderful part of Sicily, right in the middle of the island, that is characterized by a series of grand masterpieces of archeological nature. In this valley, the river Morello, was the true catalyst for these settlements, as well as those from past times. The Morello, in these parts, was incorporated into a dam. In this way it seeming a lake. The landscape is stunning. All of the sites can be seen in the span of one unforgettable day. Strictly speaking, a few are not part of the valley, but close enough to be easily included in the context of a day of exploration. They are here described in logical order, more or less, for a visit.

Monte Giulfo: at 761 meters high, this was frequented in prehistoric times by the Siceliots (fifth century BC). One can see a beautiful necropolis, with eleven cave tombs at the bottom part of the site.

Climbing a little, there are three big, square, hollow caves that are completely intact.
A little further up one comes to the acropolis, which is in a superb panoramic position. Here there are a series of rooms with large pithoy, jugs made of pottery for storage of food. There is also a very beautiful ceramic floor 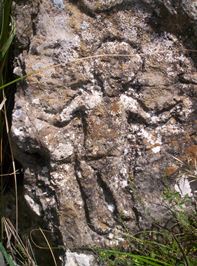 Rocca Danzese: Crossing a landscape that is truly unique, with cows, abandoned strongholds and obsolete sulphur mines, one comes to the top of Rocca Danzes almost in front of Monte Giulfo. Here is a figure sculpted in the rock (photo) that absolutely resembles the Mother god but whose exact history is unknown. Who put it there? Who carved it?

Gaspa: This is an area, a valley, that also has a few remains of obsolete sulphur mines, a walled farm and a Paleo-Christian necropolis (5th century AD) set in an evocative forest of conifers and eucalyptus trees.

Lago Stelo:Above the necropolis of Gaspa is the beautiful site of Stelo Lake, in an area that is extraordinarily bucolic. Stelo Lake was reclaimed during the regime of the Fascists (before ‘900) and appears like a vast and magnificent green area during the springtime. On its margins, on the southern side, overlooking the necropolis of Gaspa, is the highest point of Mount Gaspa. Here one can see a series of carved works in the hard sandstone that presupposes the presence of a sacrificial sanctuary. 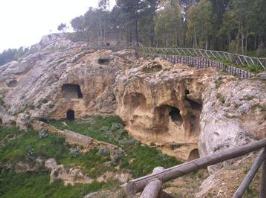 Canalotto:This is truly a city of the past, carved in rock and dominated, above all, by the presence of a river (now almost dry), a tributary of Morello, downstream. It is accessed across a beautiful planted area that skirts the cliff, approaching the valley. The visual spectacle of these rocky buildings is really sublime. Among the houses, pigeons and churches, one dives into a Troglodytic world.

Realmese:Realmese, (city of the dead), with more than 300 tombs carved in rock, a ‘grotticella’ cave (a type of artificial cave that resembles an oven), dates from the 9th century BC. It is found in the area called Cozzo San Giuseppe (737 meters high), three kilometers northeast of Calascibetta.

map
Palazzo Varisano, è un edificio costruito nel XVIII secolo sui resti di un più antico edificio cinquecentesco di cui restano ancora tracce negli ambienti del piano terreno. Il museo illustra le fasi...
map
Pergusa (Cozzo Matrice) Enna, the navel of Sicily, lies on the top of a rock with its almost 1000 meters of altitude. A beautiful castle dominates the highest point of this city, which, over the...
map
GPS CAPODARSO: 37°29'40.02"N   14° 8'51.43"E A mountain, a bridge and a source, that is: Etna, the Capodarso bridge and the Aretusa fountain in...
This site uses cookies. By continuing to browse the site, you are agreeing to our use of cookies.
Ok Find out more