Pergusa (Cozzo Matrice)
All the places 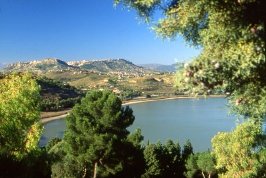 Enna, the navel of Sicily, lies on the top of a rock with its almost 1000 meters of altitude.
A beautiful castle dominates the highest point of this city, which, over the course of millenia, has watched over Siciy as if it was the grand eye of the island.
A town with a very strong medieval feeling, it also has the fascinating and mysterious Lake Pergusa at its feet. Legend has it that from a nearby gorge (Cozzo Matrice, see below) the beautiful Kore (Persephone) was kidnapped by the god of the underworld, (who was also her uncle): Hades for the Greek ( Pluto, for the Roman). Mother Demeter, goddess of fertility, asked her brother Jupiter (not just anyone) for help and threatened to make everyone on the planet starve unless he settled the matter.
Jupiter, who by nature was someone who wanted nothing to do with problems, cut the cake, make no mistake, in two perfectly equal parts.Established was the fact that for six months a year, Kore would share the underworld with her husband-kidnapper and for the other six months, she would return to her mother. The day of her return was to be March 21st: the first day of spring, which each year refills the land of Sicily with flowers and fruit for 6 months.
Beyond mythology, we have to consider what is really fascinating and historic: that for centuries, the cult of Demeter (and Kore) was the most revered and important of the island, as is evidenced by the many discoveries of objects (sculptures, coins engravings….) that were dedicated to the two women.

Here we are just a stone’s throw from Morgantina, the site from which the stupendous Venus of Morgantina comes (which was probably Demeter, in fact).
The location of the kidnapping, according to the legend, is in the north-west section of Lake Pergusa on Cozzo Matrice (855 meters above sea level).

Here there is an easy climb in which one can see the cave where the kidnapping took place (to be exact, there are two caves at the top, the legendary one is the first one you come to, the one on the north-west, facing the ravine. On the right, a little further on, is the other). 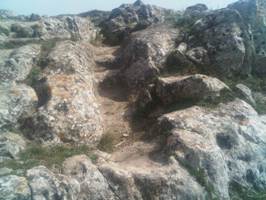 Cozzo Matrice is a beautiful place that situates you in the exact middle of Sicily, and rewards you with bucolic perfection.

Goats graze and shepherds roam the borders; from the top you can twirl around with open arms and see the entire valley spread breathlessly before you through fields of wheat, horizons of hills, a crystal clear blue sky, and both wild and farmed vegetation.
One breathes the air of mystery and sees the power of nature.

The water of Lake Pergusa below is like glass, a perfect watercolor painting by God. And the ruins of an ancient settlement complete the scene.
Everything speaks to a distant past: a room for rituals carved in stone, ruins of a workshop of the Copper Age, holes in the rock for the insertion of poles for huts, and traces of a few hearths.
In the south-west part of Cozzo, one can see rocky caves, probably prehistoric settlements and a beautiful necropolis. Right at the top is, what was perhaps, the ruins of the most important sanctuary.
Who knows how much worship there was in these parts for the goddess of the Sicilian godesses: Demeter.

map
Palazzo Varisano, è un edificio costruito nel XVIII secolo sui resti di un più antico edificio cinquecentesco di cui restano ancora tracce negli ambienti del piano terreno. Il museo illustra le fasi...
map
In the middle of Sicily, here it is this lake set between a group of mountains in the Erean Mountains. It is a vital stop in the migratory trajectory of a great number of birds. The lake is...
map
Valle del Morello This is a wonderful part of Sicily, right in the middle of the island, that is characterized by a series of grand masterpieces of archeological nature. In this valley, the river...
This site uses cookies. By continuing to browse the site, you are agreeing to our use of cookies.
Ok Find out more